For some reason my 4 year old OCd acer V226HQL feels snappier even with less smoother 75hz than my Dell S2716DGR 144hz which shouldn't be possible, but im hitting a lot more shots on the acer 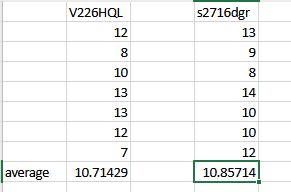 How am I getting the same mouse to screen time on a 80$ monitor as a 350$ monitor which has one of the best input lag scores on RTINGS??
Top

Much bigger resolution (almost 2x bigger) and you might be used to heavy input latency on the Acer.

The G-sync module might also be influencing perception as well.. DP is also a fast connection.. way too many variables.

If you want a quick confirmation, drop mouse polling rate down to 250hz for example. If it feels better, than panel is just significantly faster.
Top

The G-sync module might also be influencing perception as well.. DP is also a fast connection.. way too many variables.

If you want a quick confirmation, drop mouse polling rate down to 250hz for example. If it feels better, than panel is just significantly faster.

While there are many variables, the poll rate 250 Hz versus 1000 Hz will not confirm the speed of the panel. That's just placebo.

There are other mousefeel reasons (250 Hz vs 1000 Hz preference) but does not confirm the speed of the panel. I've seen laggier panels feel better, and less laggy panels feel worse, because of some surprising technology reasons (including different GtG curve shapes, i.e. laggier to GtG10%, less laggy to GtG50%, and much more laggy to GtG90%) -- www.blurbusters.com/gtg-vs-mprt ... It's University calculus-algebra amazing stuff. And the lag of each pixel on a screen plane is often different, especially when cable scanout and panel scanout is asymmetric -- www.blurbusters.com/scanout .... And the beat frequencies / harmonics (aka stutter) that massively overlap (Frame rates, refresh rates, poll rates, etc). So do not judge the book by the cover. It's thousands time more complex than anyone here thinks, latency is not a single number.

Yes, by chance, a better mousefeel can sometimes occur with some variables at 250 Hz because something happened (e.g. different beat-frequency effets) but definitely does not "determine" a faster panel.

I still recommend 1000 Hz+ if you have a good mouse sensor.
Head of Blur Busters - BlurBusters.com | TestUFO.com | Follow @BlurBusters on Twitter

Well.. misleading or not is quite situational to how you perceive that advice no?

I will generally agree that regardless of the actual numbers, the experience can be quite mixed and maybe it was wrong for me to generalize that. Hell even where your monitor and PC is plugged into electrically can significantly impact user perception!

That's not to say that the "better" experience is the absolute lowest visual lag or feel, but a subjective opinion of how a mouse should feel.

You can claim it's "placebo", but the point of setting it to 250hz was to potentially give the user a similar feel to his older panel. I really hate to generalize but that older 75hz Acer likely doesn't have much going for it haha.

I will say I am quite good at determining sensor latency on pre-release mouse sensors. At least.. i'm able to accurately blind test marked samples (a,b,c etc) for various revisions of a new sensor design, but that's sort of off topic lol

After testing multiple 240hz panels (Not 144hz 1440p I know), I've kinda come to the subjective conclusion that the lower frame time (4.166) throws me off significantly and the polling rate decrease from a general perspective helps put it in line with my older monitor that I'm we can say.. overly attached to haha.

Mind you the latency of a sensor can also be tuned in a way to where the input feel of a monitor can change dramatically outside of polling rate itself.. there's a lot that goes into it as you said!

I'm just going to have bias and blindly guess that the latency variance from monitor to monitor(ignoring sample to sample) is quite big here. my 2c
Top
Post Reply
4 posts • Page 1 of 1