I have the new Razer 8000 Hz prototype gaming mouse on my desk.

CortexFPS wrote: ↑
22 Oct 2020, 14:04
The only drawback is that unfortunately in many games there is difficulty in customization regarding the sensitivity, but everything else is fantastic, you are brilliant boss !!!!

In these cases, or if your mouse driver sadly lack some useful features, you can try this interesting mouse hook tool https://github.com/KovaaK/InterAccel 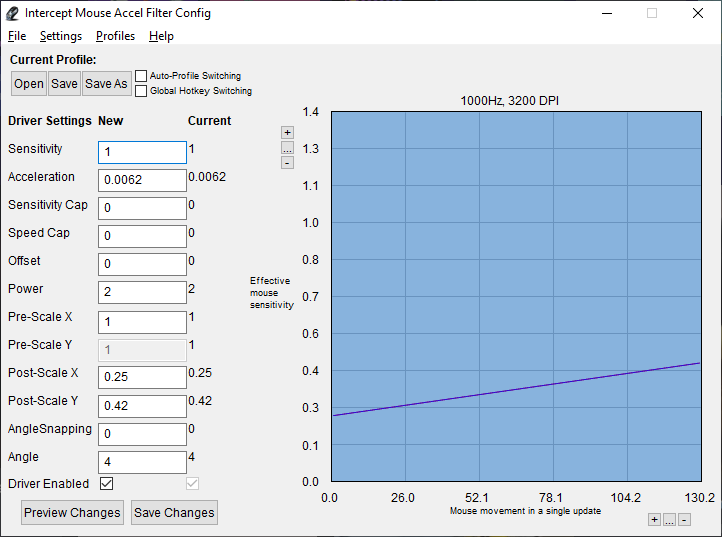 a problem I've noticed previously and again obviously on the zygen 3389 too is that at normal speeds (not too fast so it scatters away the problem, or too slow that you can't inspect the dots....this is talking about areson ofc), the TOP BOTTOM LEFT RIGHT very edges of the circle test circles, they are cut off flat. like noise attenuated or something. why is this a thing? is this a mouse pad problem (pretty sure I noticed this even on hard pad with irregular surface micro texture, but I bet it's gonna be more obvious on cloth where X-Y patterns/weave are a norm) or is this a sensor design problem, and/or is this something that can be fixed/alleviated with higher hz/raw dpi/fps/etc?
Top

surely it's not a hand problem.....is it? I wouldn't think that the hand is least capable of drawing perfect circles at the 369 12 o clock area.
Top

AddictFPS wrote: ↑
23 Oct 2020, 09:20
In these cases, or if your mouse driver sadly lack some useful features, you can try this interesting mouse hook tool https://github.com/KovaaK/InterAccel

In theory something like this can be legally built into a mouse driver such as Razer's or others, like the use of floating a full 12800dpi from the mouse sensor straight to the mouse driver, and the mouse driver outputting dual streams: 1. backwards compatible low-DPI at selected DPI setting; and 2. full DPI precision via new optional High Precision Mouse API that newer games can access.

This is the successor to InterAccel: https://github.com/a1xd/rawaccel.
Maybe create an issue with your ideas, Chief?

Of course, this new API is a must be in all game engines, true raw input. But developers should add mouse settings independent for all spaces where mouse is used, or players will have limitations.

One example of bad mouse implementation, Stalker. Good old FPS games, but... In FPS genre by default both axis have the same sensitivity 1:1, sadly in this case they have set double x sensitivity hardcoded 2:1, can't be changed in settings nor game config files, hardcoded. Inventory use 1:1, is very fustrating. If with Razer driver change axis sensitivity to fix it ingame, inventory is 0.5:1

Seems than Metro games also have this issue.
Top

that's called overall ADS. That's its own category with subsets. you forgot hipfire sensitivity (although I don't even use hipfire ever since influencers promote awareness about the sub 5 frames extra lag of using one button bind (m2) on hipfire(hold)/ads(click) years ago-----and it's down to choosing sniping priority vs a hotheaded rampaging shotty nerd down at pochinki/hacienda)

but then again honestly I don't even get the whole hipfire existence in pcgaming.....like what even does it mean...quake doesn't have it....cs doesn't have it......what makes games like pubg special is exactly ADS, or rather more exactly-- crouch/proning, the map awareness combined with detailed soft/hard cover that validates the existence of an actually believable/immersive/diversive world design/map design cluttered with elements that are both aesthetically pleasing and functionally gameplay alterating... and thus granting the meta strategy beyond wasd/mouse xy..(which exalts the latter....really the 2 aspect are completely none conflicting...)

As for 2:1, it's again the same tired old game tech limit thing (cue Artisan Hayabusa...even today people still sell X favored cloth pad like the TigerEsport Neon because csgo...) By now most people prolly have seen some KOL vids about "so what is this quake/wolfenstein/doom thing in 1990s, what does it look like?", well it looks like a 2d game.....because the tech just wasn't there, and the whole fps spiel, again, tech could't support 3pp modeling let alone ragdoll let alone motion sync. Of course there is that aspect/merit of a "cinematic/traditional" feel, or rather, it's because we human beings can't fly......so intrinsically speaking, we are more or less still attuned to a lifestyle that's largely 2d for thousands of years. But then again and again, this is gaming.....in general gamescapes never should adhere to physical limitations if it wasn't a full blown "realistic" genre-------and EVEN if it is a full blown realistic genre, you can always still make it REALLY IN EXISTENCE but not something people would dare/can afford to DO IRL, yet would aspire to, such as connecting 3km shots that flies in the air for more than half a dozen seconds from the high mountain range with a TAC50 down to the lowlands/plains... Jensen Huang, are you listening? Nvidia Reflex is not so important not in the sense that Valorant matters much.....If you really see into the next decade and cares about huge game vistas, as you claim, then you would know.
Last edited by lyrill on 27 Oct 2020, 12:53, edited 5 times in total.
Top

kurtextrem wrote: ↑
26 Oct 2020, 07:04
This is the successor to InterAccel: https://github.com/a1xd/rawaccel.
Maybe create an issue with your ideas, Chief?

AddictFPS wrote: ↑
23 Oct 2020, 09:20
In these cases, or if your mouse driver sadly lack some useful features, you can try this interesting mouse hook tool https://github.com/KovaaK/InterAccel

excuse my ignorance and if it was already mentioned, but is it posible with any of those drivers to smooth out the mouse movements in any game, regardless if game engine supports smooth mouse movement or not? i mean, to be as smooth and stutterless as when you move player´s view with analog sticks from console gamepads,

i tested those both softwares but didn't seem to find something related to what i ask , im not experienced with those though
Top

3dfan wrote: ↑
27 Oct 2020, 07:29
to be as smooth and stutterless as when you move player´s view with analog sticks from console gamepads.

Seems than these Apps not have mouse smoothing, i never see it in mouse drivers, only in mouse settings in some games, add input lag, because seems double mouse samples artificialy, and interpolate it. So seems much better directly send it more true samples with high end mouse sensor with native dpi (native is not allways the max), and reduce game sensitivity to compensate. Overkill samples should smooth the turn without add lag, at least if game engine can manage high dpi input.
Top

no. wrong. there is not enough native steps + extreme accurate mouse pad--that also is free from dust interference (cross this out if you have a filtered air system/home, as for esport I doubt a bunch of people with outdoor shoes on chewing doritos chucking mountain dew and shouting causing vibration through sound rooms is all that pristine)

you need smoothing. it worked for laser mice, the anti laser/anti smoothing is a circlejerk

and yes many mice have it then and now. endgame gear xm1 has it. (the option)

what is needed at least for now is option to enable it at whatever range you desire. inline with what's said before in this thread. It's not enough to just set to the arbitrary sensor side best, not even combined with game specifics. You need to consider the conditions, as I said, mouse pad...(there is mouse pad calibration since forever as a legacy option for a reason.....)..environment....your skate thickness and hardness........your playstyle independent of whatever game you play, how much you lift, how fast you touch down/slam, how much you tilt your mouse independent of dpi/edpi--and this hooks into your playstyle AND the specific game/mode requirements how much you swipe around, at what absurd(not really) IPS and when that also caps out the mouse hz, how much you fine aim at extremely low IPS and how exactly the mouse hz function at low ips.....how much your hand/wrist/arm touch/grind your pad? how much you sweat? Do you use mouse grips and if so do they absorb some gripping/palm sweat before they drip to the pad? is it more water or more oily, how will it affect your mouse pad's glide AND tracking?

mouse pad is to say the very least a criminally deteriorated and forgotten art. Artisan themselves is unbelievably still content iterating/fine tuning Hayate line (the otsu is said to be updated, not even any public info last I checked) after god knows how many years of no new product (they bothered to release something new with pubg, late 2017 -- the Hayate Kou). And of course the shiden kai after 8 years, no change whatsoever in the surface, nor the mid layer (changing from whatever mid layer before to a hien is NOT a meaningful change lol), nor the backing...... still the same 3 month life expectancy rating like all its other pads---that is for esport players, not your average casul that play 3-4 times less.

You have to worry about many things, starting with hardness/sag/give--------then talking about motion 4-steps: speed of initiation, track/glide, micro adjustments+flickturn adjustments, then halt performance. This is just to explain the generic 4 stages of motion, they are all in unison and conjunction.

And yes, LOD is a huge problem, absurdly omitted by LITERALLY EVERY gamer and reviewer out there, except me(vocal). People are only beggining to realize that changing the LOD alters the DPI completely, not to mention a million other things....most importantly that 0.5mm-2mm lod range is completely unusable, that cloth pads exist because it's got the greatest sales margin WHILE having the most sales number (it last like a year so every year people are back for more vs using a hard pad for years so the brands just die from lack of sales if nothing else) ----- cloth pads have generally higher lod with the same sensor AND/OR sensors lod spec forced to be higher cus they had to cater to cloth pads not having a high SQUAL rating (translate: quality for tracking) regardless of optical/laser tech shenanigans, having a higher lod on a sensor is basically like giving the sensor more tolerance for shitty cloth pads. goes without saying nobody is selling deskmat/3XL+ sized hard pads as dirt cheap as cloth

In the end it's just good business.....but it completely ruins the actual gaming scene. But change is coming. It already came with QCK hard last year and Acari this year. Last year InfinitySpeed already started selling custom sized plastic pads(ResinLegend 1 black). Now it has RL 1PRO with 2 colorways 3 sizes L XL XXL, RL2 with 4 colorways XL XXL, RL3 with S and XL, Nylon Legend(rapid nylon) soft and mid with M XL XXL, also sold a better cheaper gsrse for a while. You all know about skypad XL too. There are sellers selling cheap nylon/cordura pads and that so called hybrid/vulcanized/silicone backing amp500/tigeresport raven(kinwu) pro/dex/hiro/megasoma2 lookalike for less than 10 bucks and size L/XL too. You got fnatic dash that was supposed to be a gamechanger, and the first silicone backing cordura pad, thanks to endgamegear...
Last edited by lyrill on 28 Oct 2020, 14:54, edited 4 times in total.
Top
Post Reply
444 posts