I have applied the Blur Buster application to it, following the same steps I did with the XL2411P (activate the single strobe box once I have the DyAc activated) but it has no effect.
When I check the box, I get a little less brightness and a little less blur but I still see a double image on the whole screen. It's like the crosstalk takes up the entire screen.

I move strobe phase and it seems to move somewhat up and down but it is very subtle.
The application has not given me an incompatibility error.
It seems that the monitor is not capable of single strobe at 60 hz

Please help. If so I will have to return it

Thanks a lot
a greeting
Top

Can you please open the Factory Menu and take a photo of it.
Does it say "60 Hz Single Strobe" anywhere in that Factory Menu?
Head of Blur Busters - BlurBusters.com | TestUFO.com | Follow @BlurBusters on Twitter

How do I enter the service menu ?
Top

How do I enter the service menu ?

I can't get into the Factory menu even though I try button combinations.
The XL2411K has only 4 buttons instead of 5. It looks like a different setup.

There is no other website where I can find how to enter?
I've been googling but can't find anything from the XL2411K

There is no other website where I can find how to enter?
I've been googling but can't find anything from the XL2411K

I think I now have to reach out to BenQ ZOWIE to ask. While waiting for me, try experimenting.
Head of Blur Busters - BlurBusters.com | TestUFO.com | Follow @BlurBusters on Twitter

Ok. Thank you very much, Chief

You are very kind

First of all I want to apologize for asking you so many questions, and of course, thank you for how kind you are and how generous you are for dedicating your time to me.
I would love to be able to reciprocate

. I am a personal trainer, if you need anything related to sports or training I am at your entire disposal

Well, I wanted to show you some photos I have taken and tell you what I'm going to do to see what you think.

I bought the XL24111P recently, thanks to your advice in the forum, and I have to say that I am very happy. I think it's the closest I've ever seen to a CRT (you know I want it for 60hz consoles).
So seeing as the XL2411K had just come out, I thought I could improve on the XL2411P by being a more modern monitor.
But from the tests I've done it seems as if the "K" doesn't play the strobe as well as the "P" does. Not only at 60 hz, but even at 120 hz the "K" continues to have a double image even in the area that is NOT the crosstalk area.

The "P" in the area that does NOT belong to the crostalk area is almost perfect, as you can see in the photos.

So, I have the impression that even if we manage to enter the factory menu of "K", we will not be able to surpass the "P", don't you think?

So if I want to get the "K" money back, I have to return it soon and I can't wait long for us to get into the factory menu.

While those monitors come out I will stay with the XL2411P which seems to be the one that behaves best with consoles, right?

When one of the new ones comes out and you try it yourself and tell me:
"Angel, this monitor is fantastic," then I'll buy it.
I trust your criteria a lot

, you are the master

I would like to know what you think of everything I have told you.
Your opinion is important to me 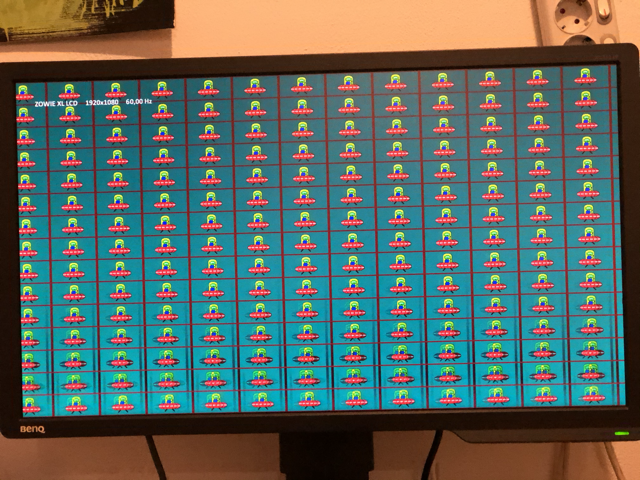 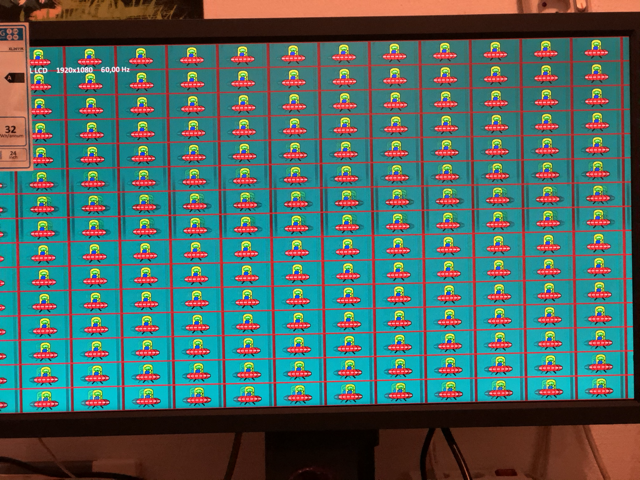 It seems like the XL2411K may have a major bug in this respect; how many % of screen height does the strobe phase change?
Try editing the BlurBustersStrobeUtility.ini to extend the DDC integer range from 0 to 255 instead of 0 to 100. See if that extends strobe phase range.

Also hit the "F" key in Strobe Utility to force selecting Profile A and B, and see if it changes anything.

Depending on our discoveries I may have to forward this information to BenQ.

The XL2411P is likely a superior choice to XL2411K
Head of Blur Busters - BlurBusters.com | TestUFO.com | Follow @BlurBusters on Twitter

It seems like the XL2411K may have a major bug in this respect; how many % of screen height does the strobe phase change?
Try editing the BlurBustersStrobeUtility.ini to extend the DDC integer range from 0 to 255 instead of 0 to 100. See if that extends strobe phase range.

Also hit the "F" key in Strobe Utility to force selecting Profile A and B, and see if it changes anything.

Depending on our discoveries I may have to forward this information to BenQ.

That's right, I provided the 2 settings (A and B), I also provided the XL2411 option, and the option to press the "F" in the utility.
Even all the DyAc and AMA options.
in fact I came to think that there was something that I was not doing well and that it was my fault.

So it seems what you say, there is some kind of bug or something similar.

If we take into account that to play on the console competitively, you have to eliminate 2 defects: blur and input lag.

The only options right now for consoles are the Benq monitors that can strobe at 60hz and the LG OLED CX.
But the LG achieves great clarity but at the cost of adding input lag (I tried it at a friend's house and it was impossible to play at a competitive level).

So we have the option Benq monitors.

The XL2411P does a fantastic job of combating both of the aforementioned flaws.

The blur eliminates it at 99%. The area that is NOT the crosstalk area, the vast majority of the screen, is amazing as it looks, it is almost a CRT.
And also the crosstalk bar is movable, with which you can put it where it least bothers you.

And input lag is not a problem for this monitor either. Its base input lag is 10 ms. The strobe will add something to it, but we well know the input lag in this case is not a number but a latency gradient.
Well, I've put the crosstalk bar right at the bottom of the screen, so 65-70% of the top of the screen is free of crosstalk and blur. According to the gradient latency if the lag just at the top of the crosstalk bar is 0 ms, the lag in the center of the screen will be about 4 or 6 ms higher. So we would be talking about 14-16 ms (we would still be below the input lag frame).

And I can assure you that I am sick with lag. Well, I play fighting games, FPS and shump. And I get to play with this monitor enjoying every fight and every game

So right now the XL2411P is the best option for those who want maximum CRT clarity coupled with a very low input to play competitively.

We are all waiting to see the new monitors that will come next year that will also be able to do strobe at 60 hz.
But in the meantime, we have the XL2411P.

I won't get tired of thanking the Chief

.
This is all thanks to you