All Unidentified Forum Objects go in this area! Any fun alien talk goes in this U.F.O. Abduction Lounge, even topics other than monitors or computers. Introduce yourself!
Forum rules
Post Reply
56 posts

Now that this is an OffTopic Lounge, I'll happily answer OffTopicly for this specific situation. (I might split the thread, if excellent tangents of discussion merits)


mello wrote: ↑
10 Jun 2020, 14:16
The only thing that matters is the existence of data and/or scientific evidence in a support of an argument that has been made.

Data is important -- and we want more parties to do more tests.

Being Blur Busters is 50% media site and 50% display laboratory -- oftentimes, users ask us to "review a display" -- but Blur Busters don't directly mass-test monitors ourselves except for Special Editions like GSYNC 101. The important thing is users of our Blur Busters inventions -- enabling many to do tests. We don't want to compete against the users of Blur Busters inventions -- whether be TestUFO or pursuit camera or other method. I do appreciate it when users do properly use our tests though, rather than to spin an argument (e.g. incorrectly executed test procedures).

Blur Busters often plays the role of education and the tools for testing display temporals, as well as advice. The old proverb applies ("You give a poor man a fish and you feed him for a day. You teach him to fish and you give him an occupation that will feed him for a lifetime.") applies here --

In the ideal situation, the student, thus, is the best teacher for oneself -- thanks to things like TestUFO. It can't easily be done for everything (e.g. It's hard to demo benefits of 1000Hz in a TestUFO test onto a user's 60Hz display), but it certainly has played a big role in moving the art of display temporals forward, such as answering "Humans can't see 30fps vs 60fps" in a link.


mello wrote: ↑
10 Jun 2020, 14:16
The only legit authority is the one with the data and science on its side, any other authority, and especially the one that screams: "trust me, i'm an expert" should not to be trusted blindly.

Sometimes the best teacher is the student!

(I mean this in the context of teaching oneself, not teaching others)

That's why I created TestUFO as a microphone dropping factory -- a "see-for-yourself" linkable motion animation. A self-answering demo in a single click! Blur Busters doubles as a school of display temporals.

Someone dares ask a question that can be answered by a see-for-yourself motion test, I create or modify a custom test. They can answer the question themselves by clicking the link, laying many debates to rest by seeing it for themselves.

Once, someone in some forum somewhere, asked me if black frame insertion needs to be black. I simply answered with TestUFO Blue Frame Insertion. (The existing BFI test with a custom background) -- the frame just have to be blank, not necessarily black-colored, although black is superior because it doesn't distort colors.

Another person in a forum claimed that CRT 30fps at 60Hz cannot be emulated using black frame insertion on a sample-and-hold LCD. I corrected this person with a see-for-yourself link: TestUFO Emulation of Strobed Double Images Via Software BFI on Sample-And-Hold. Best seen on a 120Hz+ LCD, since it requires 4 sample-and-hold refresh cycles to correctly emulate, so it'll flicker badly at 15fps on a 60Hz LCD. An even-more-accurate emulation for a 240Hz non-strobed LCD can be viewed here: TestUFO Variable-Persistence Double-Images on 240Hz Sample-and-Hold (will flicker badly on 60Hz LCDs).

There are actually millions of different TestUFO tests when considering all the configurable parameters, including undocumented parameters. I've been micdropping "Humans Can't See 30fps vs 60fps" since 1993. 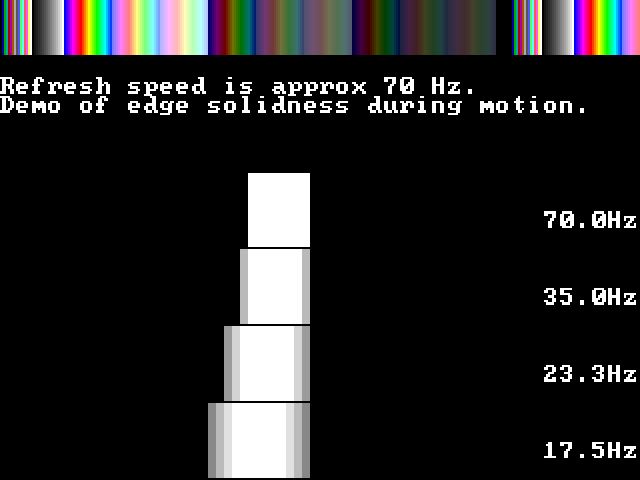 Today, millions of people now visit TestUFO with eight figures of pageviews annually. The legacy of TestUFO continues in raising the general aggregate Internt IQ about display temporal behaviours -- even to descendant display-temporals arguments such as known benefits of display technology of the future (1000Hz displays, frame rate amplification, etc.).

You rarely see those "Humans can't see 30fps vs 60fps" arguments anymore. Even in the dying days of that myth of a statement -- such commentators were quickly silenced by a brief reply of a TestUFO link by more knowledgeable users. Whether on Reddit or YouTube comments or other places.


mello wrote: ↑
10 Jun 2020, 14:16
"Unthinking respect for authority is the greatest enemy of truth." - Albert Einstein
"Science is the belief in the ignorance of experts." - Richard Feynman

Anyway, rest of your post is spot-on! You always write very reasoned replies and I appreciate it.
Head of Blur Busters - BlurBusters.com | TestUFO.com | Follow @BlurBusters on Twitter

Talking from personal experience. Professional gamers are nothing special, they are all normal people who specialize at something specific and they have achieved elite level in comparison to other humans at doing this particular thing. This is no different from any other specialization that every human has. I have known many pros over the years, and i agree 100% that an appeal to authority argument is meaningless here. What pros do, how they do things, why they do things, what hardware and setting they use or what they recommend is irrelevant. No one should be taking an advice regarding windows / game settings, hardware advice from professional gamers, because almost none of them specialize in this area. Almost all of them either use personal preferences, try to copy each other or they have read some articles / watch some videos and then they try to pass that "knowledge" from an authorative perspective. There are very few pros who are actually a generally smart and knowledable people in different areas and outside of their gaming & skillset specialty. And thats just the truth and it applies to all other areas of life too.

I don't think that is true. I think this is all about motivation and about goals and achievements, exactly the same as with any other sport. Once you are not fully committed, you lose a step, and because of that your performance suffers. Not because you are getting older.


schizobeyondpills wrote: ↑
09 Jun 2020, 14:24
5. if those pros you praise so much were given a free tuning/tweaking/oc'ing service on their own setup, their performance would improve 10-20% AT LEAST

Let's not get ahead of ourselves here. I have been gaming since internet-cafes era, and what you said here is a completely nonsensical argument. Tuning/tweaking/oc'ing is literally nothing compared to the actual skill that the player poses, and elite players will deliver high performance even on a bad / slow setup ups. The next big thing is internet connection performance. You can have best hardware in the world with the best tuning/tweaking/oc'ing, but it will all mean nothing if you are being crippled and bottlenecked by a poor internet connection. After both of these factors there is a big gap... ... ... and then, there are slight hardware & tuning/tweaking/oc'ing benefits which are mostly situation / game specific.


schizobeyondpills wrote: ↑
09 Jun 2020, 14:24
7. we are as real as it gets, since we dont operate on perceived imaginary authority like you, but rather on raw measured data from tools as well as evidence from documentation which clearly shows how, where and why 7 beats 10.
anything else?

And still, Win7/Win10 debate is IMO completely irrelevant compared to the actual skill of the player (1st biggest factor) and the actual internet connection performance (2nd biggest factor). On LAN they all use the same system anyway, and when gaming via internet, OS / hardware / tuning/tweaking/oc'ing plays very little role when it comes to delivering high level gaming performance (results wise).

while i do 100% agree that internet network performance plays a huge (absolutely critical) role in online play i think you are downplaying the importance of hardware a little bit too much; my first competative game years ago was rocket league absolutely loved it played it non stop hours upon hours and didnt progress that much i could barely hit gold(a very average and even arguably below average rank) i was playing on my samsung 4k tv and discovered gaming mode which allowed my rank to skyrocket went from barely able to hit gold to hitting platinum like it was nothing and progressed exponentially rank wise i was intrigued and wanted to know more about this "game mode" feature i looked into it, and instantly became obsessed with input lag saved up some money and bought a 144 hz monitor also instantly ranked up from low plat to mid champ the 2nd highest rank in the game these are huge jumps that just wouldnt have been possible without my initial discovery no matter how good my skill is my original tv gaming mode off has about 180 ms of input lag and you just cant play at a high skill level with that kind of delay
Top 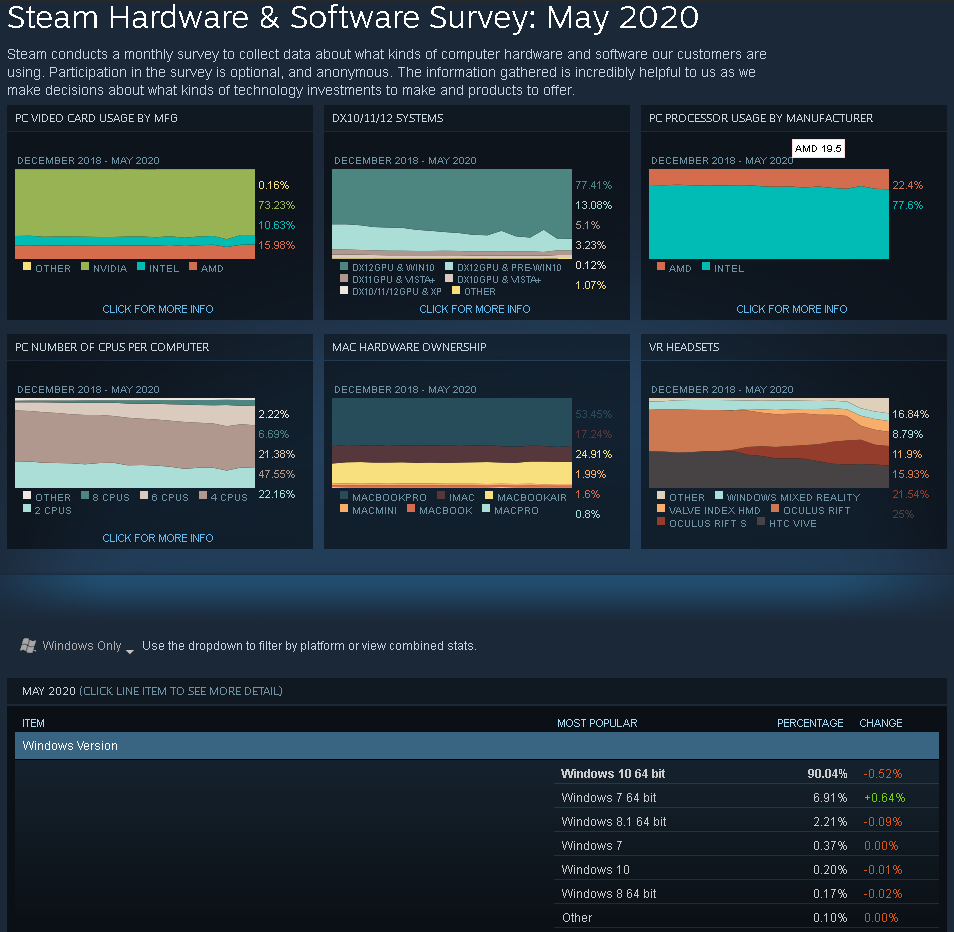 Windows 7 of course, unfortunately. Unless you clean ur windows 10, but still win7 has better mouse latency/responsible etc
Top

IDK why everyone like W7...
w10 is much better (for my opinion)
Except the Administrator accsess in w10, that is hell...
Top

Windows 10 would be my choice for gaming.