Thanks --
Just for readers, curious about related Blur Busters media articles, they are here:

*NOTE: For discussions about crowdfund risks, reply instead in the comments section of this article.
Head of Blur Busters - BlurBusters.com | TestUFO.com | Follow @BlurBusters on Twitter

Strobing helped with 650 cd/m2 = short MPRT settings 50% less dimmed that current ~400, 3D LUT in firmware, sRGB mapped to DCI-P3, DP daisy chain, 2x DP v1.4, 2x HDMI v2.1, etc... Eve specs are a dream, but they lack the most important feature one gaming monitor can have to assure the best motion smoothness experience with strobing, Blur Busters approved. I doubt Eve team have the same experience on this matter.

QHD 240Hz for good quality strobe up to 120Hz, like Viewsonic XG270, but with +50% brightness and improved pixel size. UHD 144Hz maybe can be tuned to do a great job in the 60-80Hz single strobe range, 60FPS locked games with motion blur reduction and UHD sharpness, sound good ! Hope Eve unlock single strobe at all fixed frequencies the monitor can work, tune good strobing, and not forget OSD strobe settings for custom, because some players prioritize low crosstalk center screen (image quality), but others input lag (competitive). And take care with bezels to avoid backlight bleeding, the weak point of IPS.

Unfortunately not FALD, and not FHD 360Hz, but anyway is a very good start from a specs/price point of view of this new brand. Hope are robust monitors, with good quality electronics components. Very interested in these monitors, waiting reviews and first buyers opinions !
Top

I'm a little skeptical about the time frame this launches (end of this year), no big monitors makers have made any announcements about HDMI 2.1 support and it's currently only appearing in higher end TV's.

Obviously a chipset with HDMI 2.1 support is required, maybe there is one in development by some SoC vendor and they are hoping it is ready in time, I doubt Eve themselves have built such a SoC.
Top

To be honest, I share your skepticism.
This whole new "company" and monitor doesn't instill much trust in me.
I bet this is going to be another case of overpromise, underdeliver.

Take a look at all the text on their website...
the terminology they use, the incorrect grammar and spelling.
Not to mention the pointless quotes from "reputable" websites, just to try and make themselves seem more credible.
Plus my only experience with LG's panels in the high refresh rate realm (27GK750F-B) wasn't a good one...

Just take a look at this facebook ad which popped up in my feed: 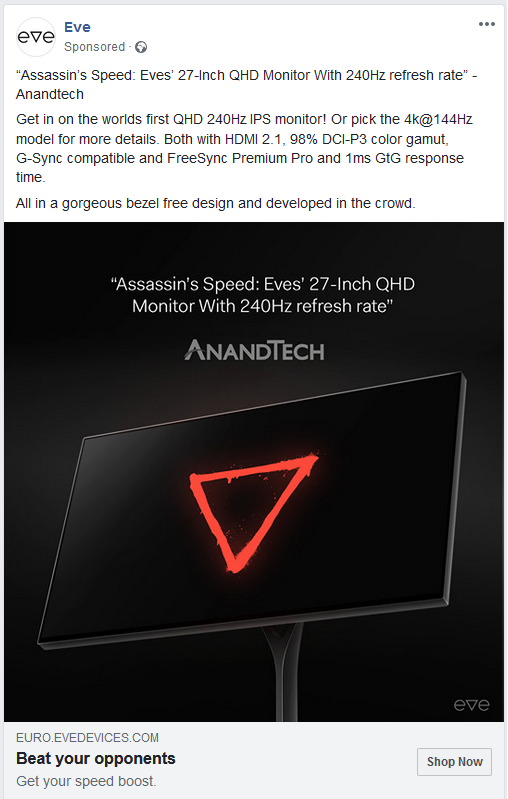 They quote AnandTech with no purpose at all, other than to have a reason to put their name on the picture and website...
since all they said are basic facts about the upcoming product, no evaluation whatsoever.
(As there cannot even be one yet, since all of this is just wishes and promises at this point in time.)

Subdued looks, OEM-esque build.
Mediocre OSD, full of copied features from BenQ's, just renamed and slightly worse.
(Or even not working correctly in some cases... e.g. AW2518Hf and it's 3 step Black EQ, which also adds a horrible oversharpening filter.)
Fast response times with minimal amount overshoot on paper... but ingame motion will look less clear than on my current (then old) BenQ XL2540 monitor.
Middle of the road input lag times, which are as good as a decent 144hz monitor's from a few years ago... even though this will be new and 240hz.
Nowhere near as good and fast of a scaler, as the Realtek ones in post-XL2735 BenQ monitors.
Some of the fancy ports and connections not working as intended on launch, only to be fixed via firmware many months later... with early buyers struggling to RMA their monitors. (Bad customer service.)

I know I sound like a BenQ fanboy... I'm not.
I wanted to hate them for their jacked-up prices and whatever, but then I went and tried high refresh rate monitors from Acer, LG, Dell (Alienware) and lastly, BenQ and the fact of the matter is, that I always had the best overall experience with theirs.

My Acer 240hz monitor had unfixable frasmeskipping, motion looked horribly smeary on the LG, and the Dell AW2518H felt less responsive and looked more washed-out than both my XL2740 and 2540.
The AW2518Hf was then one 240hz monitor which came close to the 2540... it was just as responsive, but as I've said, one of the main features was both lacking (only 3 steps) and broken.
Plus it also cut out occasionally... black and white dots (like on an old TV with no signal) showed up on the screen in random patterns on both of the units I bought.

And this is all just the tip of the iceberg.
Every other high refresh rate monitor's OSD which I've tried, looked like it was trying to rip off BenQ's features, just with weirder and tackier names, and less nuance.
And with all of them, including very highly regarded monitors like the XB271HU, I had the feeling that the people tuning the monitors never played any games competetively.
What I mean by that is stuff like not knowing how to make the right compromise with overdrive for example.
If you're trying to achieve faster response times and more motion clarity on a monitor that is going to be using the same panel as competing brands' monitors, you'll have to crank the overdrive on yours.
However, how you make it look will determine how distracting it will be!
I always preferred the "BenQ OD look", which is: Bright, almost fully white trailing, with a hint of light-blue.
...As opposed to the "Gsync OD look": Dark blue, ink coloured trailing.
The reason for my prefernce being that the darker trailing, while looking better for casual gaming and being less distracting, further obscures the stuff on your screen which is in motion (and is already smeary because of that), while the brighter trails help to somewhat clear-up the blurrines of rapidly changing parts of he image.

I can actually compare both on my XL2540, since when I switch to G-sync compatibility mode on it, the look of the overdrive trailing changes from what I prefer, to what I do not.

Keep an eye on https://eve.community/

There's some community-driven design though, so hopefully it becomes somewhat less generic:
https://eve.community/t/spectrum-update ... on/20845/1

I've been occasionally posting in the eve.community forums to recommend changes to make it a bit less generic, such as:
https://eve.community/t/spectrum-update ... n/20845/91

They are now going to add 128-level overdrive adjustment (yay) thanks to my suggestion. So instead of 2 or 3 Overdrive settings, it'll be a full, complete OVERDRIVE SLIDER! No Factory menu, the complete Overdrive Gain access is in the user menu! It's now confirmed, thanks to me, here in this page under "User Defined" overdrive. I might try to suggest the User Defined Overdrive Lookup Table system, because I would like to see 1 manufacturer implement this. That might be too advanced stuff though. But thankfully the User Defined overdrive is going to be there.

You're welcome, courtesy Blur Busters public suggestion to Eve in their forums.

I've also communicated the potential of Strobe Utility style flexibility, still communicating about this, keep tuned. Their chinese vendor still don't understand what I am trying to say to them, but I'm trying. I want the strobe phase/length flexibility at least via DDC command. But they also now confirmed support for adjustable strobe length in menus, thanks to my repeated whining.

You're welcome, courtesy Blur Busters public suggestion to Eve in their forums.

Crowdfunded hardware entails risk, so informing them of free Blur Busters knowledge to minimize odds of underdeliver is always a good idea. With successful and failed kickstarter type products littering the way, I have still been a fan of multiple different crowdfunded projects but cognizant of the risks as you say. Nontheless, I'm actually involved in the Eve monitor community as I'm a fan of giving feedback (whether public or private, beta or production, paid or unpaid) with full Blur Busters passion.

Mind you. Risks. You can lose money in a crowdfund if a crowdfund initiative is less than successful. I know the risk. But if they deliver, at least the odds are now a smidge smaller that they will underdeliver, and odds are better there will be some small surprises. Those are nervous can simply wait.

Yes, I posted in their forums to tell them about needing 60Hz single-strobe for emulator users. None of the "min 75Hz strobe" that manufacturers seem to be stuck on. I'd guesstimate 50-50 odds of 60Hz singlestrobe. So if Eve supports 60Hz single-strobe, you're welcome. (Yoohoo Falkentyne.)

Yes, I posted in their forums to tell them about the KSF phosphor (slow phosphor), fortunately early enough before they selected their backlight LED manufacturer. I'd say 50-50 chance we'll not have a "slow KSF phosphor" situation, but we shall see.

Be mindful about preordering mind you. This is a kickstarter style crowdfund. You CAN lose all your money. So if you don't like those scenarios, then wait. On the other hand if you want to back it (without expecting a monitor and being pleasantly surprised), then by all means. If you do back, and are unhappy, remember I already posted this disclaimer. That said, they are using LG's panels so it's a good panel, at least the panels exist and are real. That said, I'm trying to make sure they're a little bit less likely to screw up on features -- it is indeed less likely to be boilerplate now, thanks to my suggestions.

As typical for all crowdfunds, add fluff to time estimates and it's totally possible competitors may announce and to hit the market before Eve does. The occasional crowdfund does shock/surprise, and arrive on time. Or they all arrive late (competitors and Eve arrive late).

But thanks to the headstart they had in willingly reading public Blur Busters suggestions, I would speculate the competitors might not have the BlurBusters-suggested features (unless they hire Blur Busters Approved services).

The hope is that (whenever it ships, early, late or otherwise) it hopefully be more amazing thanks to my replies made at https://eve.community
Head of Blur Busters - BlurBusters.com | TestUFO.com | Follow @BlurBusters on Twitter

Yes, advising them at an arm's length role to give commentary -- they've been asking lots of questions and at least wanting to learn how to strobe better. Happy to answer questions. Certainly, I hope they can deliver.
Head of Blur Busters - BlurBusters.com | TestUFO.com | Follow @BlurBusters on Twitter