I'm picking up a pair of 2080 Tis the second they are available.

These cards are super exciting to me because I'm doing ray tracing research and making my own indie games using RTX.

Check out these pics of Battlefield V with RTX reflections activated:

Finally, my GTX 970 can relax a bit in my wife's computer. Although we'll still use it to play some co-op VR games on over the network, once I get a second VR headset.

I'm all about the VR now, and using 2080 Tis in SLI should double the performance of ray-tracing games due to the ridiculously parallel nature of RT and DX12 implicit and explicit multi-GPU support for such things. I wrote the SLI code for GTA V and it was unfortunately limited to AFR (a royal pain to code for, trust me) so NVidia opening up stereo-VR SLI, in the driver, in an opaque way to the developer (one GPU per eye), should help adoption. And explicit SFR (split-frame-rendering) will be tremendous too, it can allow load-balancing between heterogeneous GPUs, even using your on-board GPU to give you a 10% FPS boost perhaps by doing the postprocessing on it or just a sliver of each frame's rendering.

One thing I noticed in the Quadro RTX reveal at Siggraph was that the new SLI bridge connector, NVLink, actually doubles the VRAM when you use two GPUs, so you're not simply "wasting" money where buying the 11gb vs 8gb cards is concerned. This to me is HUGE.

That should mean, theoretically, that an SLI-ed 2080 Ti will have a total of 22 gb of usable memory (by both cards), instead of 11 gb, and the 2070/2080s will have 16gb instead of 8. Which are both massive upgrades and makes SLI way more appealing. Not only would you get double the rasterization / ray tracing performance, but also double the framebuffer too.

I tried to confirm whether this is true for the consumer RTX cards, but haven't been able to yet, so take this with a grain of salt. It would be an NVidia thing to do to only allow shared framebuffers on the Quadro cards for movie shading only, which really need the extra RAM in their 48 gb + 48gb SLI high-end Quadro setups to fit all the triangles of those scenes in.

The big deal about RTX isn't just that it's six times faster in ray tracing per se than Pascal, it's that it does it via DXR (and eventually Vulkan) extensions to DX12, in a standardized way, which will boost adoption. And going further, for global illumination which is the real holy grail of computer graphics, the only way to do that in real time on these cards (or anything, really, except maybe a supercomputer cluster), is by doing 1 sample per pixel path tracing (1 spp) and then AI denoising on top. That is the thing that truly opens up these cards to eventually get to do real-time, noise-free GI, probably using a hybrid rasterization + ray tracing approach, at least initially. But there are plenty of new rendering algorithms that completely eschewing rasterization will open up too, like native foveated rendering, frequency-based rendering (putting more GPU power where it counts in the image, in higher-frequency areas such as edges or more specular areas). With reflections, you might need a hundred samples to capture the actual behaviour of light in radiometrically complex scenes with caustics for example. At some point then you need to implement things like photon mapping which apparently can be used to render 1080p 60 fps already. It's all very exciting stuff and I look forward to the revolution.

I really hope AMD's next cards will implement DXR in some way, if they don't I think they are done for, on PC at least, quite honestly. And I say this as a fan of AMD, I bought a new Threadripper 2 workstation and would much prefer having Freesync than being stuck with G-sync for my workstation monitor, to save cash. Competition is good but I am worried that RTX will be a knockout blow.
Top

By the way, it's not just ray tracing performance that's gotten a huge boost, rasterization is also increased by a big factor too: 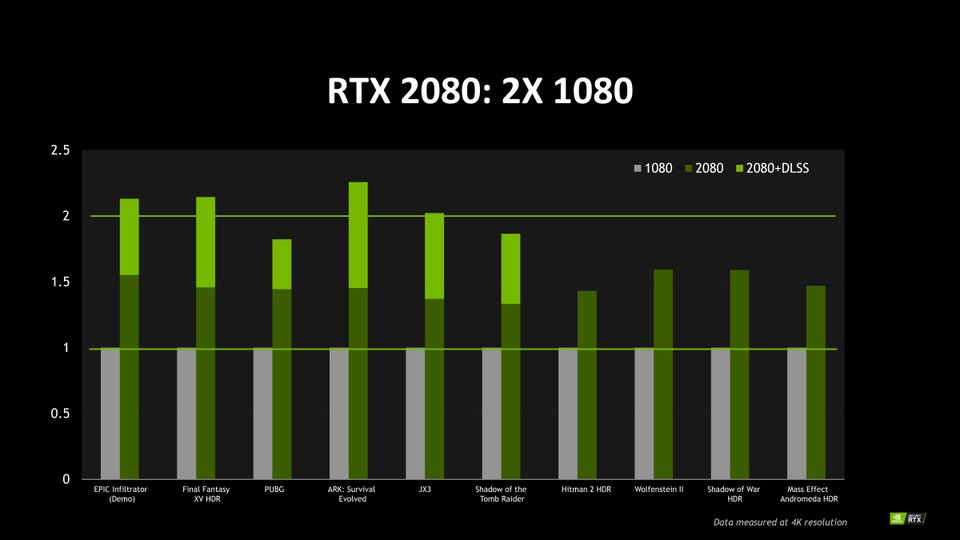 Gamers strongly disagree ray tracing is a strong blow against competition. If the Tomb Raider demo is actually indicative of performance and ray tracing with a 2080 ti would at best be possible at 1080 and 60hz then many of us couldn't care less for it in this generation of cards. Pretty pathetic marketing by Nvidia. Of the many who reportedly still play on 1080 60hz monitors, how many do you think will be picking up a 2080 ti and putting it inside a higher quality build? It's just nonsense. Throw in the people with 1080 144hz monitors too. I doubt you find a lot of interest in the 2080 ti there, and ray tracing on a 2070 seems ludicrous. At minimum you're talking about people with 1440 144/165hz monitors. 60 fps may be tolerable for more picturesque games that probably won't be first person shooters either, but going down to 1080 probably isn't.

That graph is what recent sources have been pointing to and where the real value of these cards will lie. Fortunately BlurZapper seems to be incorrect on how low the performance increase is. These cards may on average be 40% faster, for DLSS I need to see actual fps to compare against standard performance (6x the ray tracing performance is so far a big joke- I'm disgusted by Nvidia's marketing) and I need to see the effect on the picture. It's basically that 40% figure over Pascal why I'm probably buying a 2080 ti. I'll be targeting the Asus Strix in particular, which strangely seems to be held back, although it seems like the "higher end" models or versions seem to be held back in general so far.

By the way, don't you love it how some companies get away with horrible marketing, clearly misleading? It's like they're shameless.
Top

I agree that any time you have a high end graphics option it won't be used as much in competitive FPS shooters, but many people, especially those with variable refresh rates, would prefer half the framerate but more than twice the image quality and realism, which is exactly what ray tracing offers.

There are also tangible gameplay benefits to GI, such as being able to deduce enemy movements from around the corner which rasterization is oblivious to (even in shadows). To do proper shadows and reflections, you need a full-scene 3D representation of all objects and ray tracing via BVH is what makes it possible. It's a literal game changer.
Top

BattleAxeVR wrote:There are also tangible gameplay benefits to GI, such as being able to deduce enemy movements from around the corner which rasterization is oblivious to (even in shadows). To do proper shadows and reflections, you need a full-scene 3D representation of all objects and ray tracing via BVH is what makes it possible. It's a literal game changer.

We can already see shadows from players who aren't visible, but are hiding behind something

https://youtu.be/DUJ3_NhqUb4?t=70
Steam • GitHub • Stack Overflow • Twitter
The views and opinions expressed in my posts are my own and do not necessarily reflect the official policy or position of Blur Busters.
Top

BattleAxeVR wrote:I agree that any time you have a high end graphics option it won't be used as much in competitive FPS shooters, but many people, especially those with variable refresh rates, would prefer half the framerate but more than twice the image quality and realism, which is exactly what ray tracing offers.

I'm not disputing this, at least with a little more qualification than that bold statement. What I'm arguing is that going down to 1080 from 4k or 1440 places the bar for much better picture quality inconceivably high. I'm even granting solid 60 fps, not the likely noticeable 30-55 fps fluctuations of that demo even with gsync. This is not about competitive FPS shooters. Doesn't seem to make sense in any context. Not to mention what a joke lumping the 2080 and 2070 with the 2080 ti that struggles so much with ray tracing and making ray tracing the focus of your marketing for these cards is.

Should I be prepared to be blown away when I play on my pg27uq at 1920x1080 with ray tracing? I would've accepted fps of around 60 at 4k with ray tracing, but holy crap what a demand to spend so much money for 1920x1080, and the Tomb Raider demo may be about as much to expect too! Where are the people blown away by how it looked? Would love to see a side by side comparison.
Top

What the framerate/resolution people always seem to forget is the other side of graphics: the AESTHETICS. Thank god for artists who are continually pushing the boundaries as far as possible each generation. It's completely possible to have a 1080ti graphics card frying scene with 1080p if I wanted, it's just that because of the limitation of the market (that is CONSOLES, not PC hardware), it makes no sense to do this.

Anyway, has anyone else noticed the complete lack of HDMI 2.1 with these cards? Can this be updated in later with a driver update or something (kinda like the Xbox One X)? Or do you think Nvidia will give up the 48Gbps connection just because it also requires support for VRR?
Top

What do consoles have to do with any of this?
Top

I am just pointing out that for most developers, consoles is a huge market that they will mostly design their game around. And for a modern game with demanding aesthetics (IE, high production value), it is the reason they can even exist in the first place.
Top
Post Reply
77 posts