CPU is delidded and custom watercooled, at 5000mhz 1,36v i never get over 63-65C at gaming even in hottest summer days.
CPU frequency, if you lock it at 5000, would not be temperatures-dependant.
One my past teammate had 7700K not delidded at 5ghz with AVX offset and AVX disabled in windows, with air cooling. So its all about controlling your own hardware and forcing it to work in mode you want it to.
Top

Looking at the 9th gen product stack Im actually really impressed with the 9700k. Intel is making me take back my statement that clock per dollar is not increasing. I guess with all the focus on the 9900k I completely overlooked it. For most games its right on par with the 9900k and in some that handle hyperthreading poorly it comes out a couple percent ahead. This is a good move by intel hitting the value market hard with a top end offering. Nice to intel making some wanted changes. Stepping away from thermal paste and offering more value options is a nice start. As well their product stack doesnt look like its charging such a permium for things like overclocking support that would have been nearly free for intel to offer on all cpus. Even the i5 looks to be a nice upgrade for people owning older i7s.

As for overwatch I can tell you that it is possible to have hitch free gameplay with my 6th gen i7 locked at 3.1ghz (cache 3.5) and mobile 1070 (120 watt tdp instead of 150). I hit around 200fps average in fights and never go below 160 or so. This is with reduce buffering on. I used to get hitches but something stopped them; either an update, or me disabling many windows features and background crap. Possibly internet connection could play a role as well. Keep working at it because with your setup you should be able to run constant 300 if you want.
Top

What are you looking at? I just went over several of the reviews and they dissuaded me from spending $900 to upgrade to a 9900k. The cooling change appears to have been done as a necessity- this CPU appears to run very hot anyway. I need a source for the 9700k doing something impressive, which saves you just around $100.

Short of delidding my 7700k it appears there's little I can do.
Top

This is in respect to gaming loads. The i7 usually out performs the i5 but that is typically not due to hyperthreading. For those with i7 or other hyperthreading processors, turning off ht often nets a gain in gaming performance. Hyperthreading requires that threads share the resources of the core and 2 threads cannot allways be run simultaneously. Games are rarely optimized for something like hyperthreading. Since the 9700k has 8 cores just without hyperthreading it often falls within 3% of the 9900k for gaming. Sometimes it is above the 9900k despite having less cache resources.

This is a discalimer that this article is done poorly and many games show a tie between MANY processors because the testers completely failed to make the game cpu bound or did something stupid like test fps in civ 6 instead of using the cpu benchmark to test the between turn performance. HOWEVER some results are able to be cpu bound and all of the gaming tests that show a difference between processors show the 9700k tied with the 9900k. Sometimes above it slightly. Look at these results with gta v https://www.anandtech.com/show/13400/in ... -review/16

If you are doing something outside gaming I would say that the 9900k would be a good option. But with gaming it looks like its so close to the 9700k that there is no reason. The only thing i would like to see tested is the 9900k with hyperthreading off vs the 9700k because it may actually pull ahead in that case. But I doubt any good reviewer is going to test that.
Last edited by open on 21 Oct 2018, 11:51, edited 1 time in total.
Top

I got a 9700k with an Asus Hero XI motherboard as the thinking is the 9700k should be as good for gaming and it's actually available but it seems questionable. There are already games that use more than 8 cores/threads, and new games will be more likely to do so as well. Temps are another factor but there is disagreement over how hot the 9900k runs at too.
Top

If you have a 7700k at 5GHz, there's a solid chance a 9700k or 9900k would actually be a downgrade for you in some games, particularly if you use higher resolution (e.g. 2k). Many people are bitching about their 9700k or 9900ks being unable to hit 5GHz. Mine can at reasonable voltage, but I now undervolt and run it at 4.9. I have a full water loop, but I get no performance gains out of 5 or 5.1GHz and my room gets warmer since that heat has to go somewhere.

If current me could have glared at couple months ago me, I'd sooner have jumped from a 1080 Ti to a 2080 Ti for far more performance gains at about the same overall price (after selling my current GPU). And that's a pretty foolish jump as well, just less stupid than spending so much on a new CPU for 5% gains.
Top

Well, it's kind of common wisdom that at 1440p and 4K, you go for the faster GPU, not the faster CPU

Anyway, at least it's future-proof for upcoming games that will most probably be CPU-hogs.
Steam • GitHub • Stack Overflow • Twitter
The views and opinions expressed in my posts are my own and do not necessarily reflect the official policy or position of Blur Busters.
Top

I've done quite a bit of testing with my 9900k and gotten quite a bit of results. You "can" hit 5gz on air or AIO but it will run hot. here are some pretty pictures I've made up for a video 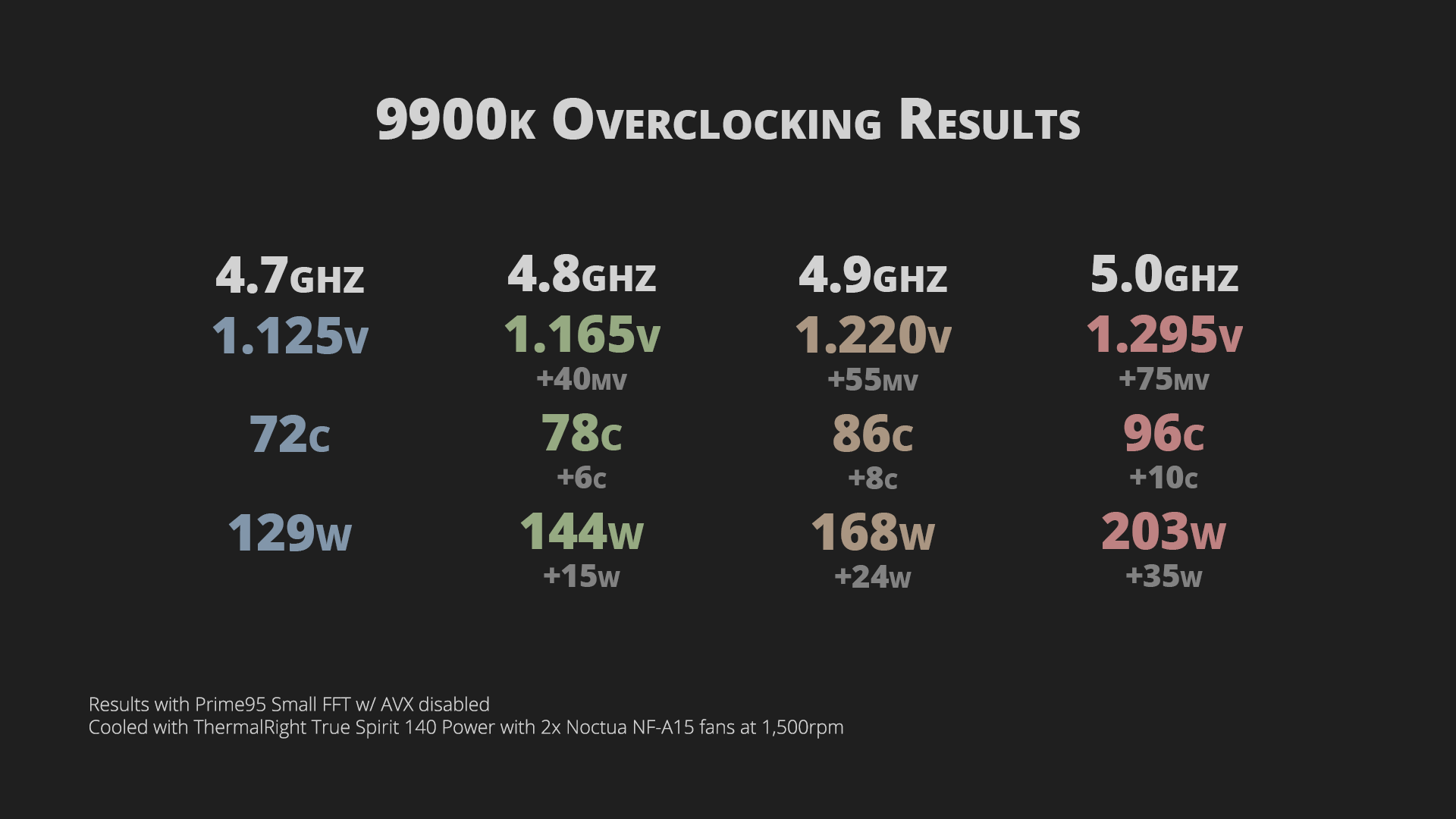 This is with a very good air cooler running max RPM, AIOs 280mm/360mm AIOs do run 5c~ cooler and take longer to heat up but i really don't think they are sufficient at running a 5ghz 9900k for extended Blender/Video rendering workload, under gaming it will be good enough.

Cooling is a big thing to consider with the 9900k, 9700k "should" be just as good in most games and is much easier to cool. But tbh a lot of games don't even use 8cores yet

9900k is overpriced and can give you less performance than 9700k because of the Hyper Threading. Something that happens, for example, in BF V according to Guru3d and Black Ops 4. Games do not like hyper threading, unless you only have 4 cores, in that case HT will help.
Top

9900k is overpriced and can give you less performance than 9700k because of the Hyper Threading. Something that happens, for example, in BF V according to Guru3d and Black Ops 4. Games do not like hyper threading, unless you only have 4 cores, in that case HT will help.