This sure takes some time. Maybe he's waiting for his second XB273X before reviewing VG259QM?

Odyssey G7 just aperead in my country, it's even pretty reasonably priced which i didn't expect. So many choices so little money... T.T
Top

RLCScontender wrote: ↑
06 Jul 2020, 16:44
Good thing about this website is that the UFO testes generally don't lie. As long as saturation, temperature, and certain levels of brightness and a straight line, that's great way to tell how fast your monitor is. 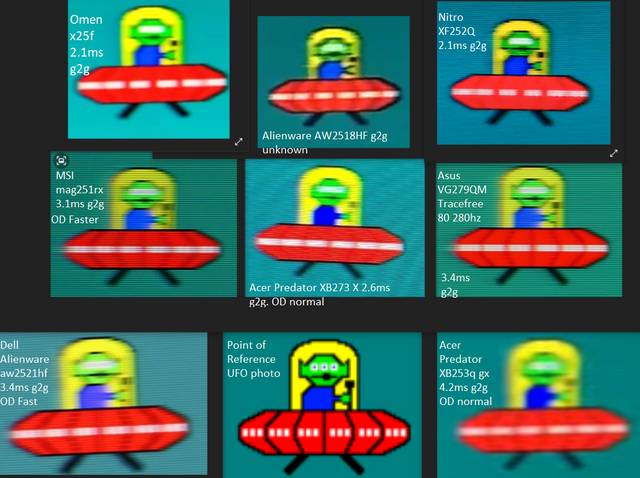 Hey RLCScontender, so is the Acer Predator XB273X still the thing and the king?

It finally came to Poland, I ordered one already. From what I've seen here, XB273X has extremely good GtG response times, averaging at 2.6 ms, as seen on your picture, and little to none input lag, assuming from your previous posts, as well as well calibrated G-SYNC module. So, is this the best 240 Hz IPS monitor in terms of input lag, response times and motion clarity? Predator XB273X will also be cool for console gaming due to very low input lag, right?

I am only interested in monitors with G-SYNC module, not just G-SYNC Compatible, so I gave up on ASUS TUF VG279QM, especially because of its insane input lag at 60 Hz.

I been using XB273 X with g sync module for 3 weeks now and its hands down best monitor i ever used. input lag feels incredible and the ease of use of having the same perfect overdrive performance across all frame rates because of G sync is just heavenly when playing a lot of different games
Top 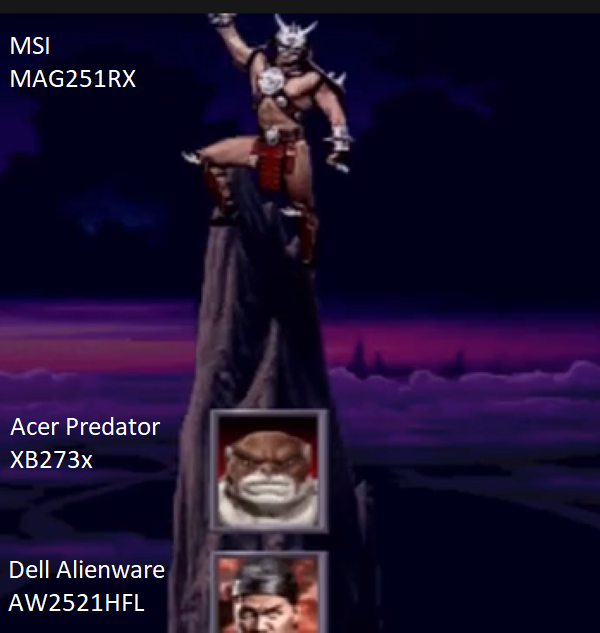 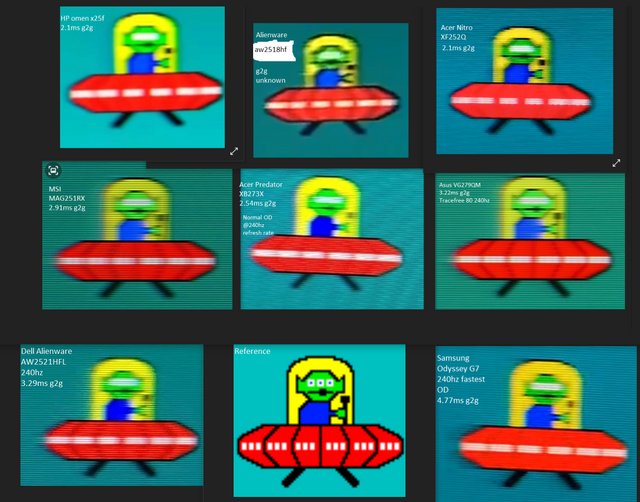 I've ran over a hundred rise/fall times on my oscilloscope and did a crapload of UFO ghosting tests. All confirming one thing, it's simply NOT fast enough to keep up with the 4.17ms required response time for 240hz.

Here's the Samsung Odyssey g7 vs my gatekeeper monitor alienware aw2521HFL. (another thing, the input lag of the alienware SMOKES the odyssey, it's not even close. I felt like playing underwater when i played rocket league) I will provide a review coming up explaining this. 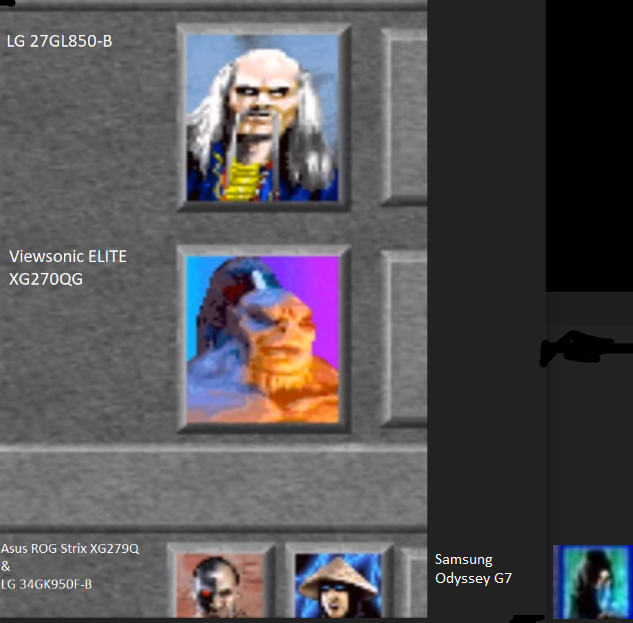 But first, let me explain myself on the level of accuracy of my reviews. In my honest opinion, my pixel response time and input lag measurements are so accurate that i'm putting a plus/minus 0.2ms margin of error.

UFO tests don't lie. , that is the absolute way to determine response times relative to other monitors. Mark's invention in my opinion has proven my initial assertions wrong(since i'm a major skeptic ). So i went on ahead to see if the UFO ghosting tests are valid, so i followed the 960 pixel 2 second rule and used it on my cannonball test in rocket league. Every thing that i saw on the UFO tests 100% CONFIRMS what i saw on those cannonball tests.it's so accurate that it's able to sniff out those hidden artifacts(the red monster hiding behind the backlight strobed nano viewsonic monitor)


0. Viewsonic elite xg270qg's ULMB red phosphor (almost blinded me, a seizure waiting to happen)
1. Black level smearing (makes EVERYTHING blurry especially if you move your camera, also HUGE black motion artifacts if you look closely enough)
2. Inverse ghosting (extremely distracting, yes, even the faint coronas are distracting)
3. Motion blur reduction crosstalk (it's annoying because you may react to the dbl image instead of the actual moving object)
4. ghosting (I find this least annoying because ghosting generally blends in anyway and it's tolerable since there aren't any annoying bright flashes such as coronas from overshoot transitions)

BFI off overshoot or smearing photos

WHERE MPRT fights with overshoot tracefree 100 on vg259qm giving a huge advantage in rocket league or sniping on FPS.(0.4ms g2g)

i find it extremely unfair to exclude the slow black transitions from 0-255-0 from the odyssey G7. if i remove the black transitions from the alienware fast ips for example, then it would have response times faster than the fastest TN(xf252q/omenx25/omenx25f/aw2518h). I have to make this FAIR and i yes, BLACK is a shade of grey. 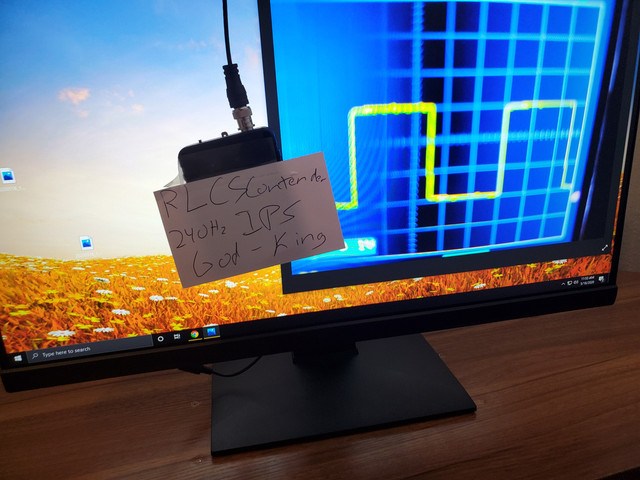 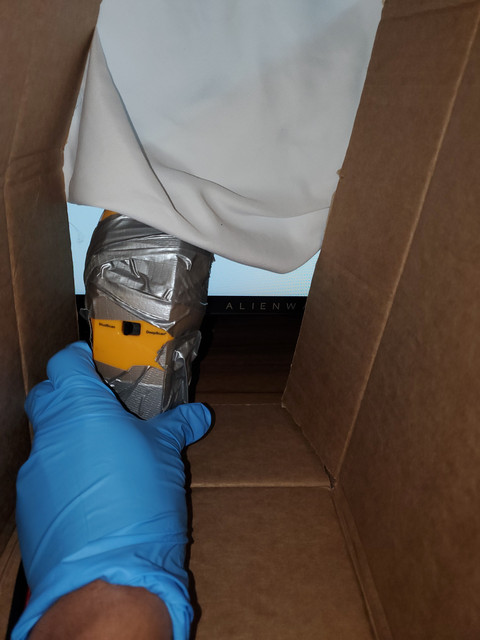 RLCScontender wrote: ↑
06 Jul 2020, 16:44
Good thing about this website is that the UFO testes generally don't lie. As long as saturation, temperature, and certain levels of brightness and a straight line, that's great way to tell how fast your monitor is.

Hey RLCScontender, so is the Acer Predator XB273X still the thing and the king?

It finally came to Poland, I ordered one already. From what I've seen here, XB273X has extremely good GtG response times, averaging at 2.6 ms, as seen on your picture, and little to none input lag, assuming from your previous posts, as well as well calibrated G-SYNC module. So, is this the best 240 Hz IPS monitor in terms of input lag, response times and motion clarity? Predator XB273X will also be cool for console gaming due to very low input lag, right?

I am only interested in monitors with G-SYNC module, not just G-SYNC Compatible, so I gave up on ASUS TUF VG279QM, especially because of its insane input lag at 60 Hz.

hardware unboxed claims 2.8ms g2g for the samsung odyssey g7. I measured it and it' 4.77ms g2g, even slower than the Nano IPS monitors.

Remember, this is NATIVE G-Sync where the scaler is tuned by nvidia to make sure the performance accross the refresh rate range is optimal with as little inverse ghosting as possible.

the predator x25 360hz monitor is just a 240hz monitor overclockable top 360hz, the chances of it being FASTER at 240-hz against the predator xb273x is extremely slim because the AUO fast IPS AHVA 27" monitors have a much better headroom when it comes to actual response times.

oh and here's an updated UFO 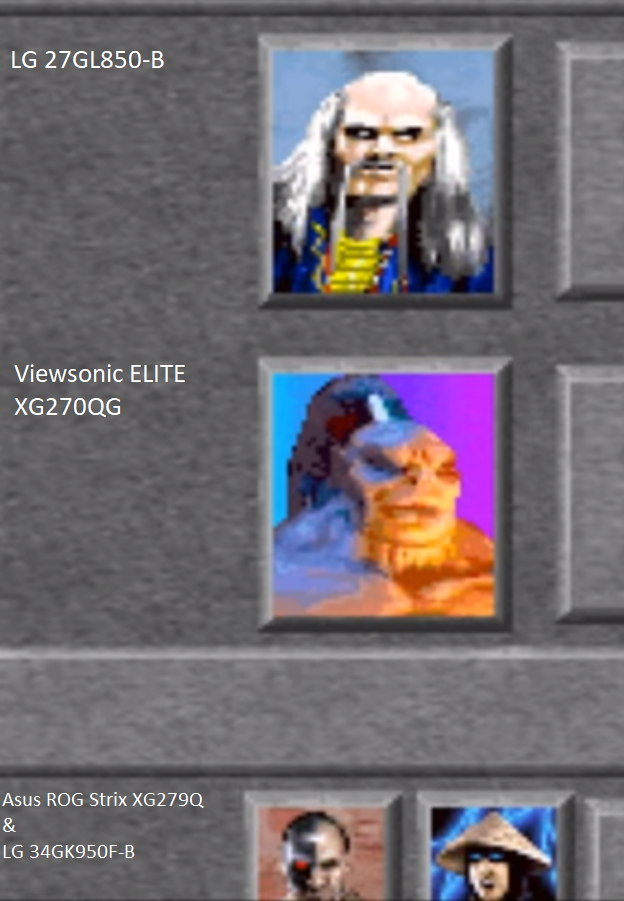 unfortunately, i have the MSI MAG251RX as being better than the acer predator xb273 x. Although the response times and input lag are better on the predator xb273x, its really not by much. If you factor in 240hz backlight strobing, the msi 251rx is clearer than the 240hz acer predator. Also it will have zero latency option in the upcoming update. The colors and contrast ratios are better for the msi.

RLCS, how does motion performance of XB273 compare to previous generation TN G-Sync? I am returning an Omen X 27 because my Omen 27 165Hz native G-Sync display simply has better pixel responsiveness. The Omen X 27 feels closer to previous gen IPS native G-Sync panels in most transitions (except no obvious light on dark smearing like those IPS displays).
Top

Guys, i dont want to come over as a lazy bastid but here it is:
I have a ViewSonic XG2402 now and i am bout to upgrade to a 24.5 panel that has lowest input lag possible. Whats the lowest input lag 24.5 monitor now out there? I had my eye on the VG259QM. but isnt the IPS interfering with the inputlag? Is the BenQ Zowie XL2546S better? I really dont care about colors or graphics. all i care about is response time and low inputlag.
Top

After reading all the pages in this thread i still cant decide what to buy.

-First of all.. im a CS:GO and DOTA2 player and always play at Competitive/Ranked and i hope my next monitor i choose is Better than my previous monitor 144hz BENQ ZOWIE XL2411P in terms of Response Time, Motion Blur & Input Lag.

-I do care about Color and i SHOCK seeing the stat and review from all of you guys has done, that nowadays IPS panel can smash TN panel in speed and etc. it’s all excellent DEALBREAKING for me and cancelling my next Purchase the ZOWIE XL2546 (non S) since the XL2746S is only 15% faster than (non S)! but is that all IPS panel Response Time, Motion Blur & Input Lag WORSE or LOWER than BENQ ZOWIE XL2546/XL25-2746S ? If yes i won’t buy it..

-Since the ACER XB273X not/didnt release at my Country yet, What about AORUS KD25F? Wdyt? I see it on many reviewer said that its new 240hz TN PANEL, 0.5ms Response Time with GOOD Color Accuracy. And still doesnt answer my doubt Who is better if compared to MAG251RX or XL2546 since no forum Really talk about it. For info: In my Country KD25F price exactly same with MAG251RX at 464$ and XL2546 (non S) cost 514$

-Most of all CS:GO Pro Player playing at low Resolution like 1280x960 or 1024x768 and i want Play like Them, it will be a problem for all the Monitor i mentioned? Or maybe that just make the Monitor Easier to Load/Better in all Response time, Motion Blur & Input Lag?

-I still confuse choosing between those 3 monitor cause i never see head to head Thread or Expert Discussion like you guys doing about. Appriciate it!

Please help, anything u guys say will be precious to me! Thanks!

@daviddave, the xl2746s gave me really awful eye strain which resulted in extreme burning in the eyes with LONG use throughout the day. It was unbearable and I returned it. Tried to push it further back did not help, changed brightness.. lowered blue light,na..nothing helped so I gave it up. Dyac was nice but imo not worth that eye burn, your rubbing your eyes after a while that burn sucked.
Top

vids, the AORUS KD25F has relatively high input lag vs other options I would avoid. Also the other issue with that panel is for the motion blur feature brightness is way too low.
Top

I can see pretty much of inverse ghosting in brighter transitions (fade, pale halos) on Normal overdrive, to the level that it makes it distracting in CS:GO. In Blur Busters UFO test I can clearly see inverse ghosting (pale halos) as well, best visible in brighter transitions. It also has big backlight bleed, especially in bottom left corner, and HORRIBLE colour shift/uneven backlight from the left side of the screen, all the way vertically, from top to bottom, a few centimetres to the right, so everything on some portion of the left side of the screen appears bluish/darker... That's the worst colour defect on a monitor I have ever seen. What's more, a little bit of top right corner of the XB273 X appears grayish/dim. My previous display, Acer Predator XB271HU, also had much of a problem with uniformity, some areas of that monitor were warmer, orangish. I actually got three replacements of XB271HU, and returned them all because of terrible panel uniformity and ghosting (on Normal overdrive, bluish halos). I'm starting to think that Acer just sucks.
Owned and tested displays: ASUS TUF VG259QM (280 Hz) • ASUS TUF VG279QM (280 Hz) • BenQ Zowie XL2546 (240 Hz) • MSI Optix MAG251RX (240 Hz) • Acer Predator XB273 X (240 Hz) • Acer Predator XB271HU (165 Hz)
Top
Post Reply
952 posts