We have many here wishing to remain anonymous. Some using official organization or business or esports or youtuber confirmed emails so real people do exist too amongst the mysterious people.

Anyway back to Hertz candy and delicious tech.

Why do you value motion clarity over input lag? It sounds like you are mainly looking for the panel with the best possible motion clarity which I see as just a bonus for competitive gaming in my opinion compared to input lag which I feel like will be more advantageous over other players of the same skill.
Top


i'm sooo swamped with my schedule so don't think i'm ditching this site. I've h bad so many other projects that it's really tough to do everything at once. I was also hired to Crush AMD's 5950x and 5900x cpu. I'm not a professional OCer, i'm an actual PE so we know exactly how to overclock. Pro OCer rely on hardware, whereas as a PE we already know the EXACT amounts of voltages and efficiency since i have the proper PE tools(oscilloscope) to measure voltages. 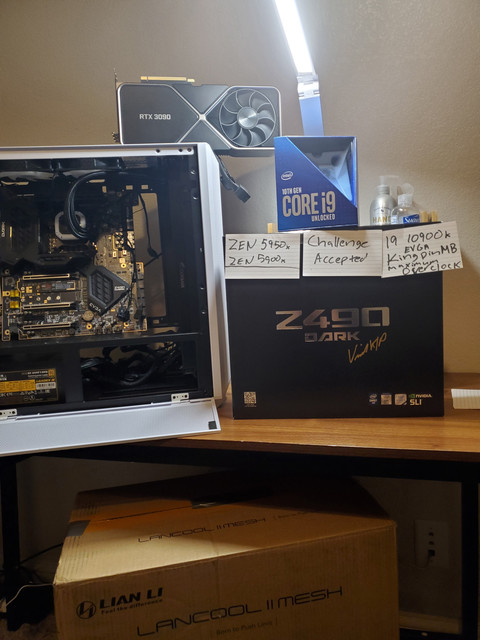 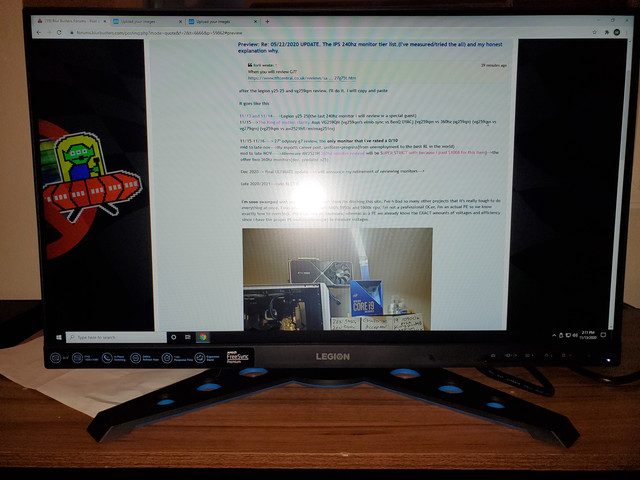 u might want to use a better aio and lm(arctic liquid freezer 2 360mm). as a rank one world low latency pc architect i highly recommend it. if you need help with components my dms are open. one time exception to help you with getting most out of your intel cpu due to desire to have someone make a good "push it to the limit" comparison of new amd cpus vs intel.

and no im not sharing my hardware, its trade secrets only for frens of the void.

My first impressions of the Lenovo Legion y25-25 wasn't too favorable (excuse me for my speech impediment, I have a slight lisp). I've held out on doing video reviews because of my lisp insecurities. I am however a visual learner and i believe it's simply best to show it, than write about it.

DISCLAIMER (i'm a CONSUMER first REVIEWER second. I'm fairly blunt; however, i'm honest as well. I'm probably no different from anybody else talking about the monitor that they own. The difference between a consumer and a reviewer is that they have to uphold some sort of cordiality, professionalism, and neutrality. With me? Nope, i keep every thing BLUNT and honest coming from the point of view of a consumer who has every intended REASON to kept his monitor. (only difference is, i've bought all the other monitors, so unles this monitor adds something that the monitors don't, then i have to be critical about it).

i can care less about my reputation here or anybody else. I'm not here to get a FOLLOWING. I say whatever i have to say as an honest consumer. Majority of the monitors that i've purchased and reviewed are well praised on amazon and other websites. So if i'm getting those kind of praises from the actal company that sells them, I can care less what anybody here thinks. That is why people find my material to be dvisive. In my opinion, i don't think i'm divisive at all because the people that generally object to my content are people who are defending their purchase(which comes from a biased background) or do not like my blunt personality when i carry myself in these forums. As long as i'm getting praise from my fellow consumers, i can care less what anybody thinks. At the end of the day, i am doing this for the best interest of the consumers. because ultimately, the CONSUMERS are the ones affected. oh and i BUY these monitors with my OWN money. That is HUGE because ultimately, my money gets affected whereas a professional reviewer, the company sends a monitor to them for free so a pro reviewer is NOT reviewing something they actually own. Me? Every monitor that i've ever purchased will always get a chance to be kept by me. I don't discriminate but if i Don't like somethinga bout it, i will call it out) 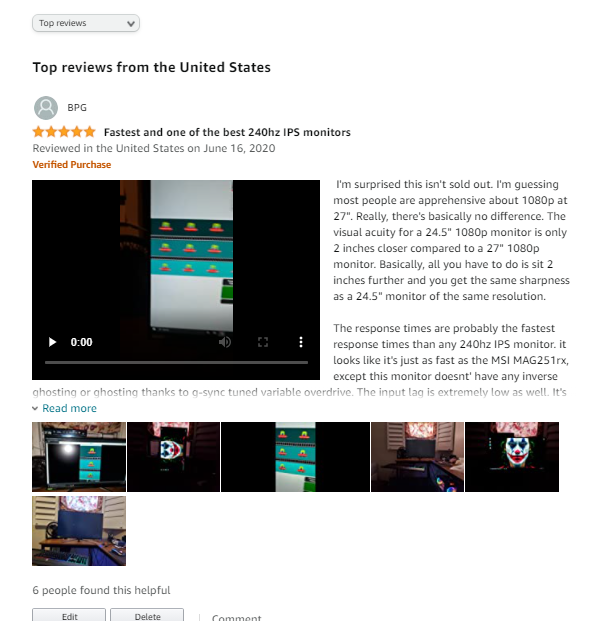 pick a number 1 through 2

Will wrap up the review later. Spoilers,

Performance in the context of COMPETITIVE GAMING

In practice tests and results(RL) and pictures and examples

If this all ends up being true, it would be very fascinating to see how you managed to pull off doing low-latency and monitor hunts/reviews along with testing and still balance a practice schedule and more to compete at the highest level (and win!)

In my ~4 year or so career of playing games "professionally" I have come to realize there are pretty much always only two realities;

1. The person ends up becoming terrible or consumed in removing lag and restrictions that they forget the entire reason as to why they even started the journey to begin with - being good at games and performing at a high level. They usually end up becoming worse, bitter or many other insert X emotional response to not being able to compete at a high level anymore due to lack of actually playing the game itself or completely messing up their competitive mentality in the process.

2. They are still good, but they end up so consumed in the work that they simply either quit, or get put into a position where they quit and go take up a job within the related industry to fix lag. Seth Schneider from NVIDIA (The product manager of reflex) could be considered a competitive player as he's reached stuff like Global Elite in CSGO (I understand global elite is not considered special by many within CSGO scene) but being top 1% should in all honesty qualify for a high-level understanding and need.

I'm pretty much always battling the constant feeling of;

This cycle is very problematic overall to the actual requirements of a high-level athlete, as the absolute most preferred state is the one where they can be "one with the game" and feel sliiiightly challenged, but not too much. Yet all those 3 feelings completely prevent that. It's a tough battle and I would imagine there should never exist a single pro in the world at a top, top level that is able to do lag research, while competing and being able to be the best. Maybe it's possible for solo games, i.e fighting games or quake players. But I'd imagine the moment you add a team into the dynamic, they're also very problematic to your own schedule and dive into latency as team games usually require even more practice.

I'm simply saying all of this, because it would be nice to hear that a player is able to play rocket league, an enormous game that is also team based at a high level while doing the things you've been doing. I'm somewhat in the same boat myself, but I can clearly tell had I just practiced the game more, I would of performed better. But I would of never reached the true satisfaction of knowing I am able to play at my best - which is the reason why I compete in the first place

Though, I will say, even though there is "lag" and it's clearly present. Ever since October after a 4 year long search, I stopped lagging "completely." Yes there is still lag obviously, but it's to the point where the threshold is so low that I am able to completely focus on the game in majority of interactions rather than feel non-engaged or immersed due to inputs that I know for a fact was performed consistently and/or "correctly" but still ended up sluggish/feeling wrong.

It is definitely due to the user schizobeyondpills constantly attacking me telling me to fix my memory latency by getting better low latency RAM / CPU Overclock. And shockingly, that was the missing piece. Not the 240hz, not peripherals, not mental game, not anything else (although they helped a ton!) the only thing able to shake it all off and make things "acceptable/comprimisable" was when I swapped out my 2133mhz cl15 ram for 3200 cl14 (and total mem lat became 35-36ns in a program such as IMLC and 38ns in AIDA64 from 51ns and 56ns before cpu overclock)
Although I do not condone close to anything of what schizo does or his methods, I still give credit where credit is due. (I also recently just placed 7th out of ~6000 competitors, marking my highest online event placing this - and last year ever since the ram change in October as I... managed to finally just play the game for once instead of constantly having this lag "excuse" in the back of my head

Anyways - back on topic! It would be nice to see what you will post for us, I think a lot of your monitor reviews have been very useful, so either way, if its not real. It doesn't matter to me, from my history with pro players across almost every genre, I'd actually prefer you not to be a pro as I've learned pros are the most clueless people on this topic outside of subjective feeling. (Though, at the same time, certain pros can be the most useful as well lol - just as a majority they are not, even if they are more useful than the average gamer of course. That has to do with specificity!)

Lastly, even though my lag journey is somewhat over as it's more important for me to focus on becoming better as a player and getting that thrill of the competition again now that things are better and more acceptable, it doesn't prevent me from purchasing that juicy 360hz. It seems like it's going to end up being a PG259QNR or Acer Predator X25, as Europe/Scandinavia currently only have the Acer Predator X25 available if not for the pg259qn (but no reflex!) the PG259QNR went on listing recently, so I assume it's on the come up. I also saw some rumors about AW2521H coming out in November 26th for europe/scandinavia. All that remains is the MSI one at that point.
Top

I'm finding stock of the 25" Asus to be impossible to find in my region but the Alienware is easy.

Are these IPS monitors really close to the BenQ XL2456K in input lag, motion clarity and pixel response?
Top

Are these IPS monitors really close to the BenQ XL2456K in input lag, motion clarity and pixel response?

Just recently received my Alienware AW2521HF and am very pleased with it. I was coming from a Ben Q Zowie 144hz and the difference in input lag alone is crazy. At some point I will likely do some more valuable testing myself, but currently, yeah really liking it.
Top
Locked
1120 posts