Many sites including LinusTechTips, RTINGS, TomsHardware, and others use the free Blur Busters pursuit camera invention. Now also avaialble as a rail-less smartphone wave, too!
Post Reply
6 posts • Page 1 of 1

Just testing the Acer XF272 X (the XG270 arrives next week) and wondering if my video is helpful to determine if this looks decent or not at 240Hz.
Thanks!

TN is still better than IPS if you want 240Hz strobing.
It looks average-to-decent for TN 240Hz strobe -- But how does it look with 120Hz?

P.S. For video pursuits, make sure to use a longer camera exposure per frame (increase camera ISO, or adjust exposure setting). However, this is an OK first non-reviewer/non-youtuber attempt, just a matter of adjusting camera settings. I prefer to see 2 or more tickmarks in the sync track per freezeframe.

That was using EXTREME Overdrive and Extreme VRB as to my eyes, that actually was giving me the best results.
Anyway you want me to test at 120Hz, or should I try different combinations?
Top

Re: Is this performance decent? [DIY Pursuit Camera Test of Acer XF272X]

Your new pursuit camera attempts are good -- especially a few frames in the second video have very good freezeframes -- that said, it looks even better when
1. I load the YouTube fullscreen
2. Then switch YouTube quality to 1080p 60fps, and play through twice,
3. Then slide the slider and press pause when close to best freeze frame
4. Then use the period/comma "," and "." keys to single-frame step backwards and forwards
5. Then screenshot the sharpest ladder frame (fewest sync track distortions).
And voila, the 120Hz and the 240Hz ones. 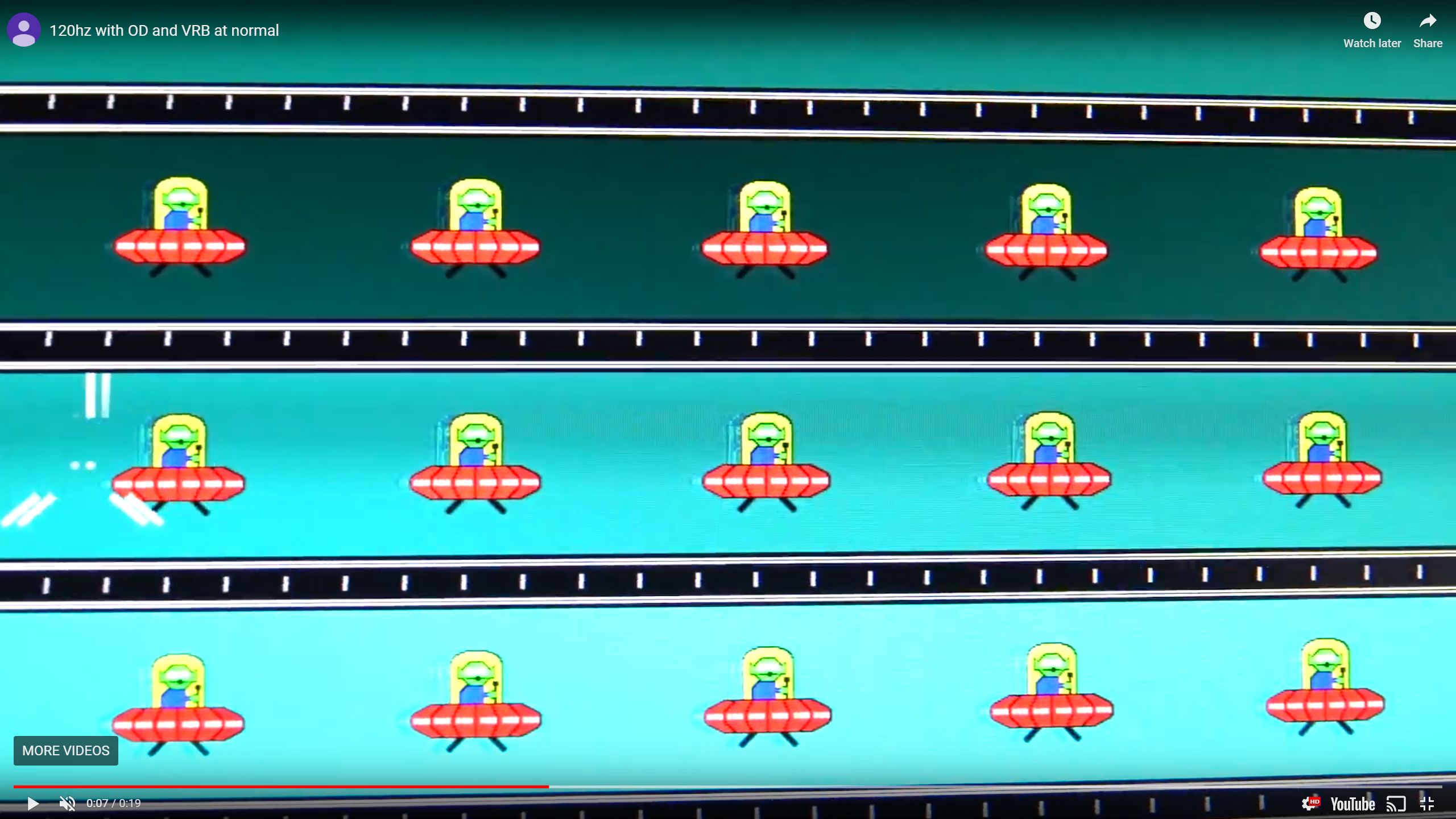 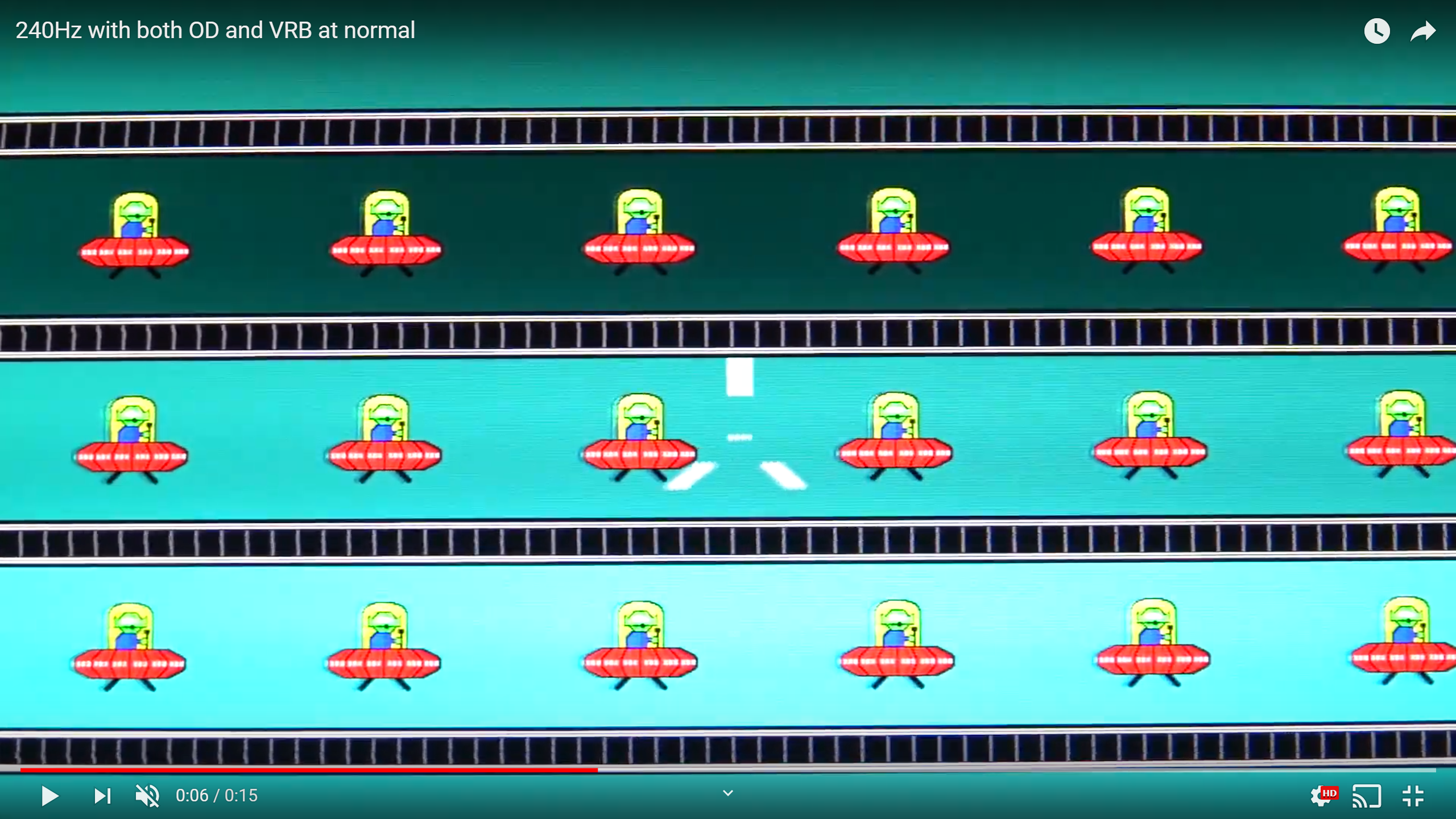 (Ignoring the screen reflection in the middle, you did a great job of video pursuit on this one, this time around!)

Still a smidge overexposed (alien eyes are washed out, yellow dome is whitish-yellow), so you may need to decrease the camera ISO without changing exposure length, and/or reduce the brightness of the monitor. Maybe slightly adjust focus a bit better (Fixed focus), but it's sometimes hard to get good focus for a hand-wave without a rail.

But this one is a MUCH better pursuit camera attempt -- good job.

Now cropping a zoomed portion of your best freezeframe, 120Hz vs 240Hz:

(That's a very great second-attempt job for a rail-less hand-wave smartphone pursuit -- even despite compression artifact -- slight overexposure -- and slight unfocus -- and the viewing-angle-issue amplification caused by smartphone closer to screen than human eyes -- which caused the middle and bottom bars to gain the same cyan tint. Despite these minor flaws, I'm able to now able to 'confidently' analyze these photos since it more accurately captured strobe crosstalk).

Note: No need to re-attempt these particulars but to give helpful pursuit camera tips -- for future monitors or future hobby pursuit camera, try testing a pre-focus to fixed focus, also try further away (phone lens same distance as regular eye viewing distance) and instead zooming in to prevent viewing-angle amplification artifact (but that can kill smartphone camera resolution, so tradeoff, if no optical zoom), slightly lower ISO number to darken the photo or dim monitor brightness, and if phone allows, use the highest possible bitrate to minimize compression artifacts. Also, if your video app is limiting, try a different app -- though sometimes some adjustments are impossible on some models of smartphones, unfortunately.

That said, where XG270 will shine, is strobing at 120Hz (make sure to install Viewsonic Elite Display Controller in order to automatically receive the newly-released firmware upgrade for brighter strobing -- then you have multiple PureXP brightness options). So make sure you test PureXP at its recommended refresh rates (even though it's not strobe-Hz locked like some strobe brands such as ULMB).
Head of Blur Busters - BlurBusters.com | TestUFO.com | Follow @BlurBusters on Twitter

Re: Is this performance decent? [DIY Pursuit Camera Test of Acer XF272X]

Thanks for the kind words and the analysis. Yeah I kind of noticed that no matter what combination of OD and VRB I tried, I couldn't make 120 or 144 look as good as 240 (at least to my eyes). So basically I am looking into a better 120Hz performance of the IPS with much better colors, vs a better 240Hz on this monitor with oh boy..that IQ is kind of an eye sore...even my wife commented on it as she is used to my PD3200u lol

One question, I recall you saying that higher DPI with lower sens is better when using Gsync. That only applies to using Gsync and not if I am just running OD and VRB at 240Hz (limited in game for CSGO)?

Thanks again for your great work on this page and help with my test.
Top
Post Reply
6 posts • Page 1 of 1