no pros use DyAc+ [at least in CS:GO, even though #1 pro in Rainbow Six uses DyAc]

That said, I want to offer two additional options for reducing strobe lag even further:

drmcninja wrote: ↑
29 Mar 2021, 17:26
V-Sync On and fps locked to less than refresh rate was also nice but added input lag. FastSync offset some of this because the mouse felt better with high framerate at least.

RTSS Scanline Sync + strobing tends to be marriage made in heaven.

No capping needed, since even 0.1 or 0.01-fps-below can generate latency sawtoothing from fps-vs-Hz slewing beat frequency effect: 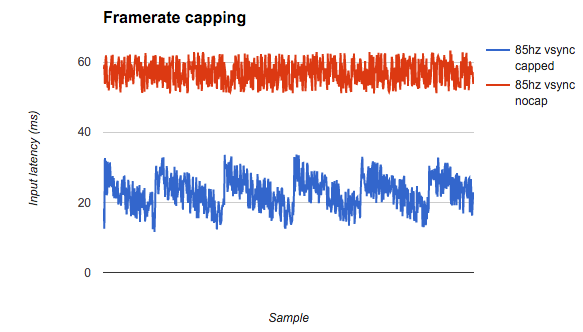 There can still be a weird latency sawtooth even for 119.99fps cap at 120.00Hz strobe (beat-frequencying every 100 seconds).

The great thing is that this sawtooth-changing latency is fixed by RTSS Scanline Sync which allows perfect framerate=Hz without VSYNC ON latency. It's achieved by synchronizing tearlines just right above the top edge of the screen, creating a tearingless VSYNC OFF mode that looks identical to VSYNC ON. The software is a bit difficult to use/calibrate though, and requires a bit of GPU headroom to work reliably.

However, VRR is a good competitive advantage in certain games. ELMB-SYNC is also one of the lowest-lag "framerate=Hz" strobing techniques (and single strobe as long as you keep framerates really high, within 40fps window of max), to avoid the artifacts of low frame rates. Large Vertical Totals can accelerate refresh cycle delivery from PC to monitor, e.g. transmitting a 120Hz refresh cycle in 1/240sec over the video cable. It depends on whether you're using a slightly lower refresh rate strobing than max.

This can minimize strobe lag to the point where your human reaction time advantage usually exceeds any now-smaller lag penalties (from strobing / from capping).

What is VRR strobing?
Top

Some Pro players use Dyac in Valorant, idk about CSGO but the two games are very similar.

This guy is a pro player for Reply Totem and he has multiple #1 scores in Kovaak, he's one of the best mechanical aimers in EU and he constantly plays with pro players at the highest level (he's always playing with/against players from teams such as FPX, Gambit, Ascend, G2,...)

I watched his stream when he was trying the XL2546K.

He said that Dyac didn't really make a difference in Kovaak since he wasn't able to beat his highest scores but once he switched to Valorant he started praising it.

For Warzone where you average about 170 fps which low motion blur monitors are best in your opinion?
Top


I have this monitor, how do you do asus elmb sync? Turn gsync on, then low lag on, vertical sync on in nvcp, and then set fps to 275? Where do I turn elmb on in this setup?
Top
Post Reply
15 posts