ELK wrote: ↑
27 Feb 2020, 06:34
Type C crosshair which is a dot actually can never be centered because it's 2 pixels wide meaning it will offset either left or right 1 pixel. It is also 2 pixels tall meaning it will either offset up or down 1 pixel. I use it in games where sometimes there is a crosshair and sometimes not and they never line up.

Dot type crosshairs, need to be allways pair number side lenght, is the only way to center it. With only one pixel is not possible to center it, due to all common resolutions has pair numbers in both width and height.

If the 2x2 dot crosshair in XG270 can be moved in the screen to any position you want with 1 pixel precision, all perfect. You can't move it with pixel precision ?

It's the game versus OSD crosshairs.

I got the monitor today.
Is this the expected amount of crosstalk I should expect at 100hz and 120hz using purexp? 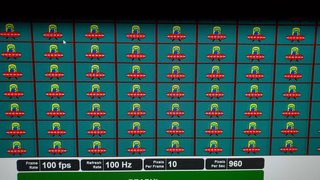 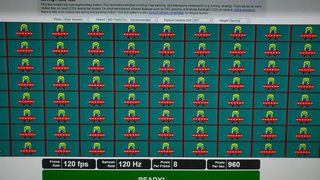 (I used 1/125 exposure to get the pictures, they look very similar to what I'm seeing)
Top

For optimal crosstalk test is needed fullscreen screenshot, some questions:

1) What level of PureXP+ is active with 100Hz screenshot ?

2) You use the default FHD 100Hz resolution that come with the monitor EDID, or a 100Hz custom resolution with Vertical Total tweak to use the native PixelClock scanout speed of 240Hz ?

To get the lowest crosstalk, is necessary use the fastest scanout the monitor can do, and i not know if the 100Hz EDID resolution is maded with VT tweak, i hope yes.

If i remenber correctly, Chief say that tweak PureXP+ for see barely visible crosstalk in center of screen with 120Hz, displacced to upper and botton. And with 100Hz there are less crosstalk.

Crosstalk in your 100Hz screenshot is low at upper line, and progressively increase in below lines. The upper ufo line is the center of your monitor, and the bottom ufo line is the bottom zone of your monitor ? If yes, is the normal behavior, now try other PureXP+ levels to see differences. And check the pixelclock of your 100Hz resolution, sould be around 600MHz, if is lower than 300 means that is not using the native fastest scanout, and result in much more crosstalk.

To see the current pixelclock of EDID FHD 100Hz, you need a EDID tool, maybe Custom Resolution Utility can do this. This tool save original EDID values in OS registry keys, and also user custom made tweaks, so you can check it all. I read this info in CRU forum.
Top

Currently, PureXP levels are currently only available in the upcoming new firmware. PureXP levels haven't factory shipped yet, as far as I know. (If any users have received units with PureXP levels, please let me know. Thanks!

(I used 1/125 exposure to get the pictures, they look very similar to what I'm seeing)

It looks like you photographed only bottom 2/3rds of your screen -- including center and near bottom edge of the screen -- so I'm focussing closer to the top edge of your photographs because that represents your screen centre.

Yes, this is within the expected crosstalk-visibility range for most 1ms panels (IPS and TN) for the amplified-visibility TestUFO Crosstalk Test. It is normal for bottom edge to look worse than screen centre.

Overall, this is much better than any other IPS strobing and VA strobing as you can see in RTINGS / TFTCentral images, and there are some TN panels with worse crosstalk than this. When you switch to www.testufo.com/photo it becomes much less visible.

Also make sure your monitor is not cold (warm up for at least 30-60 minutes first if in a freezing room in the winter) to avoid temperature-related increases to crosstalk -- cold rooms can increase strobe crosstalk by a tiny bit on many LCDs. That said, what I am seeing is already within the range of what I see.

Zoom the TestUFO test via the [Full Screen] button in the TestUFO test, and you'll see crosstalk is lower in the screen centre, than for screen top/bottom. This is normal as the near-crosstalk-free priority is screen centre. It is normal to have slightly more crosstalk at the top/bottom screen edges with global-strobe backlight displays of all technologies. Now if you switch motion tests to www.testufo.com/photo or game imagery such as www.testufo.com/framerates-versus -- it becomes harder to see the crosstalk.

I've cropped a reference of the lower-crosstalk portion of your photographs (portion of screen corresponding to regions closer to the vertical center of screen).

This is what it looks like on my unit, too.

Comparing to my reference XG270, these are quite similar -- I've seen much worse than this on most IPS and VA panels and quite in the middle of TN territory (much better than the worst TN). If you compare these to RTINGS and TFTCentral strobed pursuit images, you'll see your screen-centre PureXP+ crosstalk is lower than most of them at the same refresh rates (And probably darn nearly all of IPS and VA prior to 2020!!).

Note: Stationary photographs (non-pursuit) are acceptable for crosstalk analysis purposes as only one stationary strobe flash needs to be recorded, to determine if the LCD has sufficiently refreshed for that particular single strobe backlight flash.
Head of Blur Busters - BlurBusters.com | TestUFO.com | Follow @BlurBusters on Twitter

Good work Chief, maybe some TN can get less crosstalk if use very short strobe lenght, but people need to know that a good MBR gaming experience is a mix of low crosstalk and maintain decent levels of brightness, color and contrast. 100% Crosstalk-Free screen with very low brightness or whasedout colors is useless.

A serious MBR review, sould allways take in account all values of image quality with MBR On, for example Rtings do not test color, contrast and brightness when test MBR (BFI). Is fustrant, people that buy MBR monitor to use MBR, want to know it. Hope XG270 Rtings review has a very deep BFI review.

Off-Topic: A small imprecision in http://www.testufo.com/photo


These are pretty good results, IMO. On my pg279q, the same UFO test shows two trailing images - one is about half brightness and semi-transparent with the background, and the next trailing image is a half-transparent inversion. The desktop experience (browsing, scrolling, using the OS, etc) is pretty miserable like that, but the artifact is less noticeable in games or movies. I would expect having such a small level of cross talk like this one - maybe a 5% brightness, single trailing image, would completely disappear when watching or playing anything, and might not even be noticeable in quite a few desktop scenarios.
Top

@AddictFPS
I have a normal unit, I cannot control the PureXp level.
I use the native resolutions. I don't know how to create a custom resolution with Vertical Total tweak 240Hz scanout.
With CRU.exe if I set the pixel clock to 600Mhz the Hz is also modified to 250Hz.
I added full screen pictures and the pixelclock reported by the monitor OSD.


@Chief
Good to know my unit isn't faulty or misconfigured.
I guess the technology is still quite limited. I was hoping for no crosstalk at all across the screen.

Do CRT monitors also have crosstalk?

Ignore the black bands in landscape photos and vertical black bands in portrait ones, that's a mismatch between my phone camera aperture and the monitor refresh rate.

Summary of the photos:

Can't tell if the Overclocking option in the monitor OSD affects crosstalk.

And a brightness comparison
10% 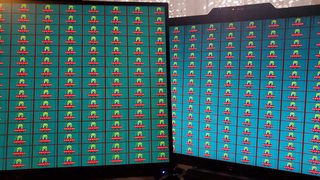 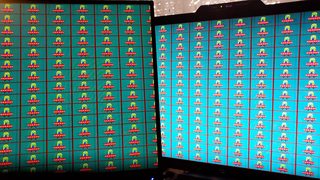 Chief Blur Buster wrote: ↑
28 Feb 2020, 21:17
Overall, this is much better than any other IPS strobing and VA strobing as you can see in RTINGS / TFTCentral images, and there are some TN panels with worse crosstalk than this. When you switch to www.testufo.com/photo it becomes much less visible.

Ansive wrote: ↑
29 Feb 2020, 14:22
Good to know my unit isn't faulty or misconfigured.
I guess the technology is still quite limited. I was hoping for no crosstalk at all across the screen.

Compared to typical IPS crosstalk, what PureXP achieves (within center screen area) is darn near immaculate for the panel type. Goes to show it's all relative... 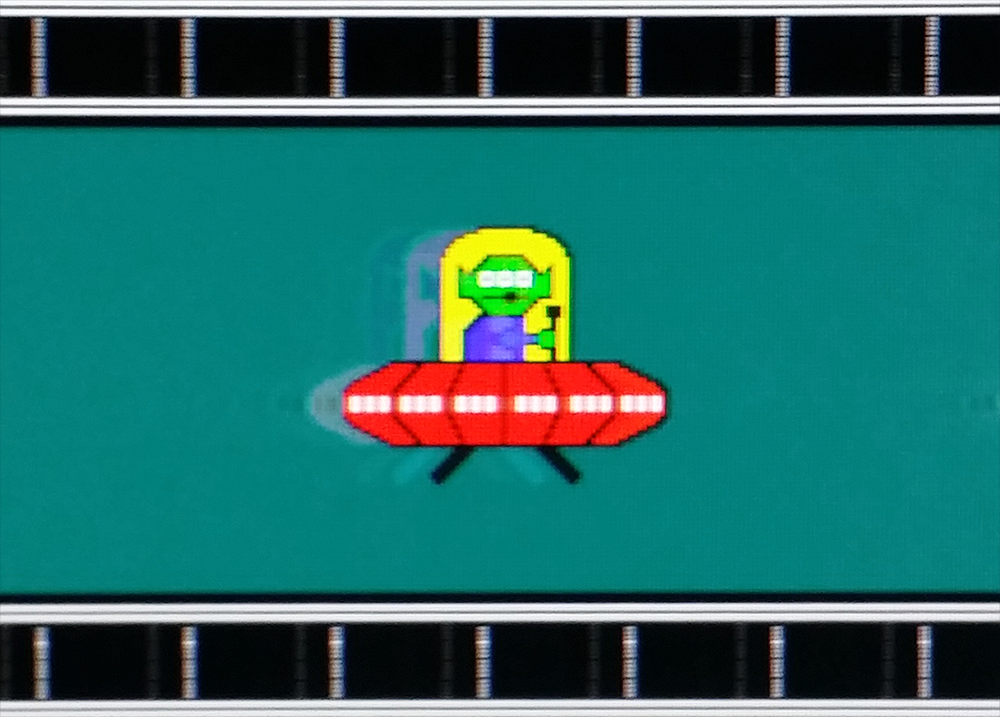 Ansive wrote: I use the native resolutions. I don't know how to create a custom resolution with Vertical Total tweak 240Hz scanout.
With CRU.exe if I set the pixel clock to 600Mhz the Hz is also modified to 250Hz.

Ok, i try guide you, but wait until Chief confirm if this method is correct and secure, im not a monitor tweak expert, i don't want your monitor to suffer any damage because of me.

Add a Detailed Manual, fill all above values, click in the Total checkbox, edit Total Vertical Lines with higher value, you can see that PixelClock increase but frequency is maintained at 100Hz, search the VT value to fit or very close to PixelClock target, click Ok, move [email protected] at the upper position in the Detailed Resolution List to make it the "native" and can override the [email protected] default EDID resolution, Click Ok, restart PC to apply changes.

jorimt wrote: ↑
29 Feb 2020, 14:56
Compared to typical IPS crosstalk, what PureXP achieves (within center screen area) is darn near immaculate for the panel type.

Indeed. It's among the best IPS strobing you can get today.

Even TN can do worse than what this IPS can do at the common 120Hz strobed refresh rate -- about half of my TN monitors get noticeably more strobe crosstalk at 120Hz than this too. It even has less strobe crosstalk than many of my old TN LightBoost monitors, too.
Head of Blur Busters - BlurBusters.com | TestUFO.com | Follow @BlurBusters on Twitter