I'm interested to know if Blur Busters is currently working in more approved monitors. Relevant specs and spected release date. Usefull information to decide if worth it wait.

Panels espected during this year:

Specs like FALD+Strobe or +1000 cd/m2 monitors, should be a serious reason to wait, if motion smothness has more priority that FALD and HDR.

VRR HDMI 2.1 should be very relevant for next gen console users. 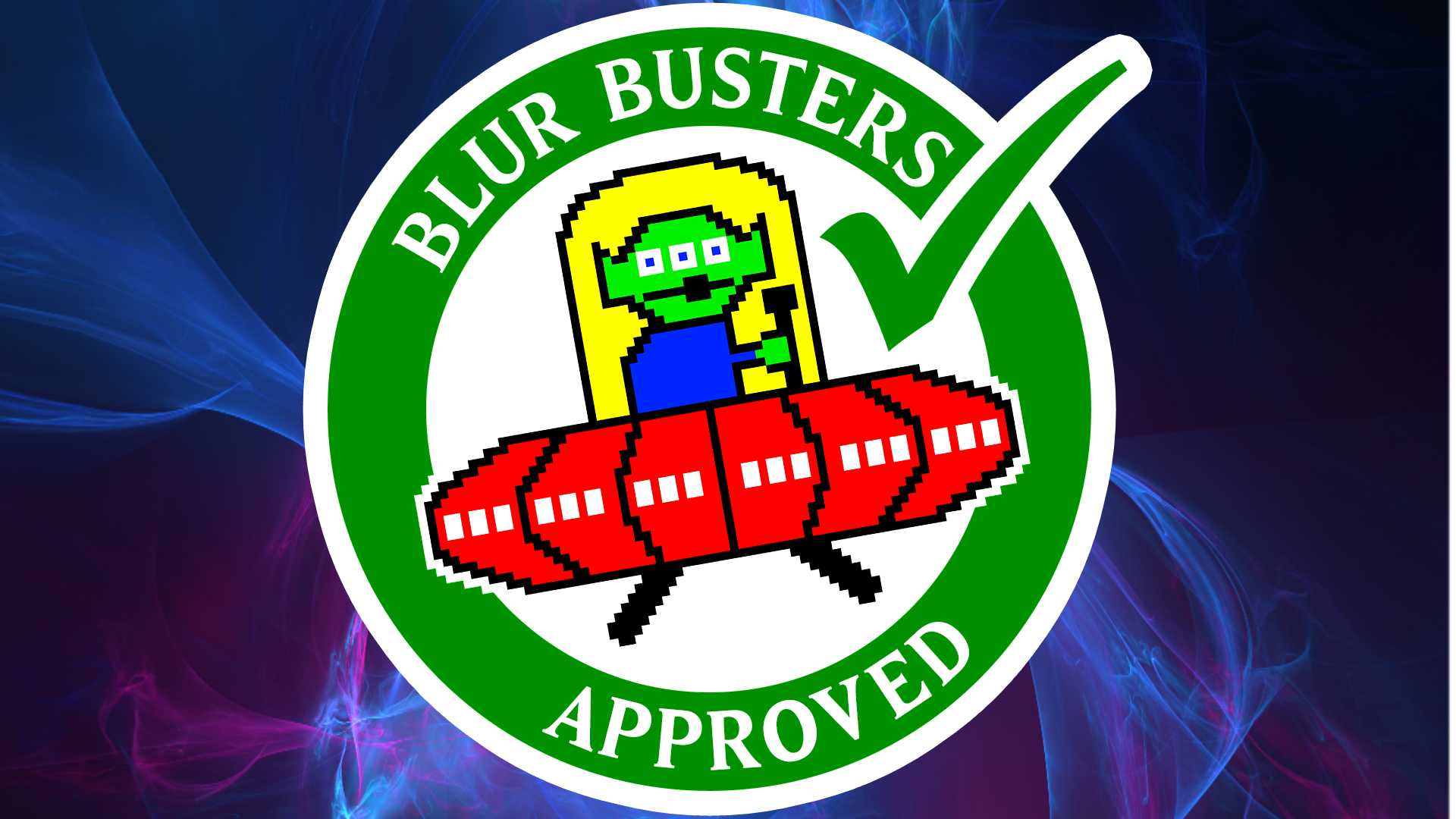 COVID-19 created some major delays in the roll out of the program. We are safe now and our laboratory is operating.

Blur Busters is working on additional models but it will be a much longer than expected wait because of COVID disrupted manufacturer budgets & disrupted monitor engineering lifecycles. I cannot give time estimates at this time.

Additional manufacturers can also reach out, as we are accepting applications (including expedited approval options, if an already-built monitor ticks all required Blur Busters Approved checkboxes before being laboratory tested!)

There are also other Blur Busters initiatives that we are working on at the same time, related to this programme.

Blur Busters is 50% media website and 50% display/research laboratory. So we have had to depend more than usual on our media website income (ads, affiliate) to make up for laboratory shortfalls and survive. We are a very small business compared to the big ones.

As for waiting or not, I have no comment — it is your personal decision with 100% of your right to decide

There are great models already and you can still optionally support Blur Busters via buying monitors (whether Blur Busters Approved or not) from the links below — since affiliates send a commission to Blur Busters.
Head of Blur Busters - BlurBusters.com | TestUFO.com | Follow @BlurBusters on Twitter

I'm not a fan of TN, but if the fastest TN 240Hz can reach better response times that fastest IPS 240Hz, in all GtG transitions, both with overdrive setting that not cause overshot for fair comparison, crosstalk is reduced with strobing, and smearing is reduced without strobing.

Color quality in last generation TN panels like AOC AG273QZ QHD 240Hz is very good, 10bits (8bits+FRC), 125% sRGB, the problem is viewing angles, where color and contrast shift, but seeing it right in front, has a decent quality, enought for FPS players that prioritize speed Vs image quality.

The vast majority of FPS players still use TN, professional FPS players in tournaments almost all use TN. BenQ Zowie and Dell Alienware TN monitors are the most viewed in these tournaments. For sure they have a good reason to choice it. One TN Blur Busters Approved monitor optimized for FPS eSports sound interesting for this market, until IPS fill the gap completely.

A bit related to this, JOLED is triying to bring OLED for gaming monitors, they have a prototype 22" FHD 144Hz since 2018, maybe JOLED is not to far of competing with TN and IPS for the high frequency FHD 360Hz FPS market ?

I have doubts about excesive price, and progressively burn-in caused mainly if used with high brightness (HDR), but anyway can't completely discard OLED for high end gaming monitors. Because there are gamers with much money, that do not care by price or life time, they can bought another monitor each 2 years if burn is a problem.

In the same way they change GPU each year with another +1000 USD model. Or people that buy very expensive OLED TV to enjoy the best film contrast experience, no matter overprice or progressive degradation, just buy a new OLED TV if old start with issues, and on the way better specs. And JOLED can take profit of this $,$$$ market.

I not see it a killer of TN or IPS, just another option. OLED with RGB pixel is FALD at subpixel level, far beyond any current IPS ~1000 zones FALD. Response time is very fast, and transitions from black can be boosted making the black non pure, just a very low idle voltage, to avoid the ramp-up time. Anyway a OSD setting for user choice is the best solution.

BFI (Black Frame Insertion) can be used for motion blur reduction, like strobing in LCD, and both subpixel FALD and BFI can work at the same time. Overshot and crosstalk do not exist in OLED from what i've read. Less MPRT, with 360Hz minimun is 2.77ms, but 100% crosstalk free, short step forward, but a rock solid step. At least i prefer this Vs 1ms MPRT with crosstalk.

Without doubt is a very interesting option for mix both worlds, image quality and speed, the problem is the price. But currently there are several +2000 USD IPS FALD HDR1000, so if the price is not far from this level, maybe worth it.

The Blur Busters Approved Certification Testing program is open to all panels to be tested (TN, IPS, VA), but they still have to meet the tuning requirements of not being significantly worse than non-strobed.

Any panel can get a chance at their full, complete, laboratory testing -- and if the GtG heatmap passes the necessary thresholds of the certification program, then it's possible to get a PASS on the Blur Busters Approved Certification Testing program.

VA is going to be extremely difficult, but theoretically, a 240Hz VA panel may be tunable (with complex Overdrive tricks, including 256x256 granularity OD LUTs + a temperature compensation adjustment or a 100-level overdrive adjustment). There were certain VA television panels that did an excellent job in year 2013 for 3D glasses use, because they did some rather amazing overdrive trickery including timing the strobe flash at the correct point in the GtG curve, so there were often some multi-layered overdrive tricks, which are now done much less often nowadays.

Sheer panel speed (1ms IPS and 1ms TN) only require simple Overdrive Gain algorithms to become low crosstalk. But the voodoo arts of advanced overdrive tricks can go a long way to improving a panel -- but many newer engineers at Chinese TCON/scaler vendors don't even understand some of the more advanced stuff done back in the $2000-panel days, for a $300 race-to-bottom pricing of cheap gaming monitors (unlike yesterday's $2000 3D TVs).

Some truly magical things were done to certain VA panels to partially stomp-out those "slow VA colors" during the 3D glasses days on the more expensive TVs.

But one big problem is VA is super temperature-sensitive. The GtG of certain dark-to-dark transitions can change by as much as 10 milliseconds with just a few degrees of temperature change! This is a big problem for VA monitor users in tropics and artic, considering many monitor manufacturers only test VA panels at the industry standard GtG-testing room temperature of 20 degrees C (about 68 degrees F). And tune overdrive based on this.

Many manufacturers try to simplify Overdrive by having too few settings. And many manufacturers cheap out on the overdrive lookup table size (e.g. only 17x17 interpolated to 256x256), which does a disservice to the problematic VA-panel dark-to-dark transitions, as some of those GtG heatmap hotspots are much smaller hotspots than a 17x17 OD LUT, for chrissakes. Sometimes Blur Busters knows things some monitor engineers do not -- they study hard, they work hard, but classes don't even teach this stuff.

Yes, we do teach this stuff (actual photo of a Blur Busters classroom at a display manufacturer!). Just like a SpaceX rocket gimball engineer may not understand the firmware language of an inertial control unit, Blur Busters has an important advocacy/research role in the refresh rate race to retina refresh rates. In year 2019, I have already been flown over both the Atlantic and Pacific oceans on a contract basis to run these classrooms manufacturers (from PMs to Marketing to engineers).

Two years ago, I wasn't sure IPS wasn't going to be able to speed up this dramatically to narrow the race -- but IPS did -- thanks to faster IPS technology now out. All 3 major panel technologies are currently speeding up, and all horses are valid horses in the refresh rate race.

The bottom line of what I am saying is that the Blur Busters Approved program is it is open to all panel technologies to be tested. If it's fast enough, and passes the strobing quality thresholds, then it passes. Sure, it will be much harder for VA, but it is not impossible for VA, based on what i've seen already -- I've seen those bad VA colors be almost 10x faster with some really advanced overdrive tuning (not typically found in sub-$1000 monitors).

I also have some new inventions that will make advanced overdrive much easier, but it will require manufacturers to support the User-Programmable Overdrive Lookup Table initative. Once the first monitor arrives, we will be able announce some dramatic cost cuts on manufacturer overdrive tuning, to massively improve overdrive tuning quality (better than most chinese scaler/TCON vendors), especially for strobe tuning. Better overdrive quality, with faster GtG without overshoots, for lower prices, even on some existing panels! Ultimately, this will be a one-button easy feature.

But to help speed up this quality, we will need a user-programmable overdrive lookup table feature.
Head of Blur Busters - BlurBusters.com | TestUFO.com | Follow @BlurBusters on Twitter

I think monitors that don't allow 60hz strobing should not get the certification.
Top