I've managed to move the industry needle a little bit. People have long been whining, "Please Add 60 Hz Single-Strobe". It flickers badly like a CRT but some of you still love the nostagilia CRT-clarity zero-blur at 60 Hz refresh rate for video, for sports, for emulators and/or for gaming consoles limited to 60 Hz. And we know framerate=Hz is a requirement from the CRT Nirvana Guide for Disappointed CRT-to-LCD Upgraders. And that's tough when framerate is 60 frames per second.

This is a sideways movement, a feature-addition to accomodate additional specialized use cases: Official Blur Busters 60Hz Single Strobe List

Great news indeed! The more options the better.
Thanks

Eve single strobing minimum is 60Hz, or is unlocked ? Europe video streaming without HFR is still 50p 25i, require 50Hz like in CRT for the best motion. Is interesting have the option to test it, and user choice, flicker with 50Hz or double image with 100Hz.

With Eve should be highlighted the integer scaling ! This allow 4K monitor at 4K or FHD, both completely sharp, native pixels, non interpolated. This has much importance for instance console gamers that want buy PS5 for 4K, but want also enjoy old FHD consoles. I not know if LG CX apply integer scaling when receive FHD signals. Also 60Hz single strobe input lag sure is much less on these Eve monitors Vs 31ms of LG TV at 60Hz BFI High.

There are several versions of LG OLED48CX, at least these:

If anyone can tell us the differences, it would be greatly appreciated.

OLED rolling scan help reduce flicker, this need to be highlighted in this 60Hz anti motion blur thread. LG OLED maybe can also do BFI at 50 and 100Hz, not only 60 120, at least with Europe version of this TV to enjoy 50p 100p sports streaming.

You're now using a virtual computer monitor inside VR. And the 60Hz low-persistence emulates CRT low persistence very well. You can configure the monitor to IMAX size, so you have to look around and up/down to see the screen. Kind of like a 100 foot CRT tube, if you wanted. You can also configure it to like a tiny CRT tube size at really close viewing distances.

As a bonus, after these changes, you can use your Quest 2 as a cordless VR headset for your PC VR games (Best experience via WiFi 6 router), but the purpose of these instructions is to get 60 Hz single strobe Virtual Desktop inside your VR headset. The Quest essentially becomes a multitool of multiple modes of operation after this change,

Be noted there is a smidge of latency (approximately 20ms lag from H.EVC streaming for direct cable connect), maybe about 25ms lag if you use WiFi 6. Compression artifacts generally won't be visible at maximum bitrates. Virtual Desktop will work both cabled and wireless for PC gaming. So you can use it like a cordless monitor for your PC anywhere else in the house, as long as you're sitting within WiFi range of your router. Essentialy you use the VR headset like a cordless HMD computer monitor for your regular gaming. You can make the monitor as big as an IMAX screen inside VR, requiring you to look up/down to see the screen, or make the monitor as small like a 14 inch CRT tube. The monitor stays fixed relative to physical space, so you can comfortably tilt/turn/rotate your head, and even look downwards to see your virtualized floor or virtualized theater seat or your virtualized sofa -- and virtually move the screen closer/further from you. Screendoor is surprisingly low on the newer Quest 2, given its extremely high-def screens per eye. The Oculus controllers can emulate as regular gamepads for PC games and emulators.

Currently, IMHO, this is one of the best "60Hz single strobe PC monitor" money can buy for true real world MPRT(100%) under 1ms at 60 Hz refresh rate. As long as you're OK with a very smidge of latency. Funny that the best 60 Hz single-strober is, currently a VR headset, being used to emulate a virtual computer monitor in 3D space...

(Tested by me on my Quest 2. Works great.)
Head of Blur Busters - BlurBusters.com | TestUFO.com | Follow @BlurBusters on Twitter

Provisionally, I'm hoping for fully unlocked. At least a 48Hz minimum. No guarantees. Convincing manufacturers to 60Hz is hard; going below to 50Hz is a bonus.

EDIT, for those monitor manufacturers who view this thread: 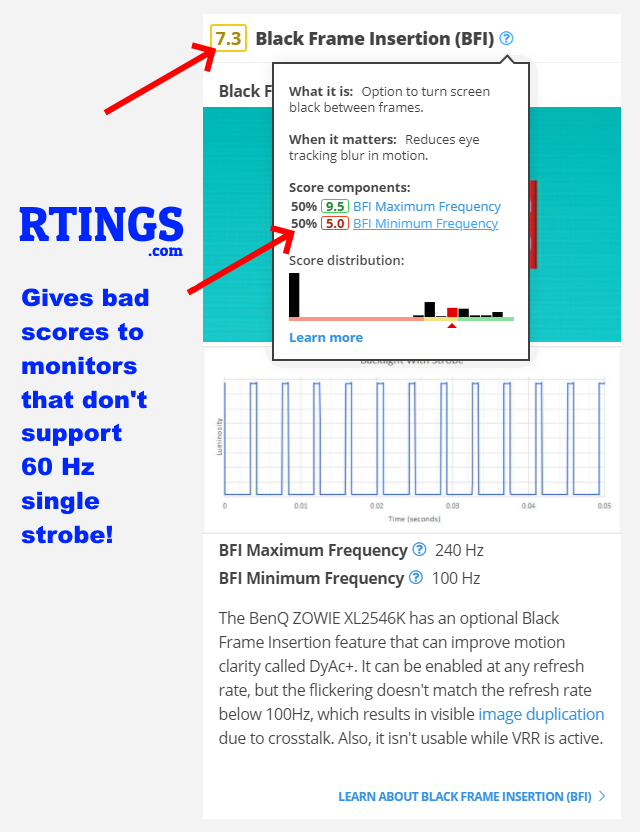 Chief Blur Buster wrote: ↑
30 Oct 2020, 20:50
I've managed to move the industry needle a little bit. People have long been whining, "Please Add 60 Hz Single-Strobe". It flickers badly like a CRT but some of you still love the nostagilia CRT-clarity zero-blur at 60 Hz refresh rate for emulators and/or consoles.

Fortunately, I don't seem to be getting eyestrain with the Oculus Quest 2 single-strobe, but its brightness is subdued most of the time. \\\\

The problem is that there's literally more than 60 years of legacy 60fps material dating back to the first videotape recorders that preserved 60Hz motion resolution -- so we have a big use for CRT 60fps emulation just to watch legacy material in its original CRT zero-blur glory.

SIXTY YEARS of SIXTY FPS..... Chosen because our electricity is 60 Hz alternating-current, and it was easier for the first TVs to sync to that, and also because it's fairly close to our flicker fusion threshold in the era before flicker-free displays.

CRTs were dimmer and smaller than today's monitors so you need to mimic the situation a bit better.

Recommendations for Eliminating / Reducing 60Hz Eyestrain
Many manufacturers test their strobing in laboratory-like environments which probably creates more eyestrain than consumer settings that exercise these mitigation measures. That said, users should have the choice, even if hidden behind a "Warning: 60Hz Strobe Will Flicker" disclaimer or such.
Head of Blur Busters - BlurBusters.com | TestUFO.com | Follow @BlurBusters on Twitter

We will see how that looks. All I ask is something like this: viewtopic.php?f=13&t=7520
Is it possible to get such level of motion clarity with modern IPS panels?
Top
Post Reply
93 posts