This is the official discussion topic for Blur Buster's 15-part "G-SYNC 101" series featured on blurbusters.com:
http://www.blurbusters.com/gsync/gsync101/ It is a continuation of my now archived original "G-Sync 101 w/Chart (WIP)" topic here:
http://forums.blurbusters.com/viewtopic.php?f=5&t=3073 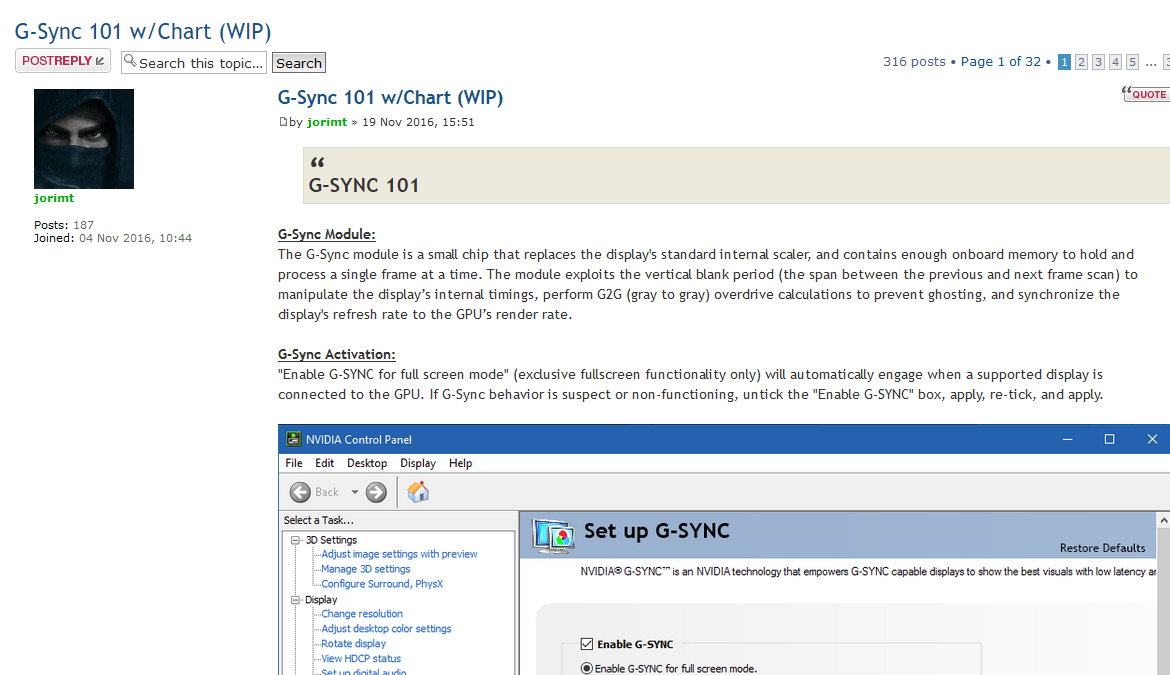 RealNC wrote:The input lag reduction appears with Fast Sync + v1 limiter cap. That is true for both G-Sync on and off (just like RTSS.) Which is indeed weird and doesn't seem to make much sense. Since I'm capping using a severe limit (23FPS), there's no chance I'm exceeding the G-Sync range and thus fast sync never kicks in. And yet, selecting fast sync is the only way I get the same "up to 1 frame" input lag as I do with RTSS.

After I'm done with the main tests, I'll update the driver and inspector and do a quick G-SYNC + Fast Sync + v1 FPS limit at a single refresh rate with the new setting and see what I get. 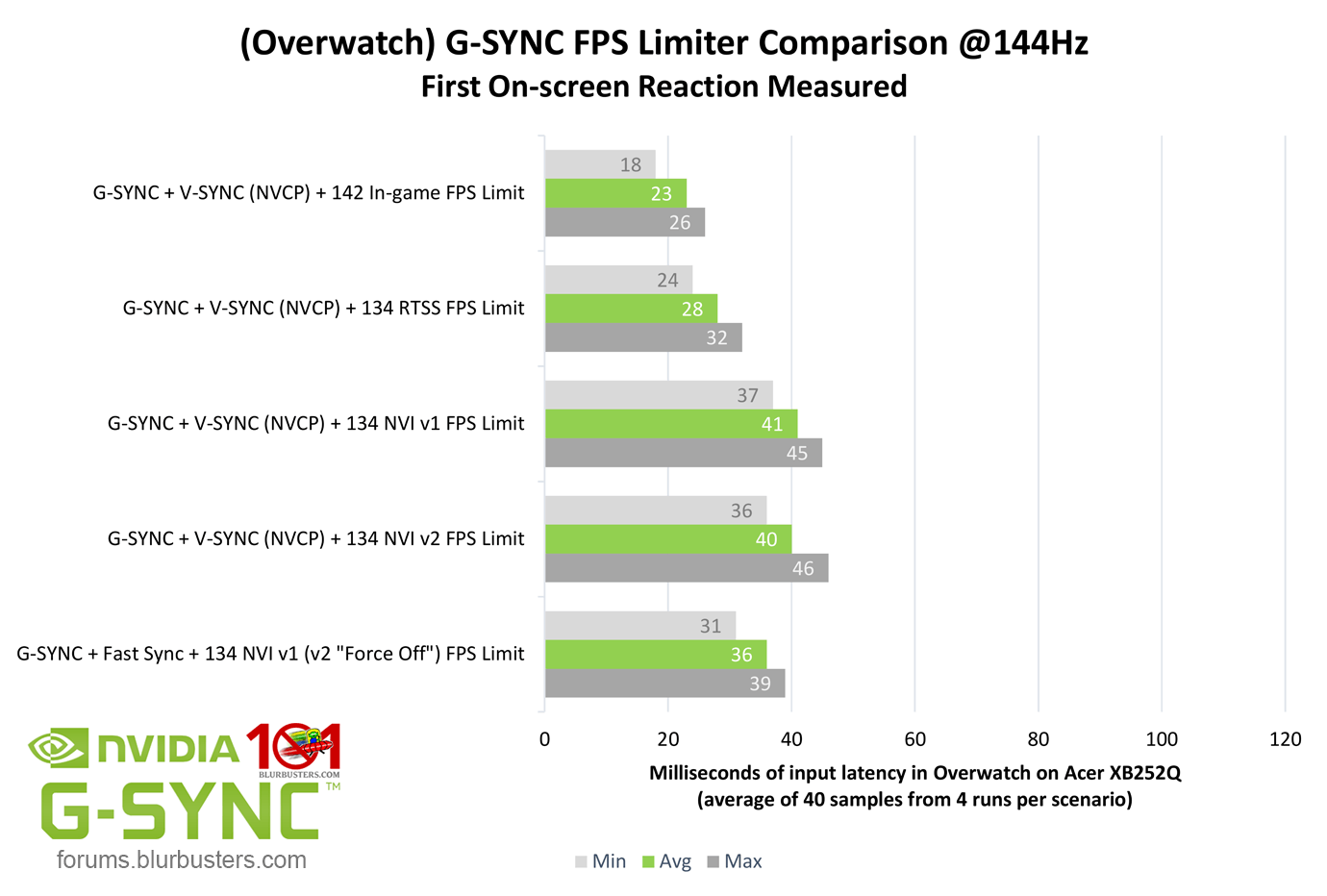 If you've already read my article, you'll know that G-SYNC + Fast Sync behaves like G-SYNC + V-SYNC anywhere below 138 FPS at 144Hz. With G-SYNC, the standard v1 and v2 limiters add more latency to it than they do to standalone V-SYNC, for whatever reason (perhaps the clashing of frame pacing behaviors between the two).

The new override mode does seem to reduce the input latency by 1 frame or so. What it does to standalone V-SYNC, I'd have to test.

I didn't include any of this in the final results, as it could simply be a temporary driver quirk that could change or disappear in future releases. We'll give it some time, and if it remains, I may revisit it later on.

Fantastic and congratulations on finishing the project!

One thing not mentioned is that the behavior when the frame rate cap is not reached (capping to 142FPS but the game can only reach 135FPS for example) heavily depends on what "max pre-rendered frames" is set to. CS:GO and OW use 1 by default, so input lag should only increase by at most 1 frame. But in other games that use the default of 3, input lag will be increased by a lot more.

The results are only valid IF the frame rate cap is actually reached by the game. If someone caps to 142FPS on a 144Hz monitor, following the article to the letter, but his system isn't capable of 142FPS, input lag will go up disproportionately.

This is (IMO) a useful thing to note for people who look to get the lowest input lag possible, especially since it's counter-intuitive (lowering your FPS gives lower input lag.)
Steam • GitHub • Stack Overflow
The views and opinions expressed in my posts are my own and do not necessarily reflect the official policy or position of Blur Busters.
Top

Thanks RealNC! It was nearly two months of steady work, but I believe it was well worth it.

I debated whether to include that section at all, and added it last minute to be thorough and avoid possible unnecessary follow-up questions on the omission of the MPR setting.

I primarily focused on only one aspect of the input latency chain, so a secondary effect such as MPR with such variable impact was neglected. I'd really have to do a dedicated MPR article one day to get to the bottom of it all.

And honestly, I don't know as much about the setting as you do, and am still processing your information. To be clear, does the behavior you describe occur only when you have an FPS limit in place and aren't hitting it, or does it also occur at any framerate below the refresh rate without an FPS limit applied and MPR set to anything other than "1"?
(jorimt: /jor-uhm-tee/)
Author: Blur Busters "G-SYNC 101" Series

jorimt wrote:To be clear, does the behavior you describe occur only when you have an FPS limit in place and aren't hitting it, or does it also occur at any framerate below the refresh rate without an FPS limit applied and MPR set to anything other than "1"?

It occurs with and without a frame limiter. If a game renders at, say 95FPS, input lag is the same regardless of whether you limit FPS to 141 or not at all.

This is also a bit counter-intuitive to the "RTSS adds up to 1 frame of latency" statement. In this scenario, RTSS will REDUCE input lag, not INCREASE it if you cap the game to 94FPS.

However, this should only be a side-note, as it does have nothing to do with g-sync (which is the article's subject matter.) It is however, a very useful fact for people who want the most lag-free experience they can get. Even if you don't use g-sync and play with vsync OFF, RTSS will reduce input lag by making sure the game gets frame capped.

It's weird, I know, but it's what seems to happen with the majority of single player games. Games tuned for latency (like CS:GO and OW) don't seem to follow this pattern. Games like Witcher 3, Fallout (all of them), Deux EX, you name it, are exhibiting this behavior.

The technical details behind this seem to be related to single-player games not trying to keep any kind of synchronization between CPU and GPU. The "pre-render frames" mechanism is inherently an asynchronous concept, and thus render or frame presentation or buffer flip operations seem to get queued even with vsync off. When using frame limiting, even with RTSS, it would seem that things become synchronous; only one operation is in the queue, which basically means it's synchronous; the game is blocked from doing anything further until the single queued operation is completed.

Someone with more experience with the D3D or GL APIs would most probably have some insight to give here.

I also have to wonder if a frame limiter like RTSS could be modified in such a way that it behaves as if the frame cap is always reached, regardless of what you set it to. For example by blocking at the Present() function call (D3D) regardless of whether the frame time is lower than the target time or not. I looked for any open source frame limiters out there that I could use to experiment with this, but there don't seem to be any

Steam • GitHub • Stack Overflow
The views and opinions expressed in my posts are my own and do not necessarily reflect the official policy or position of Blur Busters.
Top

I forgot to mention how to test this. I think I did somewhere in an old post, but here it is in case I didn't. (We'll use Witcher 3, but any other game should work, including CS:GO and OW.)
It's not just the mouse, obviously. If you play the game you'll see that without a cap, input lag is huge without RTSS. As soon as you cap the frame rate, and IF the game hits that cap, input lag is obliterated.

What I cannot test, however (only you can, hint hint

), is whether MPRF 1 when not hitting the cap gives as low input lag as MPRF 1 + cap. If not, meaning MPRF 1 (the best that can be done) has higher input lag than capped frame rate, then that's kind of huge news for people who prefer the lowest latency possible, even it means giving up some extra FPS. And it means RTSS (and other cappers) have a big opportunity here to introduce a latency reducing mode that knows how to make the game always hit a cap, (a new "dynamic/adaptive" cap; probably a fixed frame time offset regardless of current FPS (again, an open source limiter would have allowed me to do this myself, but, well.)
Steam • GitHub • Stack Overflow
The views and opinions expressed in my posts are my own and do not necessarily reflect the official policy or position of Blur Busters.
Top

I may do some more tests and create a separate topic about that in the Input Lag sub-forum sometime in the future. No ETA, but definitely a possibility. It's worth investigation.

That said, until more is known about the behavior, my suggestion featured in the article still stands for simplicity's sake (it's basically performance stability vs. possible input latency decrease)...for now

A tip for g-sync windowed mode: Instead of restarting, if the setting doesn't seem to apply, you can kill dwm.exe in the task manager. It will restart automatically and should get g-synced after that.
Steam • GitHub • Stack Overflow
The views and opinions expressed in my posts are my own and do not necessarily reflect the official policy or position of Blur Busters.
Top

Yeah, it happened twice to me in testing, so I thought I'd note it down to be safer than sorry, because it can happen. Good tip though.

It can also happen if you have a game launcher open while applying the G-SYNC setting; sometimes the game launcher is attached to the game exe process, and when the G-SYNC setting is switched from fullscreen to borderless/windowed mode, the change may not be recognized until a full game restart.
(jorimt: /jor-uhm-tee/)
Author: Blur Busters "G-SYNC 101" Series

Regarding ultra-low lag VSYNC ON tips and tricks:

While I'm probably going to write that one, this may be written by another Blur Busters writer (jorimt, spacediver, or others) who steps forward on this subject matter (If you're a sufficiently "Blur Busters Science Savvy" with freelance-writing experience and lots of experience with reducing lag of VSYNC ON, I want to hear from you, squad[at]blurbusters.com ...)

For those very fast games that you want to run stutterfree/tearingfree at maximum refresh rate -- Capped GSYNC/Capped FreeSync produce the ultimate low-lag "VSYNC ON" look -- the fluidity of VSYNC ON with none of the VSYNC ON buffer lag.

But not everyone has GSYNC monitors, so more advanced frame-capping tricks (RTSS, NVInspector, GeDoSaTo, etc) -- and ways to prevent the yo-yoing "sawtooth-latency" effects -- will be needed. On this note, we'll also be researching the "Ultra-Low-Lag VSYNC ON" subject matter throughout this year for future articles and HOWTOs! This should be of very big help to strobe-backlight users, who are often stuck using VSYNC ON.

Forum Rules wrote:  1. Rule #1: Be Nice. This is published forum rule #1. Even To Newbies & People You Disagree With!
2. Please report rule violations If you see a post that violates forum rules, then report the post.
3. ALWAYS respect indie testers here. See how indies are bootstrapping Blur Busters research!