Haste wrote:Except that for the same motion it will travel a bigger amount of pixels at 200 dpi than at 80 dpi

You will notice motion blur in the latter much, much, much more easily.

Sounds like an idea for a new TestUFO test.

Have three images scroll, each one half the resolution of the previous one, using linear scaling (no blurring.)
Steam • GitHub • Stack Overflow • Twitter
The views and opinions expressed in my posts are my own and do not necessarily reflect the official policy or position of Blur Busters.
Top

But yes, it is an idea for future UFO test. Not as accurate as comparing two displays, but it would show the effect. Scaling algorithm can be selectable, but would be much more minor than effective underlying resolution and dpi.
Head of Blur Busters - BlurBusters.com | TestUFO.com | Follow @BlurBusters on Twitter

darzo wrote:Makes sense. How will the pixel response time being decreased to .5ms (the other apparently more realistic figure drops as well) impact blur?

Many manufacturers say one or the other, whichever number is better -- which is a little unethical. They should quote BOTH numbers for all monitors. (We might eventually begin an advocacy to begin that trend someday).

GtG response of 0.5ms accurately
If GtG is already a tiny percentage of a refresh cycle, almost no effect. 60Hz and 120Hz would not visibly improve. 240Hz may improve marginally, and 480Hz may more noticeably improve. MPRT totally dominates motion blur over GtG when GtG is less than half a refresh cycle.

What good is 0.5ms GtG for?
It's still useful. 0.5ms GtG will mainly help ultra-high refresh rates and improved strobe backlights (reduced strobe crosstalk) due to the necessity of "cramming GtG into the time period of VBI" (for advanced technical explanations, see Electronics Hacking: Creating a Strobe Backlight as well as Advanced Strobe Crosstalk FAQ.

GtG is not the same as MPRT
Having a successful 0.5ms MPRT means GtG is already far less than 0.5ms, since MPRT is refresh visibility time, and GtG lengthens that (instead of a frame instantly replaced by frame, GtG means a frame "fades" into a frame. The faster the GtG, the faster the fade. This is seen as a fade-wipe in high speed videos, like high speed video of LightBoost -- which also shows an LCD running in non-LightBoost operation too as well. You can have instant (0ms) pixel response but 0.5ms MPRT -- that simply means each individual frames were effectively visible for 0.5ms. Either achieved via strobing (0.5ms flashes of each refresh cycles). OR if you filled all black periods with 0.5ms frames, that requires 2000 frames per second (at 2000Hz) to avoid the need of any blackness. Same blur either way, MPRT 0.5ms is 0.5ms of motion blur, whether it's strobed (easy at lower Hz) or unstrobed (needs insane Hz).
EDIT: New article www.blurbusters.com/gtg-vs-mprt

MPRT(100%) cannot be less than GtG on sample-and-hold without strobing
As a rule of thumb, slow GtG tends to lead to at least equally big MPRTs. If you want 0.5ms MPRT, that means your GtG needs to be far less than 0.5ms. During the 1990s, we had very slow 33ms LCDs which motion blurred over multiple refresh cycles (called "streaking") since 33ms is more than one 60Hz refresh cycle long. More motion blur = more MPRT.

However, MPRT can be less than GtG with strobing
That's because MPRT is the visible part, while GtG can occur in the dark part. This is commonly done with ULMB. 120Hz means an 8.3ms refresh cycle. (1/120sec = 8.3ms). You only need 1ms to make the refresh cycle visible. That means you have 7.3ms of total darkness to let GtG complete merrily unseen by human eyes. (Realistically, you have less time than that, due to scanout latencies, but you have way more than 1ms of darkness to do GtG unseen by eyes). So you can have 2ms GtG and 1ms MPRT with a strobed ULMB display. Simply because GtG occurs during the dark part of refresh cycle and MPRT is the visible part of the refres cycle.
.... For simplicity-of-explanation, I'm omitting scanout latency (the finite amount of time to refresh a screen top-to-bottom, since all pixels don't begin their GtG cycle simultaneously -- so need to cram GtG into a large VBI), but that's the gist -- put the GtG in the dark cycle and MPRT is the visible part of refresh cycle -- allowing MPRT to be smaller than GtG when a strobe backlight is used.

GtG can be less than MPRT
GtG stops becoming the motion blur limiting factor when GtG is a tiny fraction of a refresh cycle. MPRT becomes the dominant factor for motion blur.

The human eye can tell apart 0.5ms MPRT and 1.0ms MPRT during ultra-fast motion tests with extremely fine details. You can see it for yourself with ULMB.

1. Look at TestUFO Panning Map Test at 3000 pixels/sec, you can easily see the effects of ULMB Pulse Width adjustments.

2. Adjust ULMB between PW100%, 50% and 25% which roughly corresponds to 1.5ms-2ms MPRT, ~1ms MPRT, and ~0.5ms MPRT. It varies from ULMB monitor to monitor. TFTCentral often has the pulse widths, and pulse widths typically corresponds to MPRT. Turn off your lights and close all your drapes, as low "ULMB Pulse Widths" will be very dark on most monitors. However, some newer ULMB monitors manage to pull off 0.5ms MPRT with approximately ~100cd/m2

So as you can see, strobeless ULMB requires Hertz insanity. To the surprise of many people. But the motion blur mathematics is beautifully simple (Blur Busters Law).
Head of Blur Busters - BlurBusters.com | TestUFO.com | Follow @BlurBusters on Twitter

As Blur Busters notices a pattern...

With displays already maxing out in retina quality, things like HDR and Hz become new areas of rapid improvements of focus. Blur Busters makes a Near Year's prediction:

But hey Mark I actually made a post over at Neogaf about your "amazing journey to 1,000hz displays" https://www.neogaf.com/threads/old-crt- ... -262475336 as I am trying to raise awareness about the whole thing. Honestly I remember when I first stumbled upon your website back in 2018 and read that article and it totally changed the way I look at modern TVs, in fact I keenly remember when I first got my 60 inch Vizio back in 2015 and since it was a new TV I was watching it like a hawk looking for any imperfection I could find, I was playing Destiny on it on my Xbox one at 30fps and I was noticing artefacts that are created due to sample and hold, but of course this was 2015 and I had no idea what sample and hold was, I remember googling "motion blur on TVs" and really found nothing that explained exactly what causes motion blur on TVs, then in 2018 I stumble upon blurbusters and now I have seen the light! Now I know that what I was noticing on my TV back in 2015 was a result of the sample and hold which happens due to low fps. 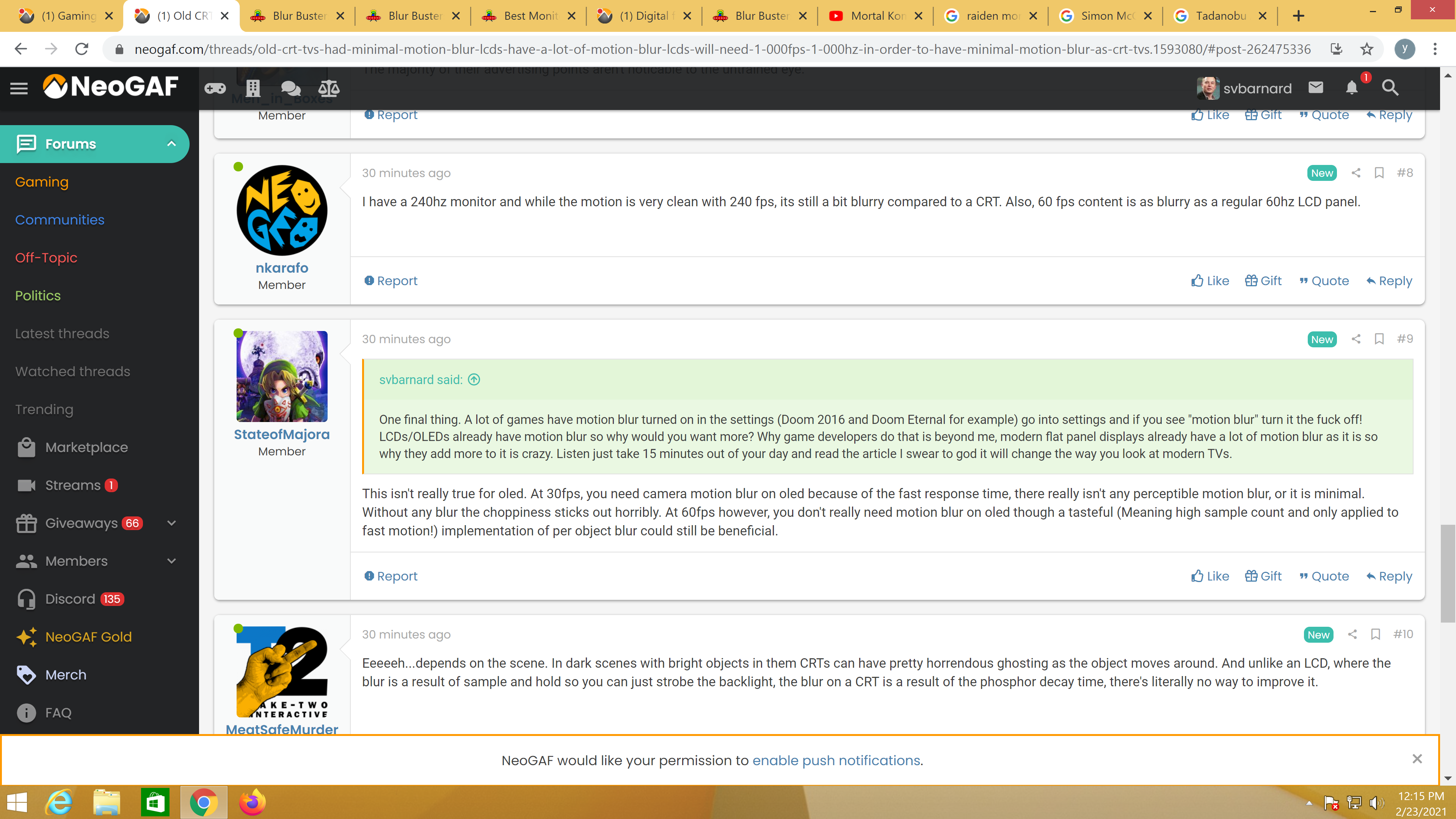 Can you please respond here and I will copy and paste your answer over in Neogaf, I'll also provide the URL to your answer. I think you're the only person on Earth who could answer that. I mean what is he talking about? Is he wrong or right?
Top

I've got an account at NeoGaf that I haven't used in years, and this is one of the extenuating circumstances where I have to do some Blur Busters myth busting...

Here are my most useful and educational replies:

- Display Science: Explaining the Stutter-to-Blur Continuum
- Problems and solutions of strobe backlights
- The need for LCD GtG to be a tiny fraction of a refresh cycle, not just less than a refresh cycle
- Commentary of VR LCDs beating CRT motion clarity
Head of Blur Busters - BlurBusters.com | TestUFO.com | Follow @BlurBusters on Twitter