"A previous model of motion perception used in engineering display design predicted the need for a 360 FPS (frames per second) and 1080-line display and image signal format system, in order to match the viewing of reality. Now that 360 FPS gaming monitors are on the market, the model is revisited with twenty years of new studies, display technology advancements such as HDR (high dynamic range), and inclusion of new viewing tasks such as performance gaming. This revised model is then used to make new predictions for display and signal format requirements to achieve distortion-free viewing of reality and synthetic signals that do not impose limits to human performance."

I haven't dove deeply into the research but the (attached) summary table and the highlighted value seemed noteworthy. 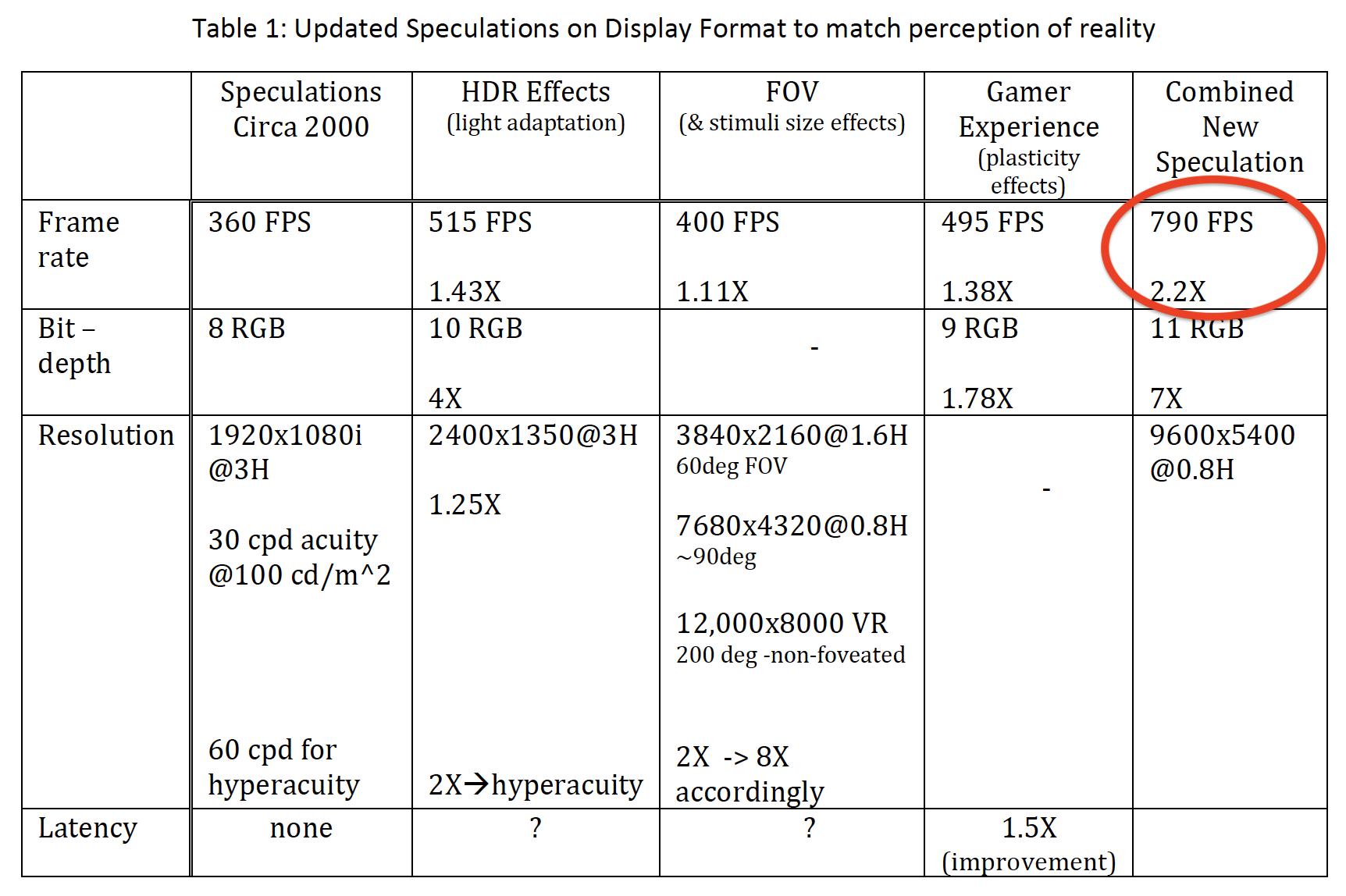 I skimmed through the paper and I have to say that I don't think that 790 Hz is enough and that it is underestimated at least by factor of 2. When I tried to calculate required refresh rate from dynamic visual acuity based on other papers I usually got results in the range of 1.5 - 2 kHz, see my post here viewtopic.php?f=7&t=8431#p65546 for one example. So there is clearly tension between result presented in this paper and other works.

Furthermore, I think that Chief mentioned somewhere that there is visible difference between 1 ms and 0.5 ms persistence when using a strobed display. This means that the limit is clearly lower than 1.27 ms derived from 790 Hz mentioned in this paper. Can anybody confirm decreasing persistence to sub 1 ms levels leads to visible improvement in motion clarity? I don't own strobed display so I can't do the test by myself.
Top

It's still woefully low of an estimate.

Having seen 1000Hz+ prototype displays the vanishing point is definitely well beyond 790 Hz.

This writer is going into complex math when there's some simpler law-of-physics being overlooked (missing the forest for the trees). You must look at all weak links that deviates a display away from reality -- motion blur, pixel response, stroboscopic artifacts.

FOV actually has a much bigger amplifying factor than 1.11x when it comes to video game material (rather than video material). I argue that the original researcher may have used suboptimal test material (video material) that attenuated the FOV factor.

Here we define "retina refresh rate" as a simple human term for refresh rate where no further human benefits are derived -- as a borrowing from "retina resolution" coined by Apple. We use this terminology because a wider segment of our audience sees it as a self-explanatory term.

Rebuttal Exhibit 1
As a simplified math, imagine a large display showing scrolling fine text such as www.testufo.com/framerates-versus ... Sample and hold always at least always has a minimum of "Blur Busters Law" worth of motion blur: 1ms of unique frame visibility time translates to 1 pixel of motion blur per 1000 pixels/second: Retina refresh rate is at least about ~1920 Hz for 1920 pxiels/sec motion on a 1920x1080 display.

Rebuttal Exhibit 2
We can emulate a higher-Hz display via knowing frame visibility time translates to motion blur. There's two ways to reduce motion blur -- flashing a frame briefer (like a CRT), versus adding more frames (higher Hz at higher framerate). The motion blur of 120fps versus a 1/120sec flashed frame, is identical. So we can use briefer pulses, of an adjustable-persistence display (such as one that supports a Strobe Utility). A good test is TestUFO Panning Map Test which includes tiny 6-point-size text that is easily rendered hard-to-read by 1 pixel or 2 pixel of motion blurring. We already know that sample-and-hold of 1ms persistence is 3 pixels of motion blur per 3000 pixels/sec. So there's already motion blur visible to human eyes at [email protected] confirmed (the motion blur is identical between (A) of [email protected] versus (B) of a 1ms MPRT strobe-flashed display of a lower Hz), assuming framerate=Hz). Here we use MPRT(100%) for mathematical simplicity rather than MPRT(10%-90%) that industry standard MPRT is, and MPRT(100%) is guaranteed at least same or slower than MPRT(10%->90%), so any MPRT errors here will simply raise the retina refresh rate. Now adjust the monitor between MPRT 0.5ms and MPRT 1.0ms (0.5ms backlight flash versus 1.0ms backlight flash, on a good strobe-backlight gaming monitor) and it's a human visible difference in this TestUFO Panning Map Test. We're essentially simulating a difference between a [email protected] display versus a [email protected] display (0.5ms MPRT sample-and-hold), via the use of a strobe backlight display.

Rebuttal Exhibit 3
There's stroboscopics to be aware of -- phantom arrays, wagon wheel, etc -- www.blurbusters.com/stroboscopics .... For eliminating BOTH stroboscopics and motion blur, also the additional need to oversample the Hz (as seen at bottom of the UtlraHFR FAQ -- www.blurbusters.com/ultrahfr ...) because of the need to have blurless sample-and-hold COMBINED with a 360-degree shutter (continuous open for whole frame) -- also raises the retina refresh rate, because of the extra blur induced by a 360-degree shutter necessary to eliminate stroboscopic artifacts. So this creates a necessity of oversampling the refresh rate to eliminate ALL artifacts (blur _AND_ stroboscopics).

Their model neglects to consider other "weak links" such as the Vicious Cycle Effect -- bigger-FOV displays have a higher retina refresh rate for the reasons explained.

They're essentially popular sciences simplifications but it's pretty much an E=mc^2 simplification of display physics that really makes it easy to extrapolate the retina refresh rate reliably -- we've been successful in accurate estimates.

But I've also been cited in more than 20 different peer reviewed research papers as well, simply because researchers who experimentally tested our techniques find that we've been reliably correctly. If Scott Daly dismissed Blur Busters earlier, there's even less reason to do so now -- the Blur Busters website was recently reorganized to make basic display research easier to find, via the purple Research tab at the main website.

I may have to begin writing rebuttal papers sometime. Usually I let other researchers test my much simpler experiments that I describe (and they find out I'm right -- which is why I have so many citing me nowadays), but I might have to directly author a paper. However, first, I'll attempt to reach Scott Daly and have an academic-to-academic discussion...

I appreciate he acknowledged it as a speculative estimate. However, it's an overcomplication when there's a lot of really simple display physics. I don't like to see the industry set back by incorrect estimates, so it is in both my hobbyist-interest AND business-interests to see correct science.
Head of Blur Busters - BlurBusters.com | TestUFO.com | Follow @BlurBusters on Twitter

I realize that it's still a pre-print (that means that the paper was not reviewed yet) and not a finished paper but the problem with the paper is not that it is complex. The problem is that it's just plainly bad. Basically, the result is not any better than a back-of-the-envelope calculation based on decades old data. The author does not make any attempt to verify the result by an experiment (which would be clearly feasible and very inexpensive by using a strobed display) or to compare it to other published data. Furthermore, it is not obviously clear which figures are original work of the author in this paper and which are taken from other works. This should be clearly marked in figures or in their captions not only mentioned somewhere in the text. And it needs to be done even if one uses his own figures from previous papers.

If the author is respected in his field, I would expect that he can do much better than this. I guess that the paper is still in the review process so there is an opportunity to improve.
Top

MCLV wrote: ↑
30 Apr 2021, 01:37
If the author is respected in his field, I would expect that he can do much better than this. I guess that the paper is still in the review process so there is an opportunity to improve.

I am currently reaching out to the author, Scott Daly.

EDIT: I've reached out, and he's acknowledged the receipt of my emails.

Even some of us think 120fps HFR is a joke -- 1000fps Ultra HFR is where the long-term HFR future lies.
Head of Blur Busters - BlurBusters.com | TestUFO.com | Follow @BlurBusters on Twitter

Chief: I'm glad you're reaching out. MCLV: I'll check out your post.

I dug into the most contemporary motion science research and am seeing things closer to what Mark is expecting:

These interactions can be described using simple log-linear models, and characterized using the temporal aliasing visibility
function, where maximum critical frame rates up to 1500 Hz are predicted.

(This is behind a paywall. I paid for a copy. Happy to share.)

I don't see the Daly paper citing this one.

Generally, I found the paper above to be really illuminating, introducing this novice, part-time motion enthusiast to concepts like motion smear vs motion blur:


Even though the gaps between samples may be imperceptible, there may still be stimulus degradations caused
by visual persistence. The perception of the stimulus being smeared spatially (motion smear) may be apparent if the
multiple images overlap and increase the perceived width of the stimulus. This is distinct from motion blur, which is caused
by the convolution of a signal with an exposure (such as a camera or the human eye), and typically exhibits a Gaussian edge
profile.

One thing that is clear is that researchers like David Bull are focused more on advancing motion science and less so on advancing displays as evidenced here:

"The scope of related previous research has typically been restricted by limitations in the experimental setup. The use of displays restricts the range of frame rates that can be tested, and concessions typically have to made regarding spatial resolution, bit-depth, luminance, and contrast ratio. This can make it difficult to uncouple the interactions and effects of these variables. We address this issue with a strobe light and a rotating stimulus that can be controlled at high precision using a stepper motor."
Top

By the way, I think that I have found a quite simple and cheap method how to roughly determine critical refresh rate. First results suggest that ~1300 Hz is not enough but ~1900 Hz might be (at least in the tested case). I need to improve my tools a little bit and collect more points before I will able to make a stronger statement.
Top

I dug into the most contemporary motion science research and am seeing things closer to what Mark is expecting:

1500-2000 Hz is probably a good approximate retina refresh rate for possibly that specific experimental display. They're much more in the correct ballpark.

But I bet the number will go up dramatically if resolution(focus) and FOV increases.
Head of Blur Busters - BlurBusters.com | TestUFO.com | Follow @BlurBusters on Twitter

MCLV wrote: ↑
13 May 2021, 12:45
By the way, I think that I have found a quite simple and cheap method how to roughly determine critical refresh rate. First results suggest that ~1300 Hz is not enough but ~1900 Hz might be (at least in the tested case). I need to improve my tools a little bit and collect more points before I will able to make a stronger statement.

An Arduino blinking micro LED (a pinpoint of LED) spininning on a fan blade is a good test.

Persistence-of-vision screens work on this principle. Even 100,000 Hz+ can be made human-visible this way.

But for a full frame refresh display, it is not necessary to reach such rates (unless you want the screen to successfully exactly simulate that persistence-of-vision display).