So what refresh rate do I need? [Analysis] [very good one!]

Chief Blur Buster wrote: Conclusion/TLDR:
- Scanning creates tilt effect on motion perpendicular to scan direction;
- CRTs and non-strobed LCD will have the scan tilting effect;
- Higher refresh rates / faster scanning will have less tilting effect;
- LightBoost (and similar strobe backlights) will not have the scan tilting effect;
- Multiscanning will create stationary tear-line artifacts;
- Interlacing will create venetian blind artifacts;
- Anything other than all-at-once presentation can cause motion distortions, in one form or another;
- Sequential scanning is the least-distorting method of scanning, short of doing all-at-once presentation.

What you forgot to mention is input lag variation - input lag at the top of the screen will be lower then at the bottom.
Of course you could race the beam (rendering each scanline seperately) or use continuous predictive time warp with eye-tracking, but these come with big drawbacks.

As input lag variation (not total lag) and visual instability cause nausea among other issues, it is preferable to do away with raster-scan altogether and use simultaneous refresh- what Valve called 'global display', using their custom made display drivers for their latest VR prototype.
Side note: To do this, you need to need to pre-buffer the image, but at maximum scanout speed with variable v-blank (think g-sync), lateny can be reduced to non-problematic levels.

Our prototype uses global display, where all pixelsare illuminated simultaneously. This avoids the
compression, stretching, and tilting problems that can occur with the more standard rolling display,
where pixels are illuminated in a scanned sequence over the course of a frame. It may be that the
artifacts of rolling display can be largely corrected by adjusting the frame buffer during each frame to
account for eye motion, but that’s not yet proven; also, while head motion can often be used as a
proxy for eye motion, without eye tracking there will always be failure cases, and low-latency headmounted eye tracking is not a solved problem. So right now global display is the only approach known
to work.

ScepticMatt wrote:What you forgot to mention is input lag variation - input lag at the top of the screen will be lower then at the bottom.

Oh, I'm already familiar with that;

However, I have considered that to be information to be a new subtopic of this topic -- worthy of another huge bunch of diagrams. The Leo Bodnar input lag tester, for example, has multiple flashing squares, for top, center, and bottom, since they are different measurements relative to the beginning of the scan. LightBoost is known to have a bit more input lag precisely because of this; the top edge of screen has a full frame more lag, the center of screen has half a frame of lag, and the bottom has virtually no lag delta. This is because of the delayed presentation of the top/center since it's scanned in the dark and then the whole screen is flashed at once after the scan hits the bottom and the LCD pixels have essentially finished transitioning (GtG).

There are also hard-to-understand input lag interactions with VSYNC OFF for framebuffered architectures, that required diagrammed explaining, like simplified illustration of input lag of different parts of the screen during VSYNC OFF at 240fps @ 120Hz, which I'll quote here for completeness' sake:

Explaining input lag of different parts of the screen during VSYNC OFF is kind of complicated, due to a lot of variables.

Generally speaking,
- Whether VSYNC ON, VSYNC OFF, or GSYNC -- all monitors are still doing top-to-bottom scanning (as seen in high speed video)
- During VSYNC ON and VSYNC OFF, the timing of the scans are synchronous (e.g. exactly 60 times a second, 1/60sec apart)
- During GSYNC, the timing of the scans are asynchronous (e.g. occurs when the GPU finishes rendering a frame)
- During all modes, the amount of time a scan takes place is constant (e.g. scans occurs from top-to-bottom at constant velocity)
- During VSYNC OFF, the input lag above the tearline is always higher than the input lag below the tearline. This skews the timings a bit.
- During strobing, you've got all-at-once presentation (regardless of the monitor mode, VSYNC ON or VSYNC OFF) because the monitor was scanned in the dark but then flashed all at once. This can skew the time-basis of the presentation timing of the slices of refreshes during VSYNC OFF. (This can affect responsiveness)

During a theoretical infinite framerate VSYNC OFF on an instant-response monitor (e.g. CRT), you're always real-time at the position of the scan line, you've eliminated tearing, and you've got minimum possible input lag by having the freshest possible input. You still only get a discrete number of samples per second for each pixel, but whenever that pixel is displayed, its input lag would be very fresh.

Explaining all of this very well, requires a very well-written article, which Blur Busters plans to do after all the important monitor reviews are done. But I will be happy to dive into small morsels at a time (even these takes a lot of explaining).

A picture is worth a thousand words, so here is one I've created just now: In real life, the tearlines will be all over the place, as 240fps often won't be perfectly synchronized with 120fps. However, this simplified diagram gives you a taste of the complexity of input lag during VSYNC OFF situations. There are other variables left out, such as excluding cable lag and pixel transition lag, but this gives the correct general idea, and also additionally, helps explains why input lag continues to go down even as framerates go higher and higher above your refresh rate.

Hmm, I didn't realize that light-boost display scann out 'in the dark'. Very nice.
Top

All strobe backlight monitors essentially behave as global displays (LightBoost, ULMB, Turbo240, BENQ Blur Reduction) as they scan the LCD panel in the dark (unseen by eyes), and then flash the backlight all at once at the end. The transitions (GtG) is unseen by eyes, and motion blur now controlled by strobe length, and latency is consistent relative to GPU frame buffers (during VSYNC ON operation)

Global displays (Displays that present all-at-once) always has more input lag than scanned displays, because of the finite video signal transmission speed from the computer to the display. All-at-once presentation requires buffering (or scanning in dark) before visual presentation. While sequential scanning displays can take advantage of this by real-time scanning-out. However, for framebuffered architectures and VSYNC ON operation, global displays have the least input lag variations, for situations where latency variations are a problem, and you need the most perfect motion possible (framerate == refreshrate synchronized motion without tearing, e.g. capped-out VSYNC ON).

Also, some of these displays (e.g. LightBoost) actually does some partial buffering and then does an accelerated scan-out. This is in order to create a longer pause between refresh cycles, to allow LCD pixel transitions (GtG) to be more complete, before flashing the strobe backlight. (See the "How it Works" section at http://display-corner.epfl.ch/index.php/LightBoost ...). So LightBoost effectively, behaves as a global display, to the human eye.

Scanning may still be needed for some architectures such as OLED, since they are scanned displays, and rolling-scans is a low-latency method of low persistence from OLED. Fast scanning (e.g. refreshing a display in 1/1000sec) can also make skew/compress effects negligible, as near-instantaneous scanning start to resemble a global display more and more.

Did You Know? VSYNC ON wasn't always evil. Old games such as Super Mario Brothers and Street Fighter were always VSYNC ON. The classic 8-bit and 16-bit era nearly always operated synchronized to refresh rate (VSYNC ON), all the way back to the Atari 2600 systems which was by its nature, graphics always synchronized to refresh since everything had to be done in realtime as there was almost no memory. We never complained about input lag for those games. But as latency increased with 3D rendering and framebuffered architectures, VSYNC ON became evil in input lag. However, as we hit 120fps and beyond (240fps @ 240Hz on future displays), VSYNC ON latency becomes less and less, and should hopefully become acceptable again.
Head of Blur Busters - BlurBusters.com | TestUFO.com | Follow @BlurBusters on Twitter

I don't know about competitive gamers, but there are performance tests of input devices standardized in ISO 9241-400 (formerly ISO 9241-9)
examples: http://www.cse.yorku.ca/~rteather/pdfs/3dui09.pdf
http://www.cas.mcmaster.ca/~teather/pdfs/3dui11.pdf

i can attest to this, its purely muscle memory. for example the drag from a dirty or sweaty mousepad will trow my aim off, if its 100% smooth i can easly snap without even thinking about it. atm im using a teflon based mousepad and added a custom ptfe skate to the mouse. i find the default mini skates mouses come with gather sticky dirt which trows me of by a lot

this looks rather getho, but i be damned if the drag is smooth and even all across the mousepad

A good post from a separate thread, but since I've tweeted/blogged about this thread, I'm including a copy here for completeness' sake:

ScepticMatt wrote:What is temporal aliasing and why is it a problem?

Due to the time-discrete nature of our displays, transformation speeds (movement, rotation) less then half the frame rate causes false detail. For example, a wheel rotating at 120 Hz filmed by a 24Hz camera with very low exposure duration speeds appear static, when they should be blurred ('wagon-wheel effect). Without motion blur, computer generated images show aliasing even at 10,000 frames per second. Therefore, computer graphics have to simulate motion blur to reduce it. 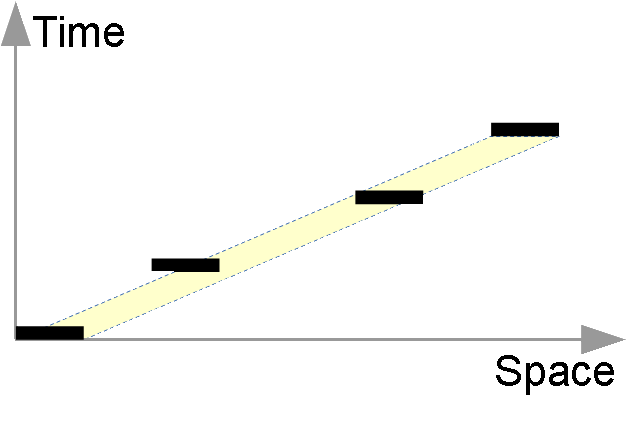 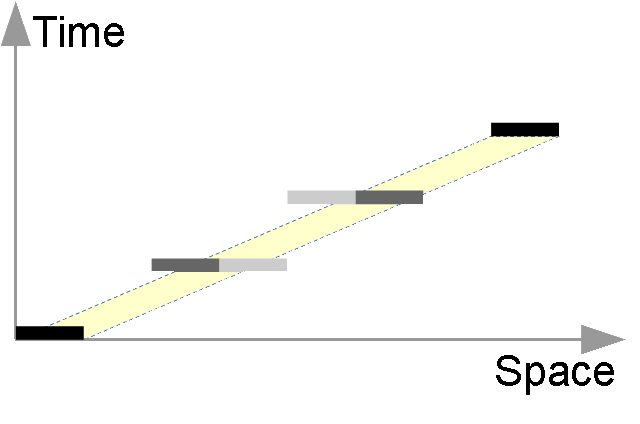 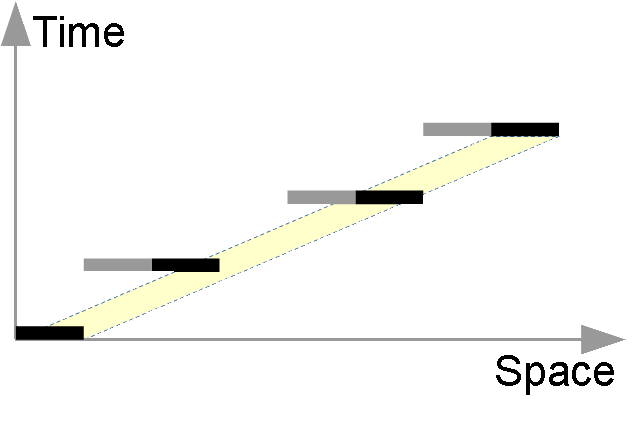 A combined approach is needed. 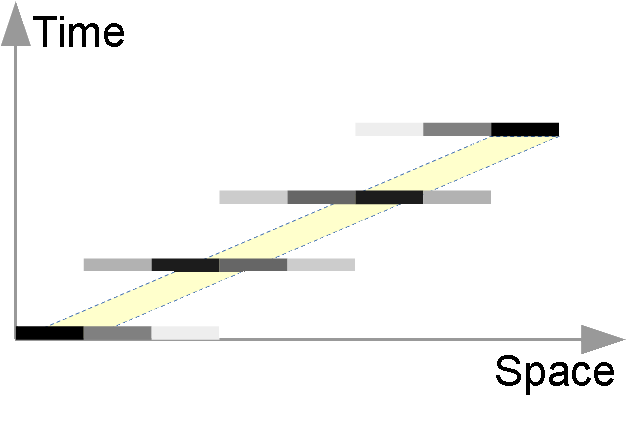 Example 2: Eye tracking:
Eye tracking needs to be accounted for, especially when the screen has a large FoV, such as head mounted displays. Same setup as Example 1 with motion blur, but now our eyes track the movement of the pixel. Pixel movement is blurred, but should be sharp. Display-static objects have an apparent motion of 233 pixels per second from right to left and suffer from stroboscopic effects. 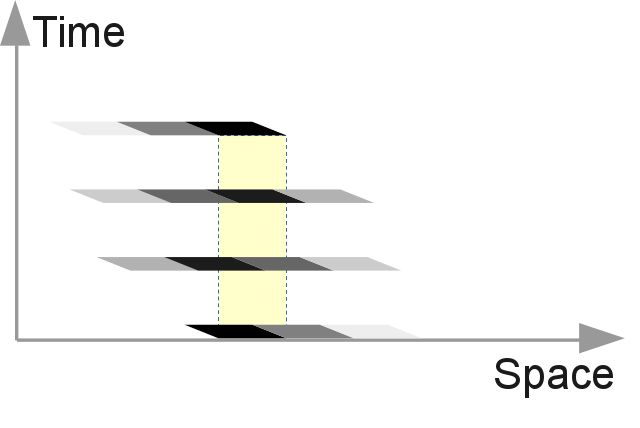 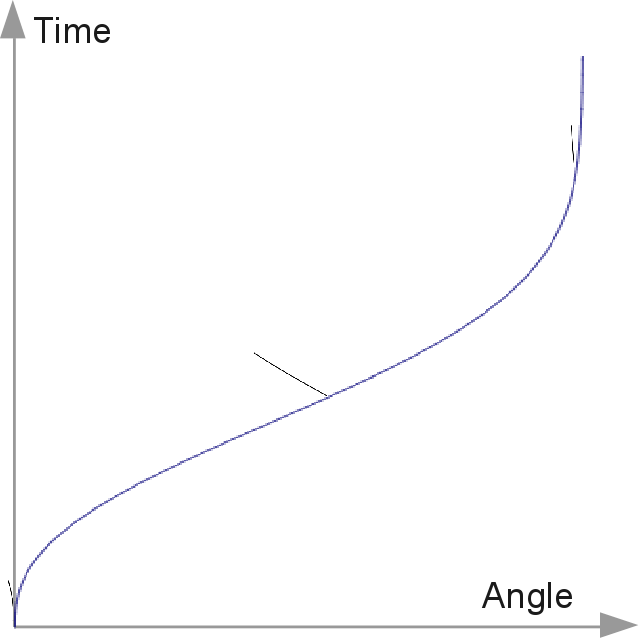 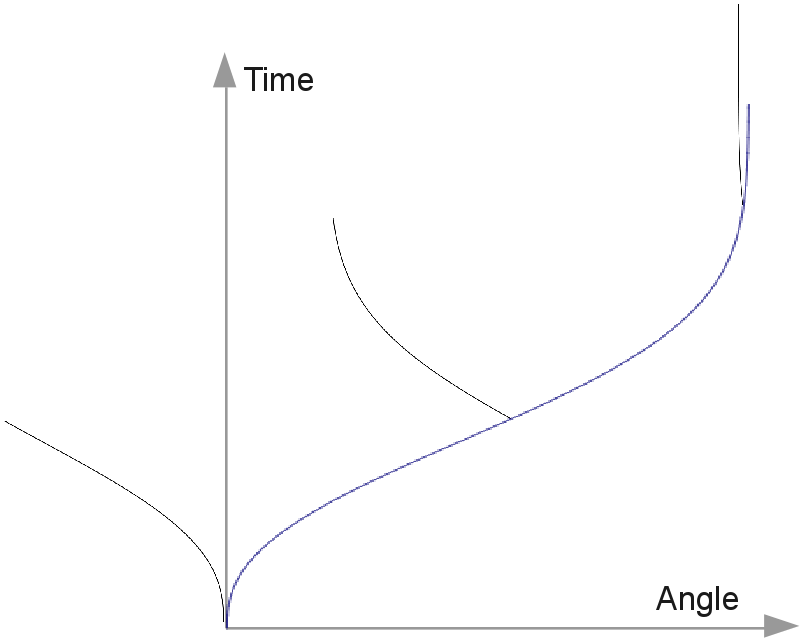 Conclusion:
Time discrete rendering causes temporal aliasing. As resolutions increase, impractical frame rates are necessary to avoid it. Spatio-temporal anti-aliasing can converge to an ideal solution, thus eliminating the need for higher frame rates (beyond flicker fusion), but eye movements need to be accounted for.

Limitations:
In practice it isn't possible to deal with temporal and spatial aliasing separately and achieve 'perfect' motion blur. See:
Shinya et al. 1993 / Spatial Anti-aliasing for Animation Sequences with Spatio-temporal Filtering
Fast eye-tracking system is still an unsolved problem for head-mounted displays.
Furthermore, as seen in example 3, the complex relationship between the human visual system and object motion is still an active area of research, and can improve effectiveness and efficiency of motion blur rendering techniques.

Can you edit the above when I've fixed the images?
Top

ScepticMatt wrote:Can you edit the above when I've fixed the images?

Yes, I can -- (or if you repost so it's under your name for future editing, and then I can delete my copy)
Head of Blur Busters - BlurBusters.com | TestUFO.com | Follow @BlurBusters on Twitter

Should be fixed now - it ended up being more complicated because eye velocity during saccades isn't constant.
Top