Varies. Between ~0.1ms and 2.5ms. Almost half of the monitors I'm getting are adjustable-length, where you can decide the brightness-vs-clarity tradeoff. NVIDIA ULMB Pulse Length can adjust to <0.25ms albiet at huge lumen loss.

Some are voltage boosted (i.e. the smaller 25" 240Hz TN panels), the voltage-boosted strobe backlights to milk the Talbot-Plateau Law better, to raise "nits-per-millisecond" higher. Where thanks to voltage boosting, you get 400-500 nits full persistence may maintain 200 nits strobed 1ms, and still give you 100 nits at 0.5ms (via adjusting the strobe length in the menus. Factory Menu on BenQs and main menu on NVIDIA ULMB). At least a few manage 300 nits at equivalent "LightBoost 10%" nowadays.

Also keep in mind that inversion-artifact-free crosstalk-free 1ms looks much better than inversion-roughened crosstalky 0.5ms (especially when combined with grainy-colors interactions with 6bit FRC), so cannot discount the artifacts that are part of the package.

Also, while phosphor rise is nanoseconds, phosphor fall takes far longer -- often milliseconds. At high brightness, the fade-to-90% on many CRTs can take more than 1ms. Not the fastest CRTs obviously. It's not squarewave like LCD strobing. So it's not apples-vs-apples. But effective "strobe length" of a CRT isn't that small on medium-persistence phosphors like those on FW900, which isn't the fastest-phosphor CRT, so that's quite an easy one for a top-10%-ile strobing to beat.


flood wrote:as long as you have a graphics driver installed, the cursor's position is set during vblank. so the cursor has less latency at the top than at the bottom. i've asked people many times whether they can feel the difference in latency between the cursor at the top of the screen and bottom of the screen. (which is like 15ms for 60Hz... quite a lot). i'm not sure i've gotten any positive responses lol. part of it is that you get used to it.

At lower Hz (60Hz), it is probably noticeable if you really pay attention, especially if you try to drag the mouse cursor back-and-fourth on the bounce at http://www.testufo.com/scanskew -- try it! Drag mouse left and right to make arrow follow the bounce at the top, versus at the bottom. Then I can notice the subtle difference. Nearly all 60Hz LCD panels, this is an easy test.

Now, don't try this on older 240Hz monitors, or older 1440p 144Hz monitors because the older 1080p 240Hz panels and the older 1440p 144Hz panels, are fixed horizontal scanrate TCONs. Scanrate converting internally unlike http://www.testufo.com/scanout ... They accept a slow-scaning 60Hz signal to output to a fast-scanning 1/240sec scanout. Latency gradient distortion layered on all of this, which will interfere with your ability to detect the mouse cursor-vs-scanout latency.

Oh, and the latency gradient can create microstutter mechanics. VSYNC OFF microstuttering is slightly worse on 100Hz ULMB than 100Hz CRT because of the weird latency gradient, as it skews gametime:photontime relativeness. That's part of why I advocate low-latency VSYNC ON methods with a strobe backlight; so much better, and can get the perfect gametime:photontime sync (if your game runs fps=Hz) for all pixels on the screen simultaneously. CRT tweaking has its own tweaking community, and strobe tweaking has its own strobe tweaking community, different animals.

So many people who try to tweak a strobe backlight without understanding how to tweak it for best (hertzroom, large VBIs, cherrypick the right panel with bright low-artifact strobing, steer towards fps=Hz and "VSYNC ON-like" sync technologies, and a few other recommendations). But if you cherrypick it, it's not hard to blow away a FW900 in motion clarity (noticeably less motion blur) if you're comparing VSYNC ON versus VSYNC ON, rather than VSYNC OFF versus VSYNC OFF.
Head of Blur Busters - BlurBusters.com | TestUFO.com | Follow @BlurBusters on Twitter

i don't mean when dragging something around, but just like the motion of a cursor by itself.

crt phosphors aren't charcterized by a single timescale for decay.
but anyway, as a point of reference, on fw900 i can easily see 1 pixel details on testufo for the ufo moving at 960px/s
Top

flood wrote:i don't mean when dragging something around, but just like the motion of a cursor by itself.

In passing I already mention that (see the TestUFO scanskew paragraph), did you try that "follow the algorithmic bouncing line with your mouse cursor"? Do you notice?

I did notice the top/bottom lag differential, but only with that test, and only just barely (at 60Hz on a 60hz monitor)

If the algorithmic sine-wave bounce is too fast, configure the TestUFO Scan Skew speed to "Slow" rather than "Default". If your mouse pointer is too jumpy, clean mouse feet, raise pollrate to 1000Hz, and find a smoother mousepad. It's easier to notice if you eliminate your mouse accuracy weak links.

Right, it's not squarewave.


flood wrote:but anyway, as a point of reference, on fw900 i can easily see 1 pixel details on testufo for the ufo moving at 960px/s

On several cherrypicked strobed LCD screens adjusted to lower pulse lengths -- I can still read the street name labels in TestUFO Panning Map Test at 3000 pixels/sec. At these speeds, I can still eyetrack.

For in-game benefits, to get TestUFO-smooth mouseturns in FPS games, one needs to also optimize the mouse to 1600dpi or more + low ingame sensitivity + clean mouse feet + good high-rez mousepad + good sensor. That way, mouse turn left/mouse slowly is smooth stepfree (unlike at 400dpi), without interfering with your pre-existing flick-turn performance. Then you can mouseturn TestUFO-smooth at 960pps or 1920pps, when using raised mouse DPI's. With enough optimization your mouseturns more identical in smoothness to gamepad/keyboard turns/strafes. Avoid the poorer quality sensors, erratic mousepads/mousefeet, etc. Then it's easier to see benefits of 0.5ms MPRT vs 1.0ms MPRT (I can see the difference).

Right now, the only adjustable-strobe-length strobed high-Hz 4K display I have here, is the Zisworks display at the moment, though it gets fairly dim at 0.25ms MPRT. But it was enough to tell me that I can still human-detect 0.25ms MPRT versus 0.5ms MPRT in the TestUFO Panning Map Test at extreme speeds -- you need roughly 5760 pixels/sec to tell the difference between 0.25ms strobe and 0.5ms strobe -- this is too fast for 1080p but fine for eye tracking at 4K.

Whac-a-mole of the weak links (preventing you from seeing 0.25ms vs 0.5ms strobe flash length) include a lot of components that also include the mouse. The mouse is a rather severe weak link, as anything that introduces microstutters (not using VSYNC ON) which is also a microstutter weak link too (microstutters hides 0.25ms-vs-0.5ms MPRT benefits). That means ultrahigh DPI for your mouse (rather than the usual 400dpi) while lowering in-game sensitivity to compensate, but at that point you also need sensor/feet/pad/etc to keep up too (cherrypicked mouse, mousepad, etc).

Obviously VSYNC ON is avoided because of the lag, but developers are reducing VSYNC ON latency quite a bit for virtual reality games (which pretty much demands VSYNC ON).

Easier goal is 1440p strobed, as 4K 120fps strobed is quite hard for a GPU to keep up. For better/brighter/quality strobing, you have to back down all the way to 1080p strobing, on a well-tuned 1ms TN or 1ms IPS panel. But technological improvement will keep progressing (4K high-Hz becoming cheaper in future) -- and that shorter strobe lengths are still useful (<0.5ms still beneficial) if you can cram enough lumens in it & solve all other weak links & stick to games capable of "framerate=Hz".
Head of Blur Busters - BlurBusters.com | TestUFO.com | Follow @BlurBusters on Twitter

i can't figure out what scanskew is doing; i'm not too interested at the moment.

of course it's easy to see the lag of the cursor: use a noncompositing window manager (i.e. such that dragging windows around has tearing) and see how the cursor can lag behind objects you drag around

but if you're not dragging something around and just staring at the cursor on a static background, it is harder to distinguish. that's all i meant

Right, it's not squarewave.

i don't just mean that it's not square wave.
i mean that the amount of phosphor ghosting can be unrelated to the speed of initial decay

which means there is a long faint tail, even though details can still be sharply resolved


for reference:
on my fw900, 1280x800@120Hz
i can barely eye-track at 1920px/s
text is just as sharp on the moving map as if i pause it, but it's hard to read because my eyes catch the motion only for a brief moment.
on ghosting/pursuit camera, i can see the eyeballs and all pixel-sized features of the ufo at 1920px/s completely clearly.
to achieve this on strobed lcd requires <=0.5ms persistence.
Top

flood wrote:i can't figure out what scanskew is doing.

Scan Skew purpose is not to measure mouse cursor latency, I was just using this test to make it easier for me to feel the mouse cursor latency difference between top edge and bottom edge. It's a fixed sinewave bounce. I was just using it as an easy point of reference for something that doesn't follow the cursor but to do vice versa (i.e. intentionally following motion with cursor). Test was chosen for convenience's sake. The real purpose of this was designed for a different purpose than for this, which is actually more interesting to understand:

The tilting is the visual latency difference between top and bottom -- caused by the non-global refresh of the screen, so it skews because the screen is refreshing top-to-bottom. As your eyes tracks sideways, the bottom edge refreshes later after the top edge -- creating the resulting visual skew. This has always happened on all sequential-scan displays CRTs and LCDs running framerate=Hz. Most don't notice except in tests designed to amplify visibility of this.

The skewing on www.testufo.com/scanskew is human-visible on sequential-scan displays at lower refresh rates (CRT and LCD) but invisible on global-refresh displays (strobing, DLP, plasma etc). If you double Hz on sequential-scan, the skew goes half-angle. So the skew is harder to see at 120Hz than at 60Hz.

At www.testufo.com/scanskew -- you can see the skewing appear/disappear whenever you turn on/off ULMB on a strobe-backlight LCD -- which is very scientifically very interesting.

You can also witness this with window-dragging on a common native-60Hz LCD display. Like a DELL or HP monitor at any office. Drag a window left and right (at approximately 1000 pixels/sec) while eye-tracking the window. The windows becomes parallelograms while it's being dragged!

Once seen, you cannot unsee it. Much like being trained to detect 3:2 pulldown or other artifact.

Yes, that's certainly true --
And another effect; even if the trailing edges start to blur, the leading edge remains really sharp.


flood wrote:dam i wish i could still see these images:

Damn, don't you hate it when imagehosts go out of biz. You can use Blur Busters Forums to imagehost, via the Upload Attachment feature, too.
Head of Blur Busters - BlurBusters.com | TestUFO.com | Follow @BlurBusters on Twitter 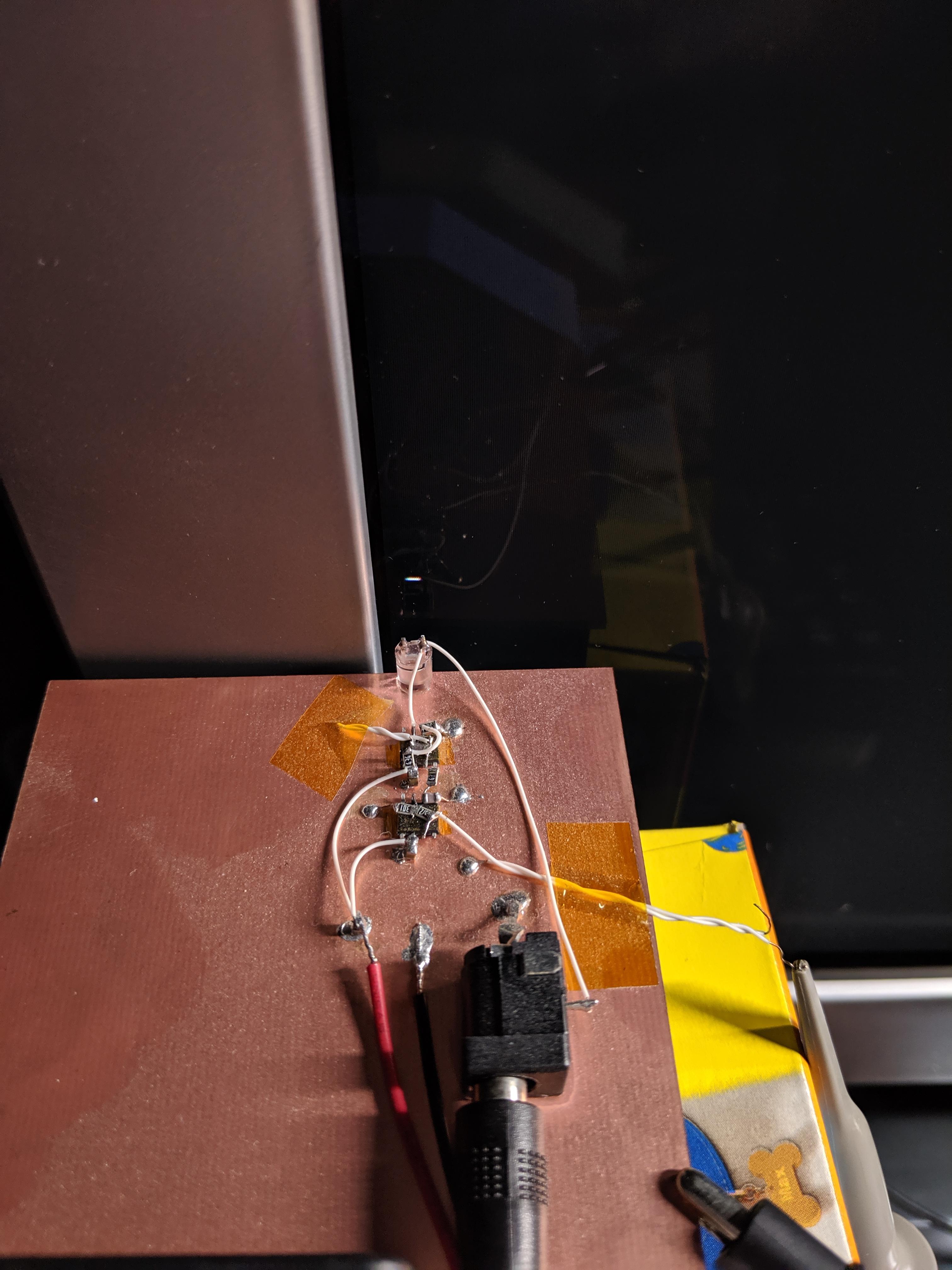 covered in a box to shield some radiation that it's picking up from the crt (the wiggles every 12us). not perfect but helps somewhat 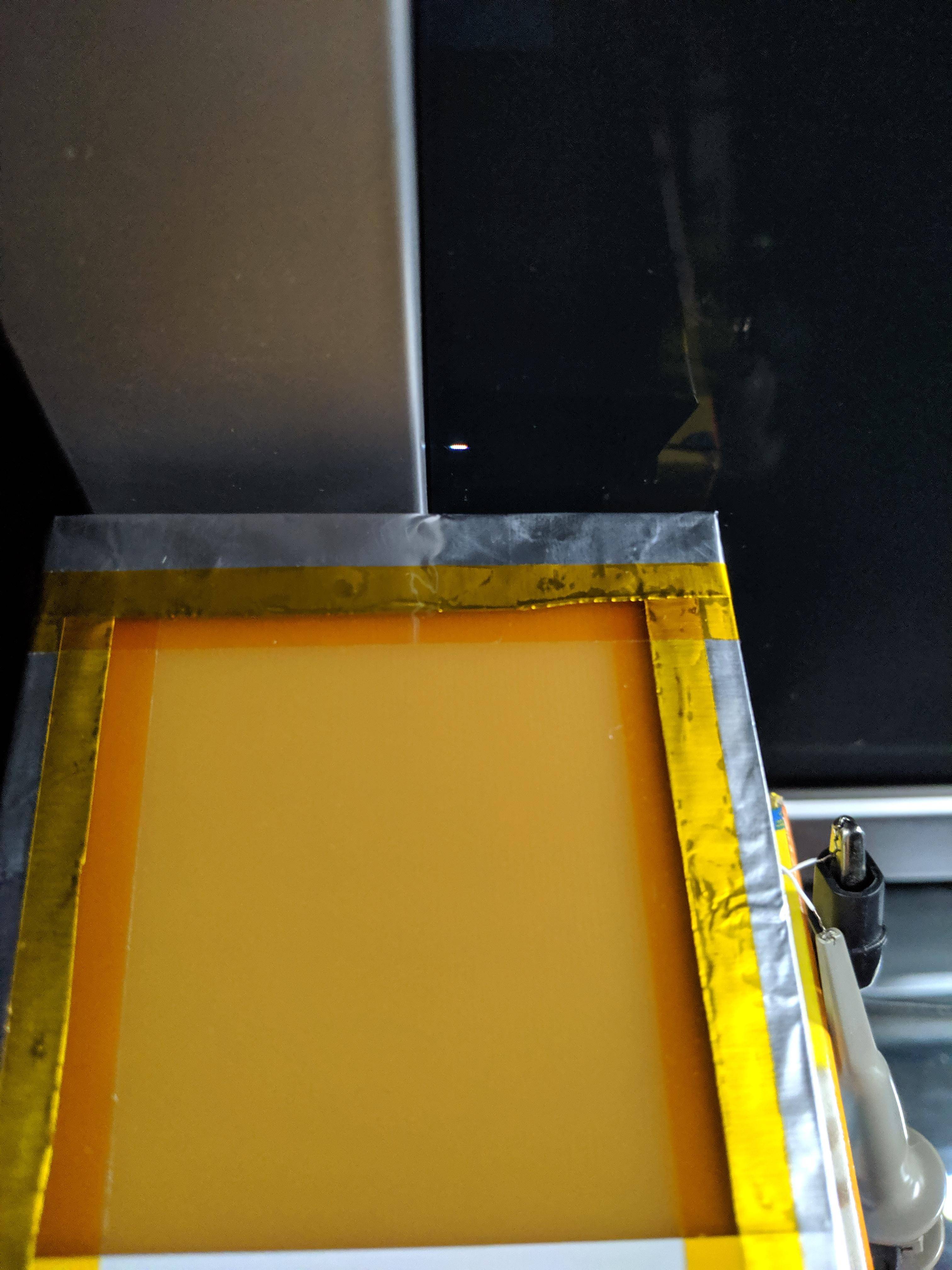 this is the response to 5 (white) pixels. video bandwidth is 146.88MHz so 5 pixels = 34ns of signal.
the bandwidth of my amplified photodiode setup corresponds to a rise/fall time of around 1us, so 34ns is essentially an instant impulse 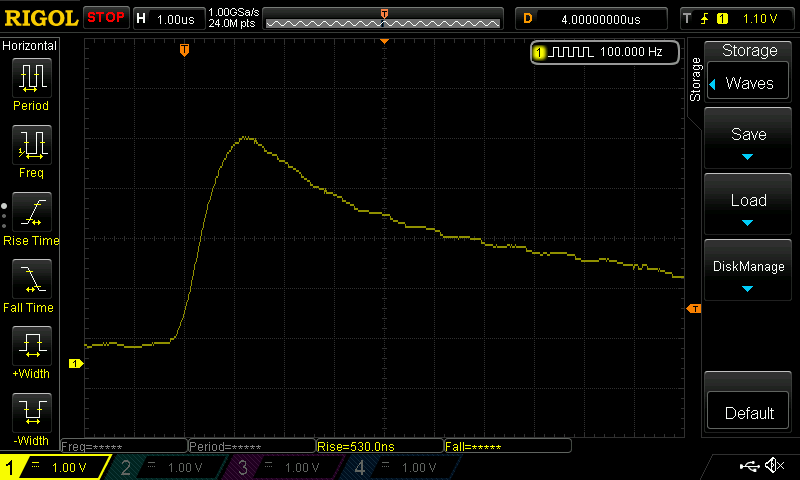 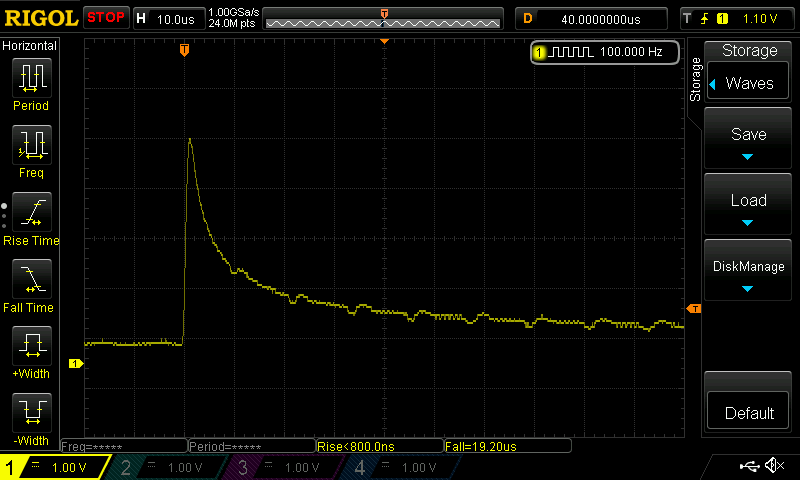 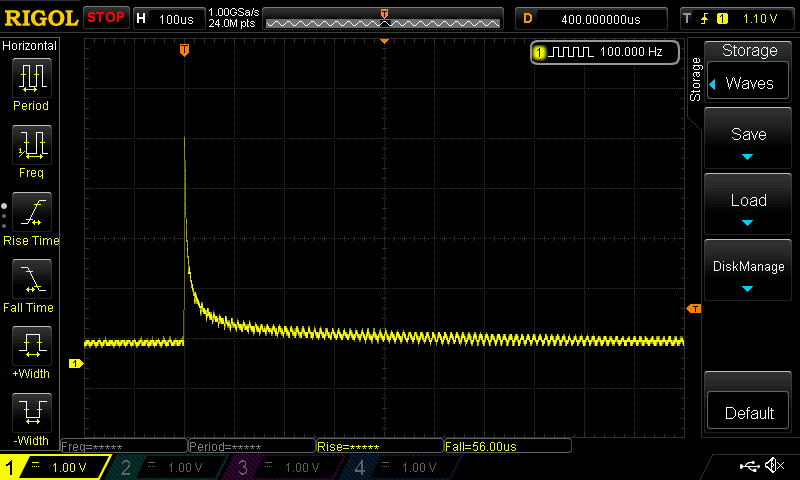 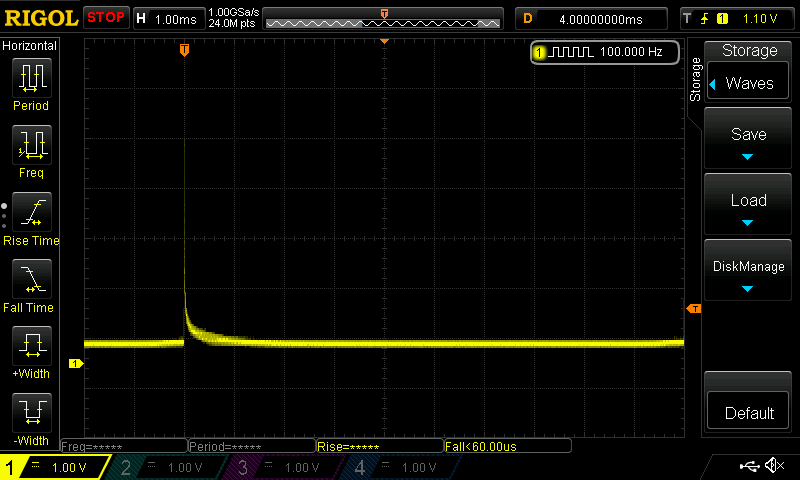 hard to say but i think it dumps most of its energy in the first 0.2ms or so.
Top

it's all battery powered. no switching noise.

Just wanted to say, that i have the phosphor ghosting on my CRT monitor (white trail of the mouse cursor over black background), it thought it was not a common issue

Also, if delivery prices from Russia are not too expensive (i bet they are but...) maybe you ( Chief Blur Buster ) could buy one of these FW900 that 1000WATT has seen for sale on his city. I guess i'll be abit annoying but just in case you can't find anything better (i am interested on seeing your results with it