Sorry if this is in the wrong place I wasn't sure where to put this. I have a Sony xbr55x900e (UHD sony bravia 55") tv that is use with my pc. I am able to run 4k@60hz but also 1080p@120hz and it passes all the frame skipping tests. I was also able to get 1440p@120hz work as well using CVT reduced blanking which is quite nice. Recently though I thought it might be nice to try something between this and 4k@60hz so tried 3000x1800@96hz which seemingly works, but I did the frame skipping test and noticed that every fourth box seemed brighter, and I'm not sure if this is caused by my camera or something as 1080p and 1440p running at 120hz all seemed to have uniform brightness in the test. I'll include the picture of the test I took a few at different shutter speeds, but they all seemed to show this fourth frame brighter thing this picture I think was at 1/2 shutter. I suppose I should add that I don't see any visible flickering of any kind when on this resolution.
Ps. I guess I captured my foot enjoy 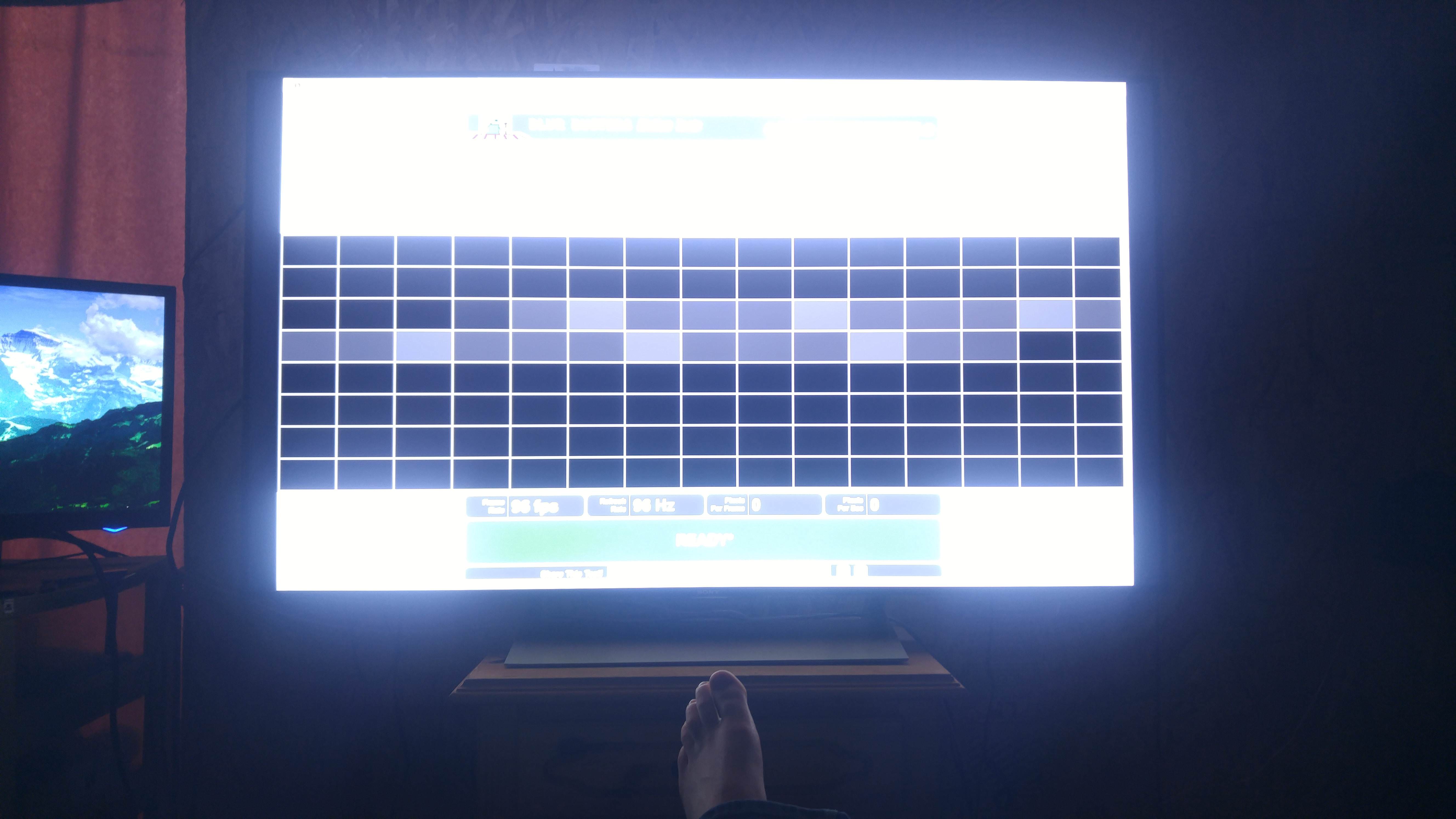 You seem to be getting frame duplication instead of frame skipping. Not sure how, it's weird. But, the photo is the proof, so it's happening.

(It's frame duplication because if a frame is shown twice, the square that's lit in that frame is shown for twice as long as the neighboring squares, and thus will be twice as bright.)
Steam • GitHub • Stack Overflow • Twitter
The views and opinions expressed in my posts are my own and do not necessarily reflect the official policy or position of Blur Busters.
Top

Ok, that makes sense actually, I'm also not sure how it's happening but when I did the eye-tracking test I noticed that it appeared to be almost a little shaky. It's definitely not as smooth as 60hz or 120hz on this display. Is there any way to determine the cause or to maybe make it work? I could try lowering the refresh a bit I suppose, since it's a resolution intended for games shouldn't matter if it's not a multiple of 24 or something like that.
Top

Could it be that the screen is flickering the backlight and you're just getting bright spots when 24hz pulsing is lining up with the 96hz display?

I mean that is possible as it is every fourth frame I guess. I'm honestly not sure how I would test this though. However the other working resolutions don't have that bright of a frame ever, but I could try some other refresh rates.

edit* Tried again but went for 100hz which "worked" again but when i check frame skipping test, now it's every fifth square that lights up. Go figure.
Top

Hm. I didn't pay attention and didn't realize it'a a TV. So strobing could be a thing here.

If you take a video of the screen, it's easy to see whether it's strobing or not. Usually you don't have to record even, just the preview on your camera's screen should show weird flicker and/or an unstable image.
Steam • GitHub • Stack Overflow • Twitter
The views and opinions expressed in my posts are my own and do not necessarily reflect the official policy or position of Blur Busters.
Top

Well I don't see any noticeable flicker with it on, but when I closely look at images they almost seem to move side to side a bit, it's hard to describe but I suppose unstable image is maybe accurate? I suppose it wasn't meant to be, also I realized I should have been using 3200x1800 *derp* for 16/9 ratio but that didn't fix anything the effect was still there. Weirder still, trying any refresh rate under 96hz seems to confuse the upscaler in the TV leaving a black border around a 3200x1800 pixel rectangle in the centre of the screen. I'm not completely sure though it could be strobing, but it's not obvious at all even with a video.
Top

So I took another picture and I noticed something. One of the fourth boxes wasn't brighter in the shot, but I noticed it was only on the last box that was lit up. This to me makes me think the frame duplication makes sense as it only played that frame once, then the camera finished the shot before it lit up again brightening that square, so it remained normal brightness. Weird stuff at a substandard resolution. I guess I shouldn't be surprised.
Top

I've seen this happen before, it's caused by refresh cycles being repeated (displayed twice as long).

Either way, effect is microstuttering in TestUFO. Better raise refresh rate to 120Hz or lower refresh rate to 60Hz to fix this. From what I'm seeing, I suspect your display already supports 120Hz because mapping 96Hz onto 120Hz creates a 1-in-4 bright square effect. Basically a "1-1-1-2" pulldown effect repeating every 4th refresh cycle, and 96 is exactly 4/5ths of 120.

So in theory, if we had a higher bandwidth HDMI connection, your display could do 4K120....If only the video cable could cram it into the display. I wonder if certain tricks such as forcing bitdepth to 4:2:0 (choose "YCbCr" in NVIDIA Control Panel) -- that will lower the HDMI bitrate and you might be able to reach 120Hz at a higher resolution.

Another trick is to try 4K120 interlaced. A hacky mode, but worth a try.

Your display appears to be resolution-multisync if it successfully scales odd modes like 1800p, so maybe it will sync to these other odd HDMI modes.

Hey, thanks a lot for your input and fixing the picture. I'm not really into having 4k@120 interlaced, I could test if you guys wanted though, but yeah hdmi2 is definitely bandwidth limited which is unfortunate. 1440p@120hz wouldn't work with normal timing either, I had to turn it to cvt reduced blanking. Since the tv is upscaling anyway it looks quite good for games I'm running at 120. Although I will say I am tempted by 4k@120hz if I could as that would remove and judder effects on 4k movies and such without having to have interpolation or something on. I think I'll just accept the current abilities of the display which by no means are awful. So I tried 1920x2160 and it worked I guess leaving black bars on both left and right sides, not sure if it was supposed to stretch or something? I mean the odd thing about 1800p is that literally any refresh other than 96 including 60 would cause the scaling to fail, and it would just show an 1800p box in the middle of the screen.

It is interesting though anything over 120hz shows clear frame skipping and things in between 60 and 120 seem to have this frame duplication thing. cest la vie
Top
Post Reply
10 posts • Page 1 of 1