Gave that a try, no luck using the methods below. 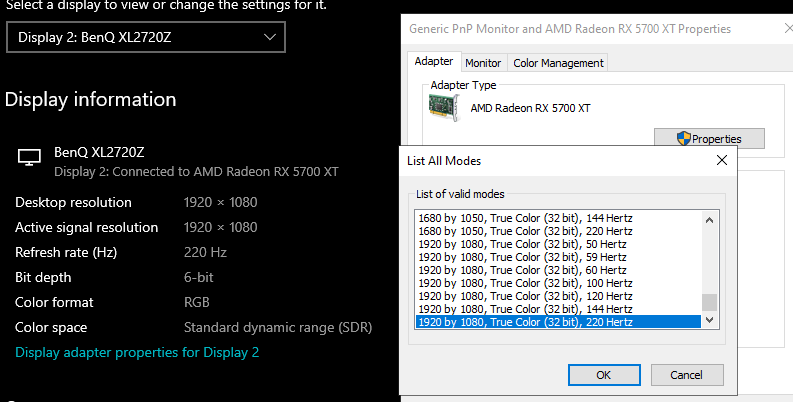 It's from 2017 and it's made in china. Am I supposed to update the firmware or something
Top

It's from 2017 and it's made in china. Am I supposed to update the firmware or something

I have the original 2720z so it may vary but mine had issues if I didn't manually change the "Total". If you don't have that set, give it a try as well: 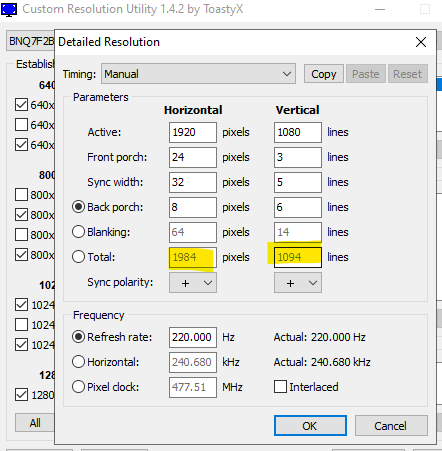 IMPORTANT: Older T-Series Will NOT work (all models older then XL2430T)

How come is this inaccurate information still being provided? I posted proof a while ago of a xl2420t running at 244hz without any frameskipping issues. As long as you keep the pixel clock below 330MHz (i believe this is a limitation of the monitor itself as there is no difference between the ports, with or without the pixel clock patcher) and keep the horizontal total below a certain value (around 1500 pixels), it seems to work just fine with a few visual quirks here and there. This is still very useful for people who play CS at lower and/or stretched resolutions. For instance, I can get 1350x1080p at 210hz and it still looks pretty decent for older games.

The limit appears to be at about ~264hz (directly on windows) and about 268hz on the OSD. It seems to vary randomly between 262hz-268hz on the OSD when setting it to 264hz. Up to 260hz it does not frameskip, but I'm not sure about higher. I tried setting firefox manually to 268hz (which was what the OSD was showing), but IDK if that is the correct thing to do in a case like this.

general information:
- Anything above 330MHz starts to look glitchy with artifacts, even with DP or patched DVI-DL

- For whatever reason, most resolutions only work above 200hz, which might be why people did not realize it worked on these older monitors. A few resolutions work below this value, I don't really remember which, I think the resolutions that do not bug the scaler work below 200hz, but the others glitch out the screen.

- Up until ~230hz it works fine, with the only bug being that the screen gets slightly "misplaced", with the last vertical lines of the right side appearing on the left side of the monitor. This does not seem to happen at certain resolutions such as 640x480 and 800x600, but it happens for most of the other ones (probably something to do with the natively supported resolutions by the scaler?).

- above ~230hz there is a chance the screen will go full white requiring a reset of the monitor. this seems to happen when there is too much black on the screen at once for more than a few seconds. The higher the hz, the lesser the tolerance in time. (apparently a protection against overvoltage? i recall reading something like this)

how do you unlock 16 color depth ? I think that unlocks some limits
Top

the timings you can find from your extension block works better, atleast for me. 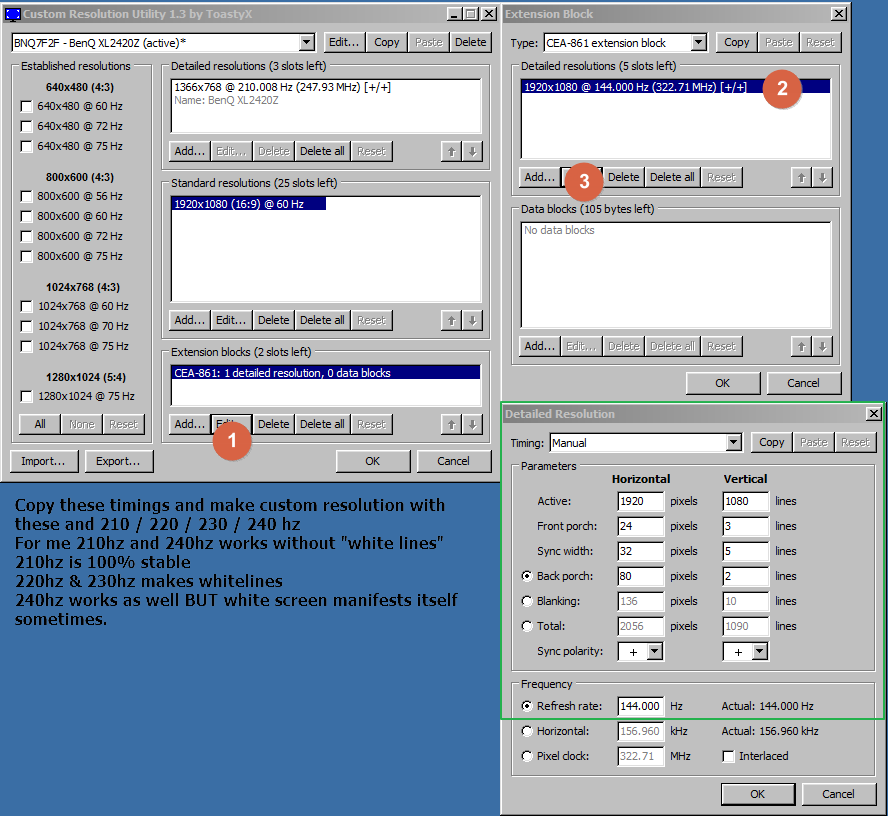 guide where I got these is below

hopefully this helps someone

info: for some reason windows 7 handles these overclocks better. With windows 10 you get worse colors.. if someone knows why this is please share!
Top

guide where I got these is below

hopefully this helps someone

info: for some reason windows 7 handles these overclocks better. With windows 10 you get worse colors.. if someone knows why this is please share!

However now the problem is 220hz depends on how great the total pixels and the resolution are. Which means 210hz can look stable only at 2056+ pixels but very glitchy at 1984. And I can't go over 210hz anyway because monitor gives no signal at 493+ pixel cock
Top

Has anyone tried this method on the xl2731? Because I’m considering getting it and it seems to have a scaler with a free sync module.
Top 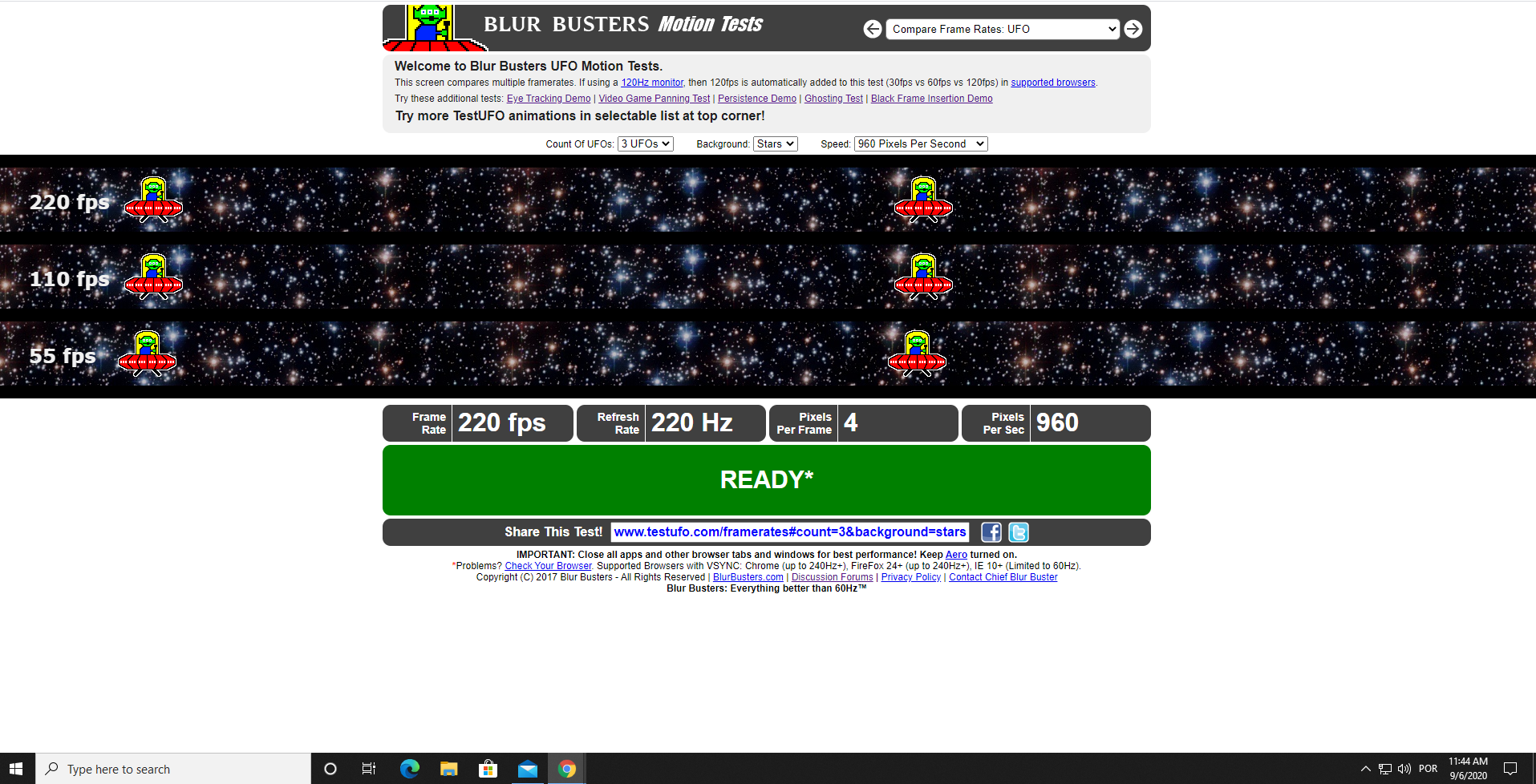