EeK wrote:@jorimt, thank you very much for taking the time to answer all of my questions. You've been incredibly helpful and patient, which I really appreciate. I've learned a lot from your articles and, now, even more from your posts.

Good to hear, any time @EeK

EeK wrote:P.S.: I'll be trying out that G-SYNC Indicator option! Had never noticed it until you pointed it out.

Oh, and by the way, this may end up being setup specific (I'm using Vulkan; it may not be occurring with DX12), and might ultimately be patched out, but I just installed RDR2 (I've been following the ResetEra performance thread, and I regularly follow the AVS Forum OLED thread, so I see you own it as well), and G-SYNC (I have a 144Hz monitor containing a module, using DisplayPort) is only working for me if I set in-game V-SYNC to "On."

Fullscreen optimizations enabled/disabled have no effect on this with in-game "Fullscreen" mode. I've also verified "Fullscreen" is not borderless/windowed.

Just thought it was worth a mention in this regard, and will be interesting to know if you're G-SYNC indicator shows with in-game V-SYNC "Off" (or not). Also it's a bit ironic, seeing as we've been discussing in-game vs. NVCP V-SYNC.

I will stress though, this occurrence is incredibly rare; it's the first time I've seen it happen since I can remember (and I own a lot of games).

EDIT: It was Vulkan. With DX12, whether the in-game V-SYNC option is on or off, or NVCP V-SYNC is on or off, G-SYNC functions regardless.
(jorimt: /jor-uhm-tee/)
Author: Blur Busters "G-SYNC 101" Series

A higher resolution will indeed always put more strain on your GPU. Use RTSS to monitor your GPU usage percentage.

Ideally, you want it to be below 99% usage for input lag purposes, but preventing V-SYNC input lag with an FPS limit below the refresh rate with G-SYNC (as you already have set), will net you the most input lag reduction (typically 2 or 3, but sometimes up to 6 frames in extreme instances) out of anything else you can do on the system/display side (Low Latency Mode, both "On" and "Ultra" will, at best, usually net you an additional 1 frame of input lag reduction in uncapped/GPU-bound situations).


a22o2 wrote:Right now I am using: 1440p in game, RTSS set to 160 (165hz monitor), NVCP: gsync on, vsync on, NULL set to ON instead of Ultra. Vsync off in game. Do you recommend these settings or anything different? Thank you!

edit: reading another member's post is giving me conflicting answers. In my specific case, null should be on or off?

Sound right to me, including NULL "On"...except for this game; it runs on DX12, and DX12/Vulkan currently handle the pre-rendered frames queue at the engine level, and thus don't support external setting's manipulation of the queue size.

No harm in leaving it on though, as it won't have an affect anyway in this case.

Thank you so much for the info! Random question, do you use GFE? Would your recommendations be for it or against it? I am currently not using it and just wondering if this is wise or not.
Top

I don't use GFE or have it installed, no. Nothing against it, just don't need it myself.

If you require/want ShadowPlay, Ansel, Freestyle game filters, Shield streaming, new driver notifications, or automatic game settings configuration, then yeah. If not, then there's definitely no harm (or performance penalty/reduction) in not having it installed.
(jorimt: /jor-uhm-tee/)
Author: Blur Busters "G-SYNC 101" Series

EeK wrote:If you check the results, both the maximum and minimum input lag are increased with a lower framerate, as expected (even though the average remains about the same).

I just wanted to revisit and expound on this chart for clarity (didn't initially have the time to): 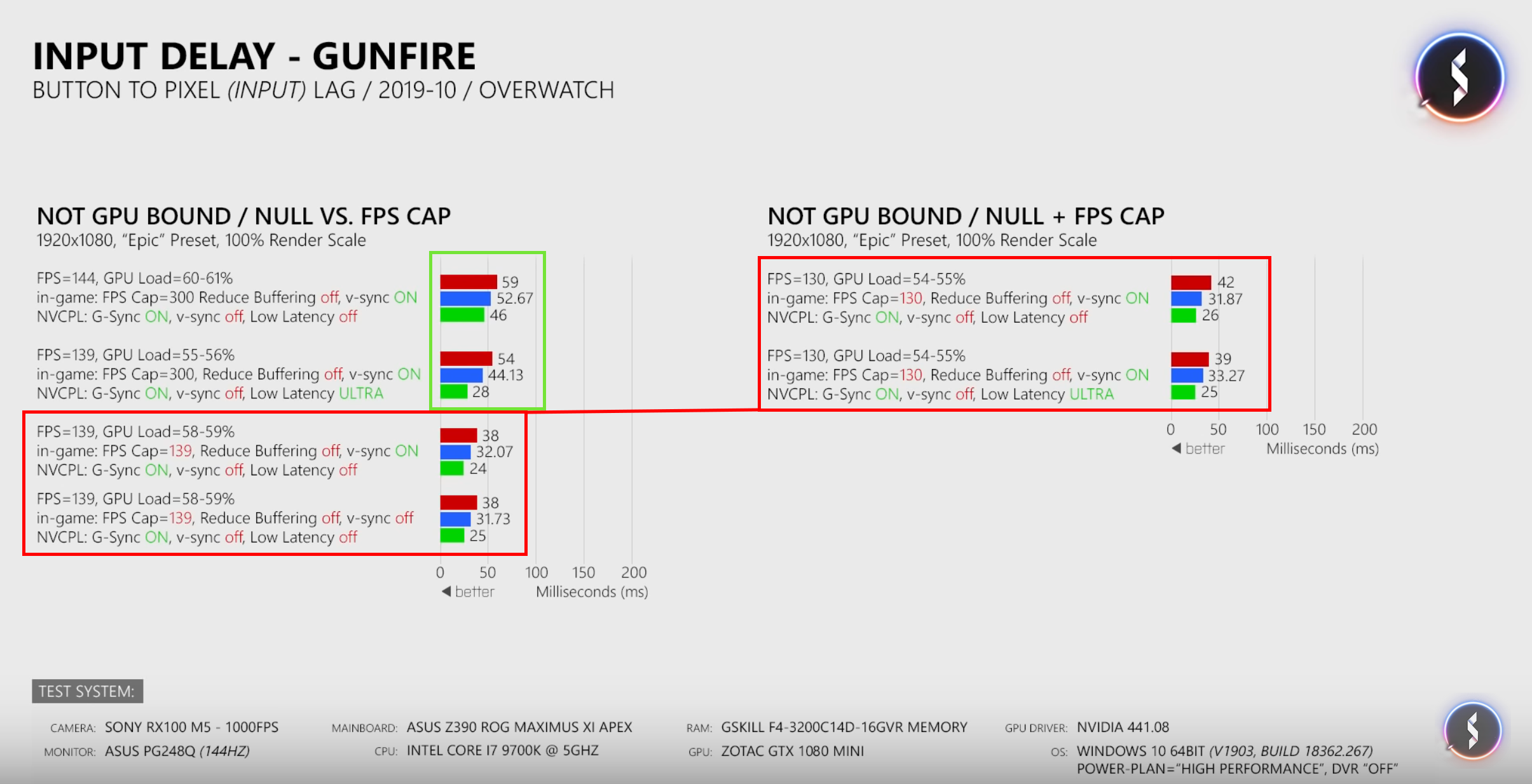 First off, the left three scenarios, second from the top down, were at 139 FPS, because NULL auto caps to 138/139 FPS @144Hz with G-SYNC + V-SYNC, so Chris was simply matching that number with the in-game cap for direct comparison purposes.

Secondly, even though the system is not GPU-bound in these scenarios, the pre-rendered frames queue is still in effect.

It's a fallback. So since the GPU isn't maxed, and has plenty of headroom, the pre-rendered frames queue doesn't need to fill up as much as if the GPU were struggling to keep up, at which point, the CPU would be allowed to prepare more frame information in advance for the GPU.

Why? Again, a good in-game limiter, when used to keep the framerate within the refresh rate, eliminates V-SYNC input lag, keeps the pre-rendered frames queue effectively empty (so long as the framerate is limited by it), and utilizes the lower frametimes of an otherwise unlimited framerate to calculate, render, and deliver them faster.

For the direct purpose of input lag reduction, where and when available, a good in-game limiter is a no brainer (with RTSS obviously being a close runner up due to its steady frametime performance, its "neutral" input lag, and it being more commonly available for use).
(jorimt: /jor-uhm-tee/)
Author: Blur Busters "G-SYNC 101" Series

then you recommend using NULL off or on, I have a 240hz monitor and put vsync in the NPC on, Gsync activated in full screen and cap -3 fps inside the game archives, but I still don't know if NULL is better on or off in this case.
Top

Regarding Low Latency Mode "Ultra" vs. "On" when used in conjunction with G-SYNC + V-SYNC + -3 minimum FPS limit, I'd currently recommend "On" for two reasons:

1. "On" should have the same effect as "Ultra" in compatible games (that don't already have a MPRF queue of "1") in reducing the pre-rendered frames queue and input lag by up to 1 frame whenever your system's framerate drops below your set FPS limit vs. "Off."

2. Since "Ultra" non-optionally auto-caps the FPS at lower values than you can manually set with an FPS limiter, for the direct purposes of point "1" above, you'd have to set your FPS limiter below that when using "Ultra" to prevent it from being the framerate's limiting factor, and allow the in-game (or RTSS) limiter to take effect. At 144Hz, you would need to cap a couple frames below 138, which isn't a big deal, but at 240Hz, "Ultra" will auto-cap the FPS to 224 FPS, which I find a little excessive, so "On" which doesn't auto-cap, but should still reduce the pre-rendered frames queue by the same amount as "Ultra" in GPU-bound situations (within the G-SYNC range) is more suited to such a setup.

I do not have overwatch.

If this graph does not lie, then something is wrong with my system.

I often do not clearly state my thoughts. google translate is far from perfect. And in addition to the translator, I myself am mistaken. Do not take me seriously.
Top
Post Reply
232 posts