Hey, I finally bought a 240hz monitor hoping it would fix my previous problem but it didn't.
I am experiencing 100+ ms frametime spikes randomly throughout rounds in Raibow Six Siege.

Thanks for reading!
Top

I assume this happens even offline & disconnected?

Note about power noise: Power noise can be a cause, but there are usually easier lower-lying apple causes. Power noise induced frametime spikes is a devilishly HARD troubleshoot. Compare Kindergarten to a Ph.D. That's the difference in troubleshooting difficulty, sometimes. Statistically it's hard to know if it's related, but I know at least one PC that kept ECC'ing itself (Error Correcting Code) because of huge amounts of RFI (Radio-Frequency Interference). I've rarely but not non-zero seen ECC-cascades (chain reactions of multiple microsecond events) go into the multiple-milliseconds, creating momentary freeze/slow moments and human-visible stutter problems. It's almost voodoo. Fast-superslow-Fast-superslow-Fast etc. In the real world, that's frametime spikes. Historically noise made a computer crash but with a modern computer stuffed full of ECC logic (USB buses, PCI Express buses, memory chips, etc) to the brim, it's now possible for RFI-surges to cause temporary stalls instead of crashes. It's very rare and probably NOT the cause of your issue, but it's not a 0% chance. Unfortunately since it's usually not the cause of the problem (but sometimes is), it's so devilishly hard to troubleshoot. If you are a "Just In Case Guy", stay away from cheap generic power supplies, use a good more expensive power-factor 95% efficient computer power supply sometimes helps. Don't wire your USB/DisplayPort/highspeed data cables alongside power wires, along walls (that has hidden power wires behind it), or near transformers (your computer power supply or AC adaptor boxes), so redo your cable management behind your computer and move everything 6 inches away from the wall, just in case there's hidden wires or hidden mains-feed (from the power company). Also test your power for ground faults, that's a major source of RFI that has a ~1%-league chance of Rube Goldberging into a chain-reaction itself into frametime spikes. These may just do 100% squat uselessly, but that 1% chance it helps, definitely does not hurt. I almost guarantee it's a wild goose chase to a red herring, so only approach this in a "Be Prepared Like A Scout" manner. Troubleshoot with easier tests that are lower-lying apples.
Head of Blur Busters - BlurBusters.com | TestUFO.com | Follow @BlurBusters on Twitter

Thanks so much for the elaborate explanations! 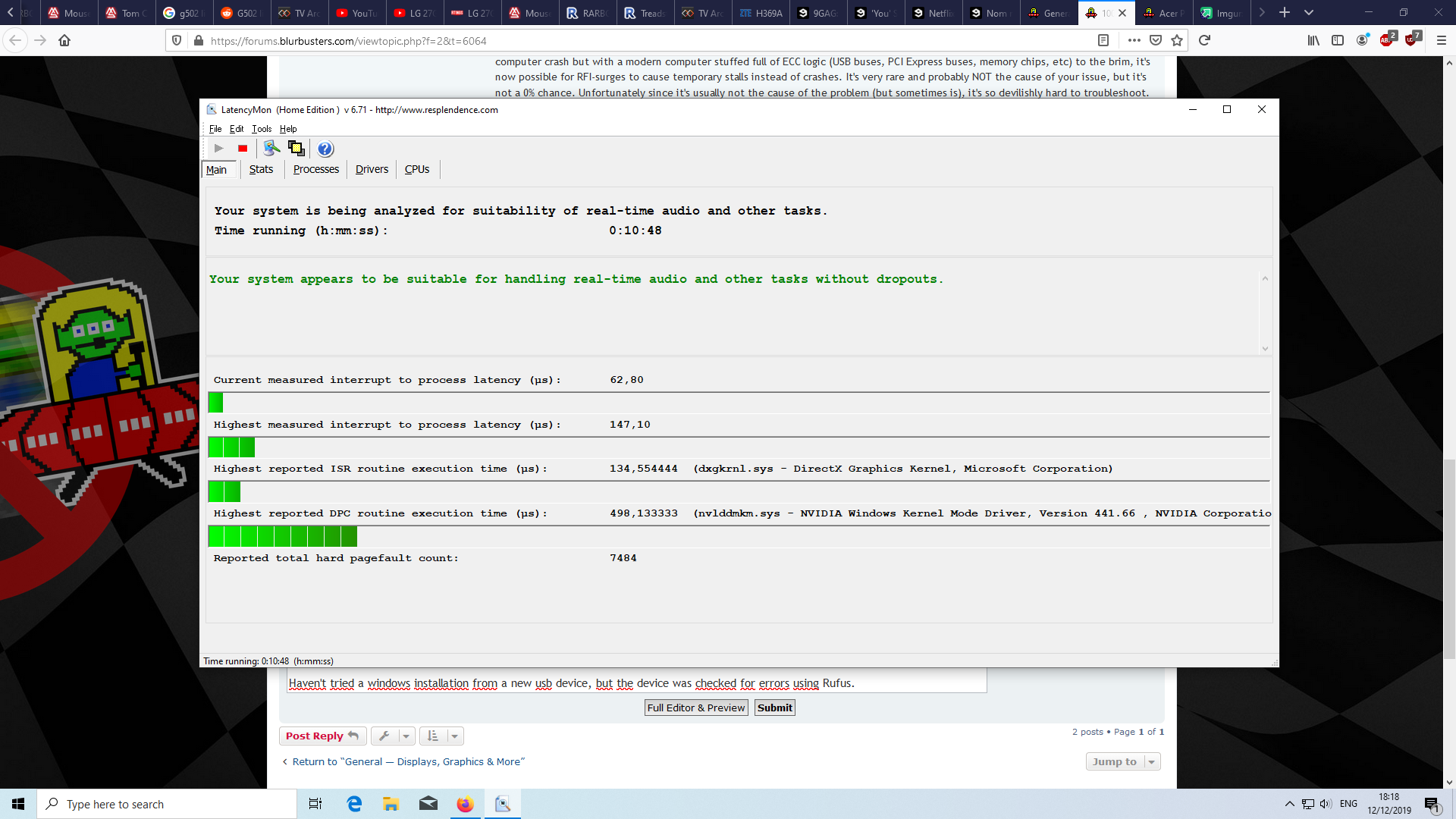 I doubt power is going to cause 100+ ms stalls. Not impossible, but unlikely. I would first rule out BIOS power-saving options or Windows misconfiguration. You seem to be running a newer version of Windows, but all of the recent builds have been progressively getting worse. Did you run Latencymon while playing the game?
Calypto's Latency Guide
Top

Thanks for the reply, I already had optimized my bios and windows but I see a lot of things that I haven't tried in your guide.
Latencymon while playing the game has the same values.
I had the same issue on windows 1803, am now running latest updates.
Top

Also, what is it that automatically makes some assume eSports pros are having flawless experiences 100% of the time? Sans their typically more expensive setups, everything's ultimately made from the same parts, and they're playing the same games with the same engines, so they undoubtedly encounter the same system and engine-level limitations we non-pro gamers do, including frametime spikes.
(jorimt: /jor-uhm-tee/)
Author: Blur Busters "G-SYNC 101" Series

Thanks for the advice!
Top

Because if not, this sort of thing is highly subjective, and the frametime spikes exhibited in your recordings (which, just as a side note, can sometimes introduce frametime issues as well) were brief and infrequent enough that, believe it or not, less sensitive players may not even notice when playing themselves; I have nearly a couple hundred hours in Siege, and I'm pretty sure I get this sometimes too, but I write it off as a blip in the server, etc.
(jorimt: /jor-uhm-tee/)
Author: Blur Busters "G-SYNC 101" Series

I did play siege a bit at his main pc but that was before the 2070 super, used afterburner to monitor with power settings disabled because that could make some spikes in early drivers i think.

I'm also thinking it might just be a server blip, but whenever those happen usually everyone notices it. And for me it happens almost every round, even happens on the main menu where the engine is rendering a 3D scene with 2 character models and a background with some props.
Top

Have you been able to time the intervals on the main menu, or do the occurrences not have a discernible pattern?
(jorimt: /jor-uhm-tee/)
Author: Blur Busters "G-SYNC 101" Series