Been a lurker on this forum since the early lightboost days. Just registered to get some feedback on the latest and greatest. Currently have an ASUS PG258Q 240hz monitor that I bought when it first came out. This was a first gen GSYSNC module monitor although the games (Overwatch, CSGO, League of Legends) I currently play I don't really use it even though even though I have tested the different modes (GSYNC, ULMB, Monitor refresh FPS, uncap FPS but settled on 240hz + Vsync off, ULLM On + uncapped FPS). I run an overclocked system and tweaked my Windows 10 to barebones services to just game on (have a workstation PC for everything else)

I would say that I know the downfalls of TN panels but as far as g2g they are still the fastest from what I can tell (but IPS seems to be catching up). The interesting bit is that the newest IPS models seem to have less over input/signaling delay compared to the newest TN (better responsiveness but more motion blur compared to TN g2g?).

As such, just comparing since it has been a couple years to see if it is worth upgrading to the newer models. Am really interested in the new Asus 360hz but that could be very late this year before it comes out. This is what I have been eyeballing for recent monitors but open to suggestions although I am leaning on the Acer Nitro XF252Q just cause it is the cheapest (don't neccessarily have a budget):

Preferences:
-Lowest G2G
-Lowest Input Lag
-Do not require GSYSNC Module
-Would not mind 240hz capable ULMB/DYAC/etc but not a deal breaker (even though crosstalk is bad at 240hz).

Yea I see that the HP Omen X 25f does seem to have some of the lowest input lag numbers compared to other monitors It is very hard to find a review site that has all these monitors testing and comparing one reviews sites numbers for a specific model compared to another reviewer for a different model is not a fair way to compare since the testing method and tools use differ. That is why I am asking what monitor has the lowest g2g and input lag that might of done more research than myself.

Posting some charts I found from a few places (TFTCentral, Hardware Unboxed, RTINGS) although no one has all the monitors to compare fairly: 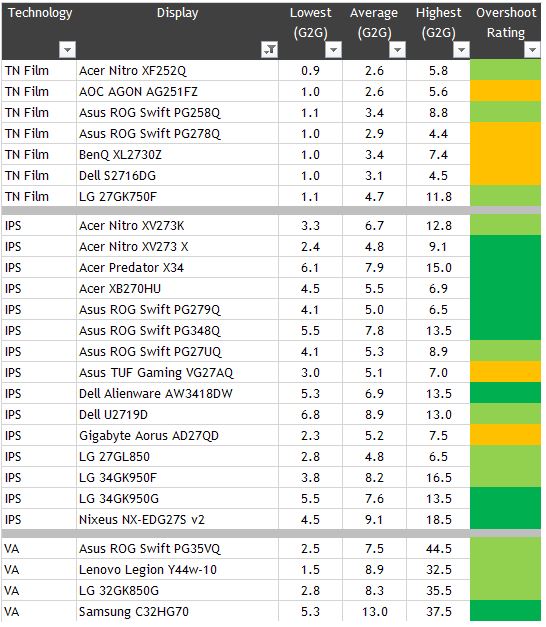 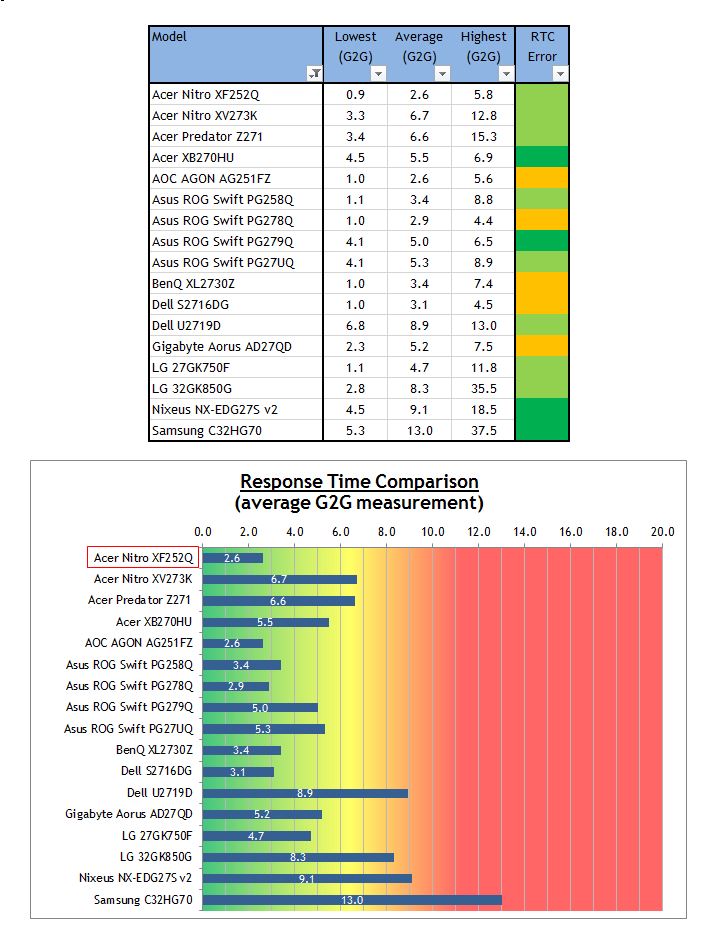 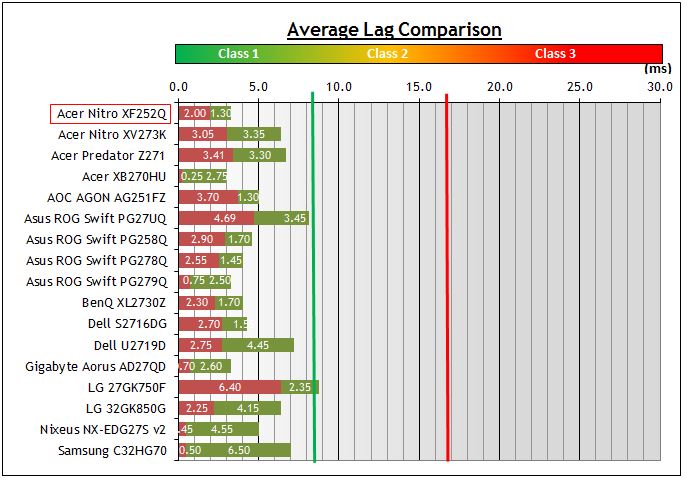 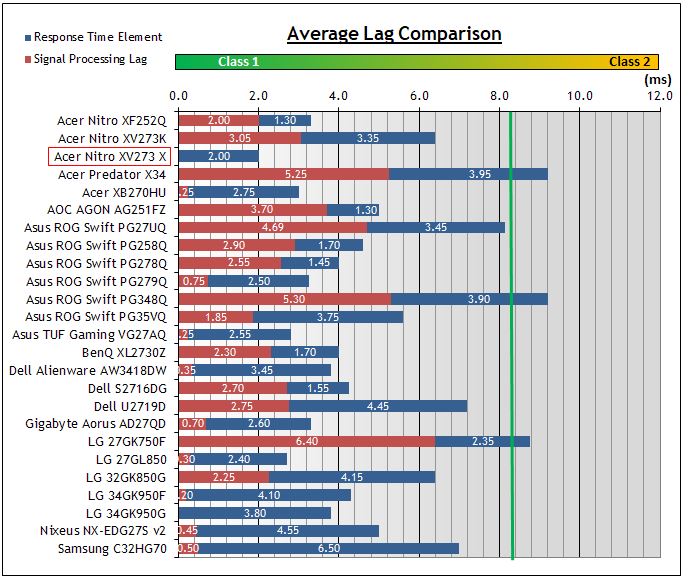 Last of the charts: 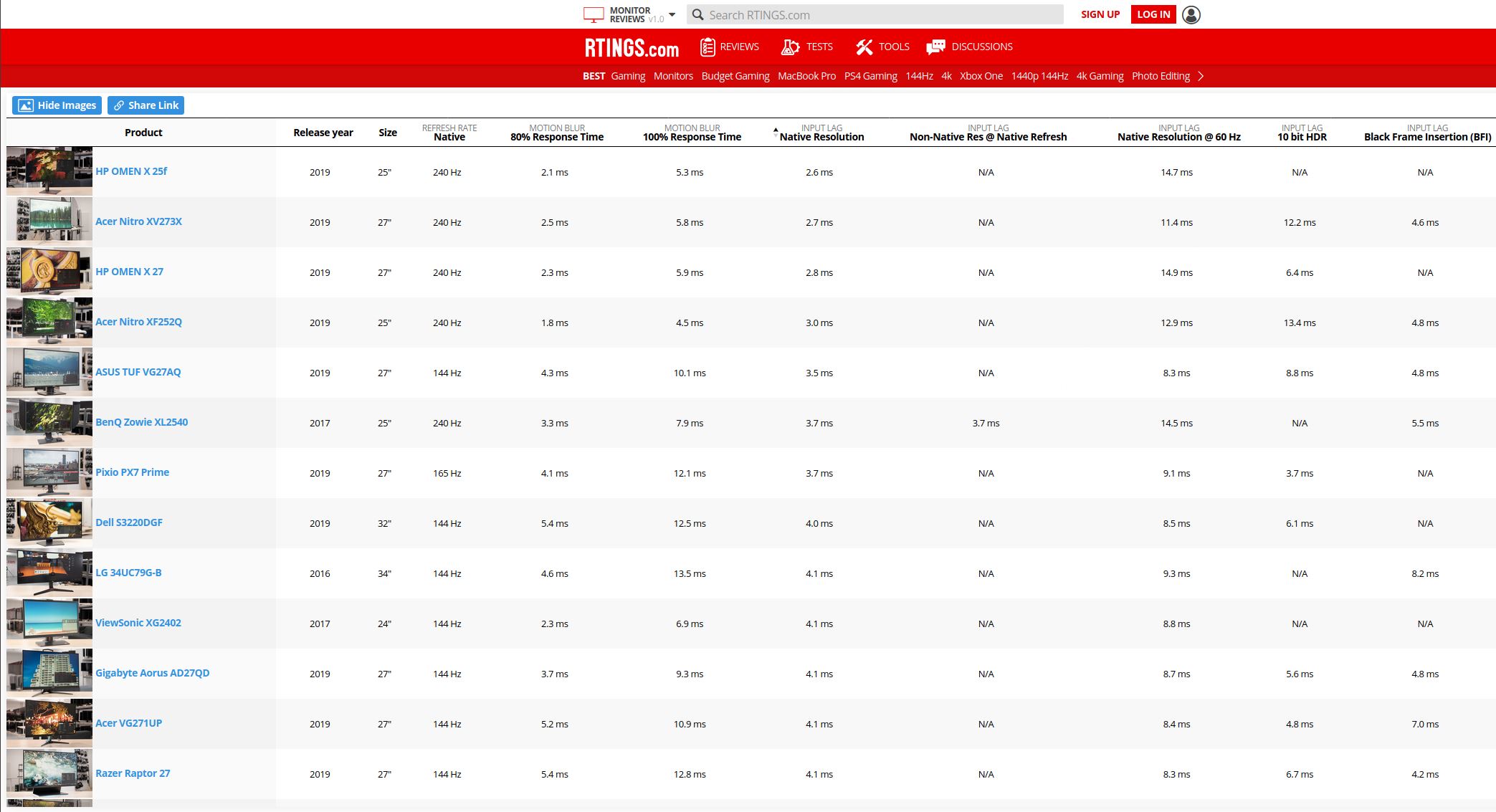 I admit am currently a huge fan of 240Hz-280Hz 1ms IPS, whether it's Blur Busters Approved or not.

IPS is a smidge slow compared to the fastest TN but the best 240Hz 1ms IPS has less ghosting/blur than an average 240Hz 1ms TN now. Sure, a few cherrypicked fast TN models is a gold standard better than 240Hz 1ms IPS.

But I'm impressed that 240Hz 1ms IPS leaped straight into the middle of the TN field (less ghosting than half of 240Hz TNs).

If you're cherrypicking the world's fastest, it's still TN, but buying a random 240Hz TN without looking at benchmarks, then half of the time that particular 240Hz TN slower or more ghosty than the 1ms 240Hz IPS panels that hit the market -- they actually definitely look visually faster than the worst 240Hz TNs (i.e. less ghosting)

The 240Hz 1ms IPS package deal is rather nice -- feels fast and feels just like an average 240Hz TN, but good colors, low strobe crosstalk (if using strobe), low lag that is better than some TN, no viewing angle issues, etc. You're making tradeoffs, but the gains can far exceed the losses. Figuratively speaking, instead of 50% cake-and-eat effect, you're getting 75% of cake-and-eat-it-too, fewer compromises.

Your needs may be different, you may need that extra oomph of TN (and the need is definitely genuine) but many people don't realize how much IPS leaped closer to TN. Just because some GtG combos are slow, the same thing happens on 1ms TN panels too. The leap from 3ms IPS to 1ms IPS is extremely huge and the amount of ghosting is actually that much less (two-thirds fainter ghosting artifacts than the old 3ms 165Hz IPS panels of yesteryear, and roughly one-tenth ghosting visibility of 10-year-old 10ms-rated IPS).
Head of Blur Busters - BlurBusters.com | TestUFO.com | Follow @BlurBusters on Twitter

I'm waiting for this monitor in my country. It seems to be the first 25" 240Hz IPS on the market.
https://www.youtube.com/watch?v=leLp6Qgc6X8
My bad English :0
Top
Post Reply
13 posts