All the 240 Hz 1ms IPS panels are a big upgrade to the common 1080p TN panels in my opinion. The speeds, the latency, and the blur reduction quality are not worse than TN, and the color quality is an overall upgrade. I haven't seen VRB so I have no idea how well Acer tuned their blur reduction.

I should note that in 2020, other manufacturers (including Acer) are able to hire Blur Busters tuning services, currently I have no other 240 Hz 1ms IPS clients at this time of writing.
Head of Blur Busters - BlurBusters.com | TestUFO.com | Follow @BlurBusters on Twitter

Ok, got it. Thanks for replying!
Top

Does the G2G result that TFTCentral got make this worse than the TN 240hz panels for competitive play?
Top

A panel may be 1ms GtG for GtG10->90% for certain colors, but 4ms+ for GtG100%. I have seen slower TN than that for the GtG100% metric, so compare VESA versus VESA, or compare RTings versus RTings, or compare TFTCentral versus TFTCentral. Can’t compare GtG across different GtG measurement technique, as seen in the Pixel Response FAQ.

The human eye can see GtG well before GtG100%. Half 50% GtG means a gray color mid-transition between a black pixel and a white pixel. So 4ms GtG doesn’t mean 4ms latency. The GtG is a window, as a pixel “fades” from one color to the next as seen in high speed videos www.blurbusters.com/scanout

Chief, do you know when the ViewSonic XG270 will be avaliable at europe?
Top

Allot of experts are praising these 240HZ IPS monitors. According to the tftcentral review, only 37% of the pixels are refreshed within the frame window at 240Hz. They include this test UFO:

if you compare this to the pcmonitors review of the Acer XN253Q X, you can see it is significantly more blurry: 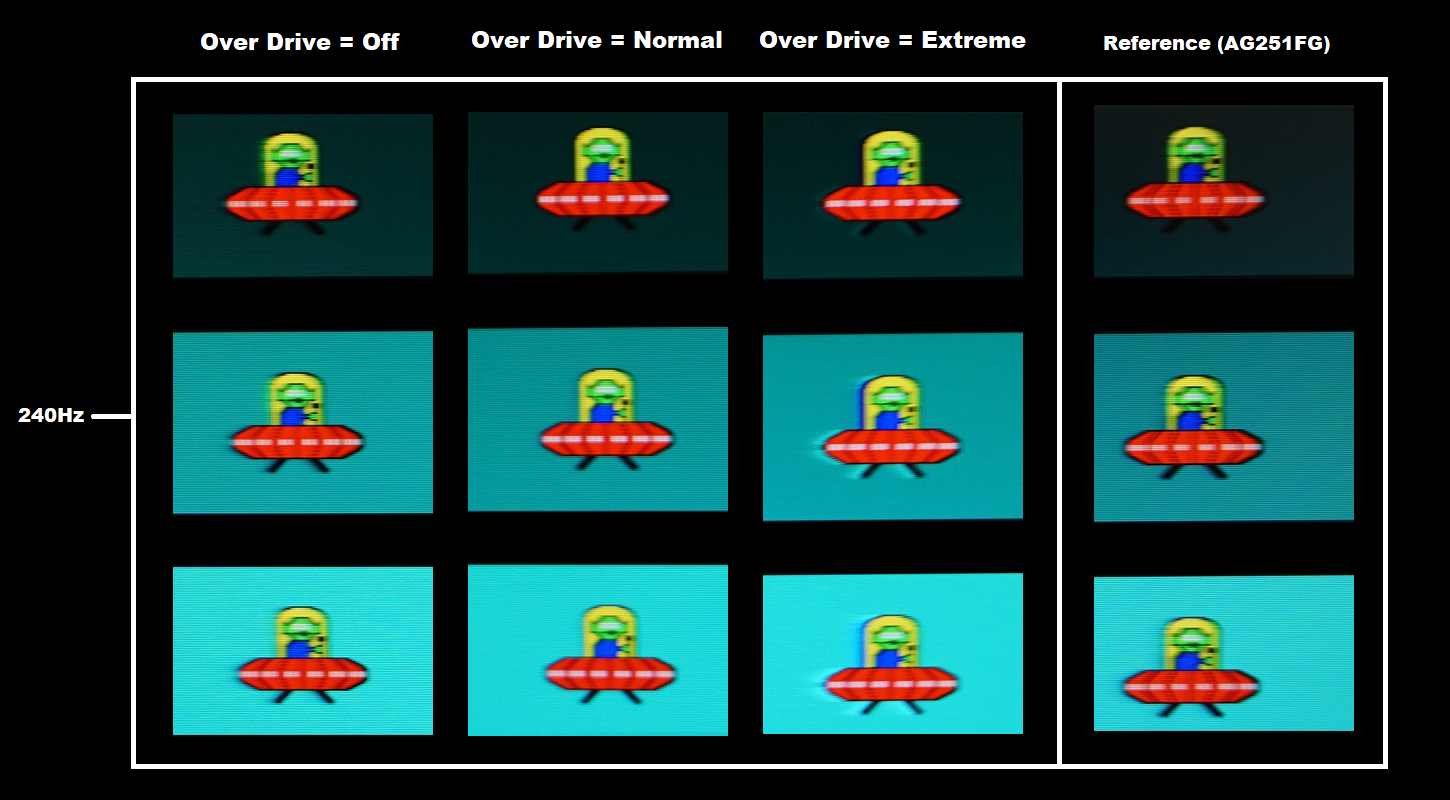 Chief can correct me if I'm wrong, but I think TN panels still have less crosstalk in 240hz.

The ViewSonic panel I just bought, 240hz IPS, does have a tad more overshoot and blur compared to my 240hz TN panel.
Top

The ViewSonic panel I just bought, 240hz IPS, does have a tad more overshoot and blur compared to my 240hz TN panel.

Not all of them -- the quality of strobe crosstalk varies a lot between different 240 Hz TN panels. It's amazing how much the different brands of blur reduction varies, even model-to-model, panel-to-panel. I've seen better TN 240 Hz and I've seen worse 240 Hz. The key thing is that 240Hz 1ms IPS is now finally "within the TN ballpark".

I'm aware you have an XG270 -- compare at 144 Hz and it's quite competitive now. The low-crosstalk strobe modes on PureXP are 75Hz through 144Hz. Currently, 120 Hz is darn near zero crosstalk in virtually all games I'm playing, dark or bright. Enjoying 99% sRGB full color gamut strobed is the bee's knees, avoiding the strobe degradation of old strobe backlights -- keeping full color gamut is not something I often see with strobe backlight modes.

Also, if you prefer high-Hz strobing, try testing PureXP at 180 Hz and 230 Hz. It has noticeably less crosstalk than 240 Hz. You will need to use Custom Resolution to create these refresh rates on 240 Hz IPS panels. The overdrive is noticeably better at 180 Hz and 230 Hz than at 240 Hz, so it's an interesting effect being observed on both TN and IPS panels, and XG270 is no exception. I do not know if Acer behaves in the same way. On the XG270, the "Response Time Overdrive" menu also works better for non-strobed too, when you reduce refresh rate very slightly in order to improve overdrive behavior on some models. (Not all models behave the same)

Also, many 240Hz TN monitors are also, alas, not fully refreshing pixels within the 240Hz window. Thankfully neither IPS/TN is as bad as those 33ms 60Hz LCDs -- zero percent of pixels refreshed within the 60 Hz window!. Remember those bad old LCD days?

Thanks Chief for the reply! I'm curious about this. In order to get a 99% sRGB strobed do I just set the color profile to "sRGB" from the OSD?

One other question I had is you said the best image quality is Pure XP enabled. But why do you feel strobed is superior to that of G-Sync when it comes to image quality? Is there not enough blur reduction in G-Sync mode to get close to CRT motion clarity?
Top
Post Reply
20 posts