I've just received AORUS KD25F and would be happy to answer your questions and get to know that monitor better in the process. I have been using BenQ XL2546 for 6 months and currently deciding if I should keep AORUS KD25F to replace it or return it. I have 7 days to decide.

Do you have a slow motion camera to compare input lag with benq?
Top

It is laggy and overdrive is really bad imo, but we all different. And Benq xl2546 is not an amazing model too, he might prefer the gigabyte one.
Top

how does it feel in competitive games?
have you tried all the overdrive modes?
Top

do0om wrote:Do you have a slow motion camera to compare input lag with benq?

open wrote:how does it feel in competitive games?
have you tried all the overdrive modes?

The first 5 minutes I noticed that KD25F feels much more responsive than XL2456, I play Rainbow Six: Siege competitively (I don't participate in any championships, just for leisure). With it KD25F+Aim Stabilizer I can easily control revolver's recoil, something that was more difficult with XL2456+DyAc before. While shooting automatic riffles, I can see enemies clearly (first time ever muzzle flushes started to annoy me, I've never noticed them before), yet it doesn't affect my aim yet. The only bad thing about this monitor is that when I enable Aim Stabilizer, the screen loses brightness which results in worse picture quality than XL2456 - this might be a deal breaker for me. It's a shame, because KD25F looks so much better in every other aspect, but I'm only using it for gaming with Blur Reduction On, so this monitor might provide worse experience for me.

BlurBoss wrote:I wonder why XL2456 doesn't get darker with Blur Reduction On, while every other monitor does?

The backlight is overvoltaged during flashes, as LEDs can usually safely flash 3x-4x brighter than steady state.

More expensive electronics to engineer, and improper engineering can wear down the LEDs faster. But these produce ~300nits strobed on many 240Hz models, including 25 inch DyAc-branded (BenQ ZOWIE) and 25 inch ULMB-branded 144Hz (240Hz real-NVIDIA) modes are usually brighter than most competition.

That said, you say Aim Stabilizer is lower lag. I wonder what the special sauce is. Do you have a 960fps high speed camera?
Head of Blur Busters - BlurBusters.com | TestUFO.com | Follow @BlurBusters on Twitter

Chief Blur Buster wrote:That said, you say Aim Stabilizer is lower lag. I wonder what the special sauce is. Do you have a 960fps high speed camera?

I only have access to 240 FPS camera. Also I said that with 240 Hz + Aim Stabilizer the picture in motion looks definitely clearer than at 240 Hz + DyAc. Not sure about input lag. Overall KD25F fells more responsive.

I wonder if there's an adjustment setting for Aim Stabilizer that makes it brighter but a bit blurrier.

The ones on BenQ Zowie is more adjustable, it can get as clear as Aim Stabilizer at darker settings -- using Strobe Utility or the Factory Menu to reduce the strobe pulse width (duty cycle) or Persistence setting. Darker but clearer motion.
Head of Blur Busters - BlurBusters.com | TestUFO.com | Follow @BlurBusters on Twitter

There is no such setting in the standard menu, that's for sure. There is an option that allows to change monitor settings from software called "OSD_Sidekick" it has identical settings as monitor's standard menu. I'm attaching the screenshot.
If I could make this monitor brighter with Aim Stabilizer, I would definitely keep it as the picture quality is so good! Almost as good as AORUS AD27QD with much better response time. 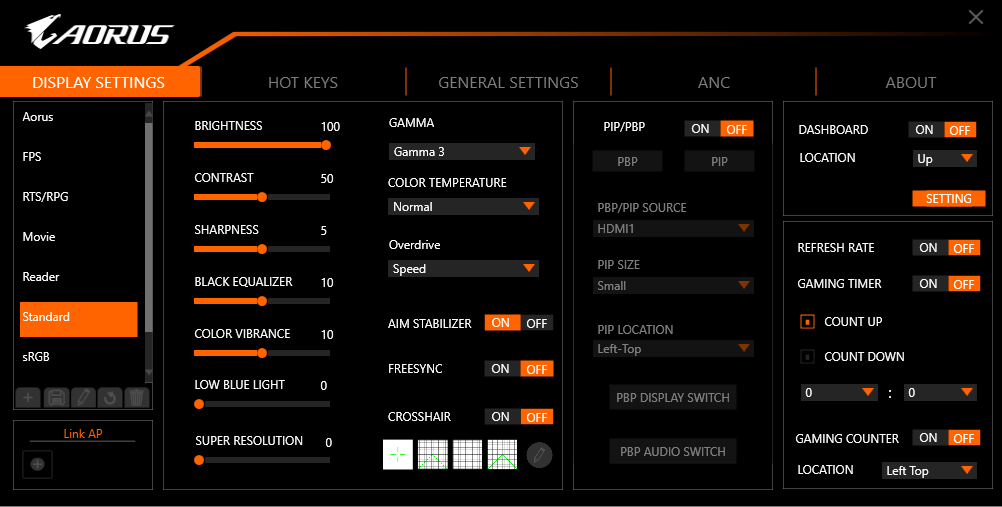