After the previous discussion a while back, I'm wondreing if anyone has hacked FreeSync onto a CRT before, just for kicks?


RealNC wrote:Trick question: what would a variable refresh rate CRT look like?

Like the vector displays. They were variable-refresh-rate displays that had a lower refresh rate when there were more lines on the screen. Gradually flickered more and less in a modulating fashion. The Star Wars vector arcade game (1983) was a variable refresh rate CRT.

A variable-refresh-rate raster CRT display would be kinda like that. The raster CRT display could be simply geometrically thought like a vector display that simply painted a bunch of stacked horizontal lines (while modulating mid-line to create the shades) -- same thing. But the count of lines does not change between refresh cycles, so you would need to lengthen/shorten the time between the refresh cycles.

You'll need a CRT with really strong sync capability. They might already exist, but no experimenting has been done to find out.

Some of them actually could tolerate minor random changes to VHOLD size without noticeable flutter (picture size changes at different refresh rates, etc) -- but I don't think many experiments have been done with true variable refresh rates via raster scanning on CRT. (Just by vector scanning, as refresh rate is a function of the number of vectors, as vectors take time to draw). Some would have no range (goes blank for a moment), others a narrow range (e.g. 0.5Hz) and others might have a shockingly wide range (full spec range) and work with a GSYNC/FreeSync output with an adaptor (which might need a hacked LCD monitor in between the computer and the CRT display).

I'd imagine FreeSync would be easier to "adaptor" to a CRT for testing, given it's able to be tweaked to work over DVI, and FreeSync already kinda uses a sort of a variable blanking interval -- exactly the sort of thing we need. I think it's easier to force FreeSync output to a non-FreeSync display. And there's DVI to VGA adaptors already. Hacker experiment?

Ideally, you want to keep horizontal scan rate fixed & unmodified at a very high rate (the horizontal scan rate of the maximum desired full display refresh rate) and simply vary the number of blank lines in the synchronization interval (i.e. vary the thickness of the VHOLD bar, that black bar you see in a rolling analog TV...) in order to vary the vertical refresh rate. Some CRTs were able to tolerate a minor variance; I wonder if there happens to be some old CRTs with ranges wide enough for FreeSync-adaptor experiments without blankouts or too many picture distortions.

Also, modifying the CRT to suppress it auto-blanking behavior, may be useful -- since we'd be doing much more dramatic refresh rate changes. That could be quite difficult, unless reverse-engineering the microcontroller software built into the CRT, especially if it uses electronics means of handling that. Then again, that's probably not an issue for older CRTs that displayed visual disruption during refresh rate changes.

Either way, disruption can be reduced or eliminated on a CRT, by well-timed sync changes, i.e. gracefully timed exactly during the blanking interval.

CRT with strong multisync support, that can suppress blanking during sync changes, would be good candidates for testing FreeSync on a CRT, with hardware hacking.
Head of Blur Busters - BlurBusters.com | TestUFO.com | Follow @BlurBusters on Twitter

Actually, FreeSync works on a CRT!

Users have successfully run FreeSync on CRT, by user OnnA on Guru3D.

A specific version of ToastyX can force FreeSync on non-VRR connections, with a HDMI-to-VGA adaptor.

interesting. I may explore this at some point

thanks for the heads up
Top

Multisync are generally flexible enough to slew refresh-rate realtime. Not surprising, since vector CRTs could do this. The problem is many CRTs are designed to blank-out during refresh rate changes -- and memorize picture settings for specific refresh rates -- so older CRTs work better with FreeSync than newer CRTs.

Basically the older "dumb type" multisync CRTs that disrupted funny (doesn't blank) during refresh rate changes; those are the ones that works well with FreeSync!

Flicker changes will definitely be an artifact however. The flickerate changes will feel similar to what you saw on the 1982 Star Wars vector arcade machine -- especially when you watched the Death Star explode after your mission (holy flicker, batman!) -- you noticed how the flickering modulated the more/fewer vectors were drawn on the screen. The modulating-flicker effect of FreeSync on CRTs is exactly like that. It is more noticeable and bothersome during sudden framerate changes/slowdowns, but is not bothersome at all during gradual changes of framerates.

Sometimes your range will be tight (e.g. 60-75) but you may get huge ranges such as 56-120 on some multisync CRTs like one person did.

I'd love you to test FreeSync on your old Sony GDM-W900. Just needs ToastyX CRU to force FreeSync on VGA (via HDMI-to-VGA adaptor).
Head of Blur Busters - BlurBusters.com | TestUFO.com | Follow @BlurBusters on Twitter

But yes, will look into this when I get a chance.
Top

It has a smaller dot pitch.

I believe it's a completely different tube. The electron gun optics are probably newer too.

Here's a photo I took of a W900 (silicon rebrand, model GDM 90W11) that was in storage in a lab right across the hall from my own: 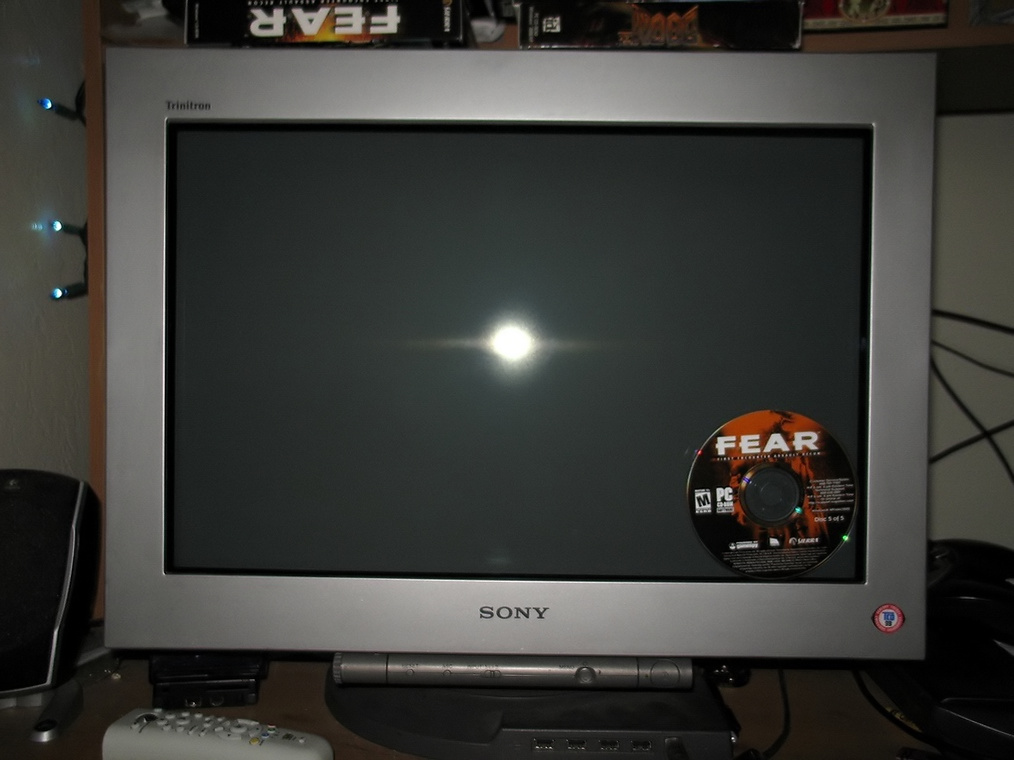 For those who do not understand how FreeSync was found to successfully work on certain CRTs... As a result, this is easily converted to analog format through 'dumb' adaptors such as unbuffered DVI-to-VGA adaptors.

Metaphorically during variable refresh rate operation -- the height of that black bar simply varies -- The rows of pixels still come out at a fixed rate (often called "horizontal scan rate"), but the extra scanlines pads time between refresh cycles. That can vary now during VRR.

This is why FreeSync works on certain 30-year-old multisync CRTs despite having never been tested before -- it's simply a variable-thickness black bar between refresh cycles.

I'm researching HDMI-to-VGA adaptors, to do more testing of this, including this HDMI-to-VGA adaptor. Most likely, dumb adaptors that do an unbuffered 1:1 conversion from HDMI to VGA, are the best ones to use -- the ones that just convert dotclock verbatim to analog, will preserve the synchronization signals of FreeSync fully. Combine this with ToastyX to force VRR out of HDMI, and a supported Radeon card, this will permit VRR testing on CRTs for fun.
Head of Blur Busters - BlurBusters.com | TestUFO.com | Follow @BlurBusters on Twitter

Crossposted here from another forum, to answer people questions about mode-change blankout problems.

1. Traditional resolution changes are often unsynchronized
They are sometimes interrupted into the middle of a refresh cycle, triggering a monitor into a mode change. Traditional resolution changes may also blank the signal (like a tiny, brief sleep). There is no guarantee how the mode change is seamlessly spliced into the cable bitstream. The new VBI must be perfectly seamlessly spliced between refresh cycles. Only FreeSync can guarantee perfectly synchronized equivalent of a "subtle mode change" at the cable signal level. Also, adaptors must not interfere with mode changes (unwanted scan conversions or timings modifications).
CRT FreeSync compatibility not ruled out

2. There are different ways to vary the height of VBI.
The VBI black bar is a grand total (Front Porch + Sync + Back Porch) in number of scan lines. In an analog signal, porches are slightly below NTSC black while Sync is often much below NTSC black (far below the reference voltage of active-picture black). Porches act as temporal padding between active image and the sync signal, for synchronization electronics. FreeSync only changes one number of the three, and leaves the other two number untouched. This can bypass blankout electronics.
CRT FreeSync compatibility not ruled out

3. Arbitrary electronic blankout trigger thresholds may be too strict.
It is possible that monitor safeguards electronically even on this. Monitor blank-out is an unwanted side effect that affects newer MultiSync monitors. FreeSync may be easier on the older GDM-W900 than the newer FW900, since you do not want the monitor electronics to be fussy and "play bad cop" doing unnecessary blankouts on perfectly-synchronized VBI-size-change. Otherwise, monitor blank-out electronics (whether linear-electronics-driven blankout or a firmware triggered blankout) makes FreeSync impossible on a specific true MultiSync CRT.
CRT FreeSync is SOL for specific monitor model until blankout is overriden (open up monitor, or modify firmware, etc)

4. Slew rate of refresh rate changes
Some blankout electronics ignores perfectly synchronized FreeSync changes. Also, for some CRT monitors, slew-rate can be important for CRT FreeSync (actual gameplay with gently modulating framerates may not cause blankout, but bringing up a menu, or sudden framerate stall might). When playing a game, turning from a wall to a complex scene, often gives you gradually increasing/decreasing framerate (= refreshrate). This can be far below the threshold of a specific CRT monitor's arbitrary firmware-hardcoded mode-change electronic blankout trigger. In addition, reducing FreeSync range slightly (10%) also can fix slew-rate-induced blankouts on some CRTs
CRT FreeSync compatibility not ruled out

In ToastyX, you create the highest Hz, then force it over HDMI. Configure the FreeSync range. FreeSync/VESA Adaptive-Sync just increases one number to reduce Hz. (Currently, I believe it's Sync that is varied)

You need a dumb unbuffered adaptor for a proper 1:1 analog-digital conversion of FreeSync with no adaptor processing sheningians. The easiest for CRT FreeSync is a VGA-HDMI adaptor, not a VGA-DisplayPort adaptor,
Head of Blur Busters - BlurBusters.com | TestUFO.com | Follow @BlurBusters on Twitter