Hello.
Apologies for my english.

I have an AOC G2460PG.
Sometimes in motion I can see pixelated patterns everywhere on the screen. Its hard to explain, looks like abnorman colors (subpixels) on a single-color backgrounds.
Most interesting thing: it can only be observed when i follow my eyes accordingly to the motion.
I took some pfotos:

1-st photo in album - moving image and not moving (static) camera. Everything looks fine, as it should.
2-nd photo in album - same moving image but with dynamic camera (camera follows the image) - and here it is, the effect i talk about. Single-colored backgrounds not single-colored anymore - on yellow its colorfull mess; blue and red - different brightness with obvious patterns - vertical conglomerates of bright pixels (2-offs).

And that effect is really easy to spot with naked eye! even at a 1 meter distance from monitor.
So, how does it called? FRC, maybe? since its not true 8-bit panel. I never seen anything like this on a different monitors. Btw not like i saw many.

Is it okay for TN panels? I contacted AOC support but they didnt answer
Top 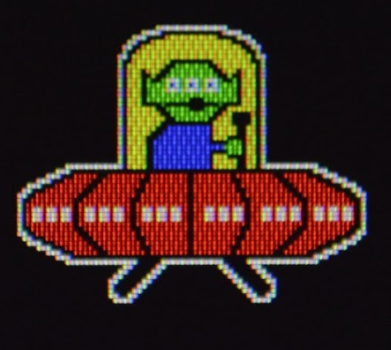 FRC is different, it usually uses random-dither or complex patterns.
Inversion artifacts is usually checkerboard-texturing in solid colors, or vertical-line / horizontal-line textures.
Sometimes FRC and inversion interact with each other, but this isn't happening in these photos.

To greatly reduce visibility of this, you will need to purchase IPS panels (more motion blur). Sometimes, the faster the pixel response, the more pronounced inversion artifacts can sometimes become -- but it varies quite widely.

Also, sometimes strobe modes or 144Hz can amplify visibility of inversion artifacts especially during odd-pixel-step motion (e.g. 1/3/5/7/9/11/13/15 pixels per frame). I've seen some TN panels do it almost as good as IPS monitors, but not reliably enough to make specific recommendations.

That's why TestUFO shows more inversion artifacts at 144Hz (7 pixel step) than at 120Hz (8 pixel step). It is much more visible during Black Frame Insertion or ULMB, and will be especially amplified at http://www.testufo.com/blackframes .... TestUFO aims for a speed of 960 pixels per second as close as possible, which translates to 8ppf for 120Hz and 7ppf for 144Hz.

Inversion is a normal feature of LCDs to prevent image retention, and inversion artifacts are the visible side effects. Sometimes, inversion is unusually visible (e.g. 10x more visible than an average TN) and that's cause for a warranty claim. However, your photo seems to indicate average inversion visibility for most inexpensive 144Hz TN panels. I've seen better, but your photo doesn't appear to reach "warranty-claim" levels of inversion -- par for the course.

Also, during GSYNC operation, inversion sometimes becomes more invisible at higher refresh rates, and amplifies only at lower refresh rates. It depends on the monitor.

You will probably get purple/green for your specific TN panel at http://www.testufo.com/inversion .... That is also normal on TN panels.

Inversion artifacts are normal for TN panels at this photographed level during 144Hz 7ppf motion speed
Change motion speed to an even-number "Pixel Per Frame", by changing motion speed or switching refresh rates

Well, this is one of the best answers I ever get on my question!
Thanks for your time, now im gonna read some material you linked
Top
Post Reply
3 posts • Page 1 of 1